A tribute to Toni Morrison

In the midst of the very sad news that author Toni Morrison passed away on 5 August 2019, aged 88 years old, we shine a light on one of Morrison’s many items held in the Library’s collection: the beautiful, ‘Five Poems’ – a fine press book with illustrations by Kara Walker.

Toni Morrison was born Chloe Anthony Wofford on 18 February 1931 in Lorain, Ohio. Her portrayal of the black female experience through her writing has moved readers around the world for more than 50 years, and will continue to do so. The Bluest Eye was published in 1970 and would become a Nobel Prize winner, and further bestselling novels would follow, namely Song of Solomon (1977), Beloved (1987) and Jazz (1992). It was not long before Morrison and her work were established firmly as ‘part of the fabric of American life … woven into high school syllabuses up and down the country’ (Richard Lea, The Guardian). Alongside her Nobel Prize, Morrison would be honoured with the Pulitzer Prize and a Presidential Medal of Freedom in celebration of her literary achievements during her lifetime. 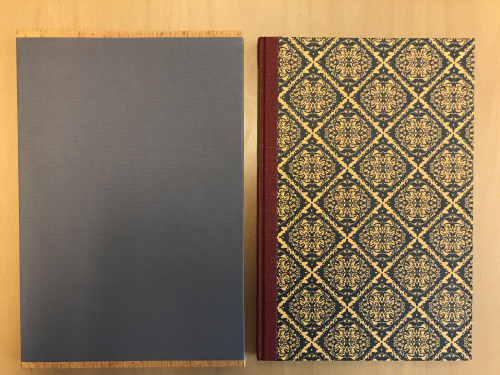 Upon joining the Americas Team just one month ago, one of the first treasures a colleague introduced me to was Five Poems (RF.2019.b.96) – a breath-taking fine press book compiled of Toni Morrison’s words and illustrations by Kara Walker. As I began to turn the pages, I was intrigued (and blown away) to say the least. ‘I never knew Toni Morrison wrote poetry’ I thought, careful not to share out loud for fear of making a fool of myself in front of my new team of experts. But upon closer investigation of the book, I realised there was perhaps a reason for this oversight of mine… 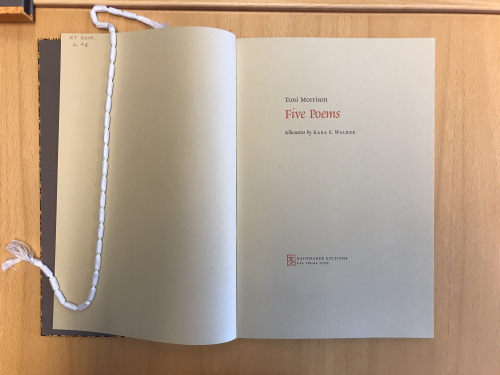 Published in a limited run by Rainmaker Editions of Las Vegas, between the large books’ pages readers will be entranced by ‘Eve Remembering’, ‘The Perfect Ease of Grain’, ‘Someone Leans Near’, ‘It Comes Unadorned’ and ‘I Am Not Seaworthy’. Five short poems which compile Morrison’s only poetry book, alongside them are silhouette illustrations from the New York-based artist, Kara Walker.

Reading an article by Stephanie Li (‘Five Poems: The Gospel According to Toni Morrison’) in a bid to find out more, it transpires that, at the time of Li's research, ‘in the numerous interviews Morrison has given since the publication of Five Poems she [Morrison] has never mentioned the book or discussed her approach to writing poetry’ (p 899). 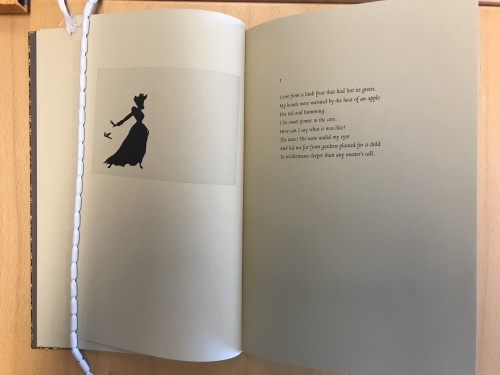 The book is said to have come about thanks to Wole Soyinka (the playwright, poet and essayist) who invited ‘Morrison … on behalf of Rainmaker Editions to submit an original unpublished manuscript. Morrison sent five short poems, the full text of the collection’ (p 899). Upon receiving the manuscript, the book’s designer, Peter Rutledge Koch, suggested that illustrations be included as well. Si explains that Kara Walker, whose work explores themes of gender, race and ethnicity, has often praised Morrison and the influence the author had on Walker’s own creativity; Koch saw the potential for the two artists’ work to complement each other in this endeavour. Walker was contacted and the book was made with Morrison’s words and Walker’s five relief prints side by side.

This edition is one of the 425 issues printed and has been signed by the author, illustrator and binder. It really is a fusion of skill, care and total masterfulness from across the United States. Alongside the contributions from Morrison and Walker, Peter Koch Printers printed letterpress from digital imaging and photo-polymer plates in Berkley, California, while the binding and housing was done by Jace Graf at Cloverleaf Studio, Austen, Texas. It’s a work of art in every sense. 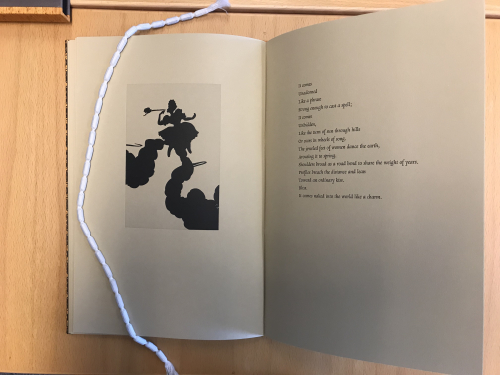 It is with great sadness that we have lost one of the world’s, not just America’s, most prolific writers. As chance would have it I’m currently reading Jazz and I’ll be sure to savour Morrison’s storytelling even more than normal during the commute home this evening, on a train journey that will be tinged with more than a little melancholy.