Eisenhower to Obama and beyond: new US political material now available to researchers

While many may be captivated by the US political scene today (and its constant evolution), I recently lost myself in over 60 years of American electoral history while working on a new donation to the Library.

Philip J Davies (Professor Emeritus of American Studies, De Montfort University and Former Director for the Eccles Centre for American Studies here at the British Library) has donated a rich collection of material which can now be viewed in our Reading Rooms. Featuring promotional political material for US presidential election campaigns from 1952 to 2018, the collection is an invaluable new resource for researchers. With material right up to the Obama, Clinton and Trump eras, it’s sure to provide an interesting and intriguing picture of the current political landscape for years to come. 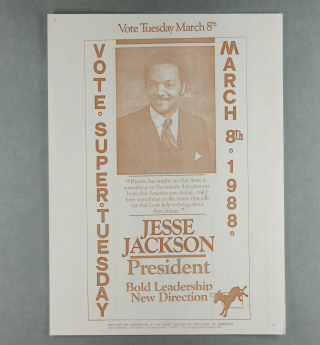 On donating the collection Philip said: ‘It is a pleasure to see this small collection reach the British Library.  When I started teaching US politics at Manchester University in the 1970s only a few students had been able to visit the USA.  I found that using a few real campaign items helped our discussions and gave more tangibility to the subject.  I hope that the materials give some sense of the three-dimensional, ground-level reality of US presidential campaigns at a time when we have grown used to experiencing them on the TV and through computer screens.’

There are over 100 items available to explore from a giant Obama inauguration placard and video content encouraging young people to vote (featuring the likes of John Legend) to through-the-door propaganda collected from a number of US states. Sifting through this vast collection it’s amazing to see how the promotion and slamming of electoral candidates has changed over decades and into new millennia – while in some ways not changed at all.

A handful of the topics covered amongst the plethora of material are gun crime, same-sex marriage, war veteran care and climate change. While just some items researchers may find of particular interest include a nomination petition form for Dwight D. Eisenhower from 1952, a 1988 Jesse Jackson poster (pictured above), a 1980 Reagan Campaign Leadership Manual including volunteer phone script (pictured below), and an (unused) official invitation to the inauguration of President Donald Trump. 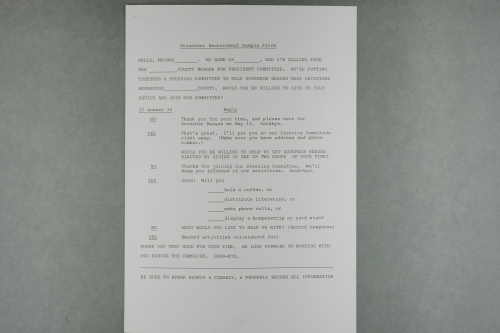 Too many to name individually, but on examining this treasure trove of historical and political paraphernalia I was particularly struck by a few items:

The power of Lenora Fulani

As part of the New Alliance Party in the 1988 presidential elections Fulani was the first woman and the first African American to achieve ballot access in the fifty states. The archive contains Membership cards for the Party, a pamphlet for the campaigning committee for fair elections, and leaflets on The Black Agenda and Independent Politics. 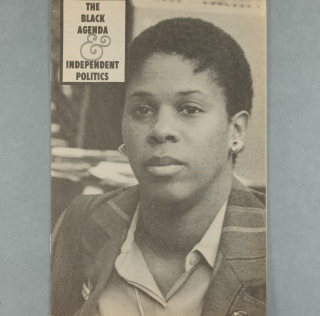 This placard designed for front yard display reads ‘Ovide End Public Kindergarten’. You might think this is a rather negative promotion of one’s policies. And you’d be right. Ovide Lamontagne was a Republican candidate for Governor in New Hampshire in 2012. This poster was produced by the Democrats in Ovide's style to lampoon his politics (by their interpretation). Ovide lost the vote. 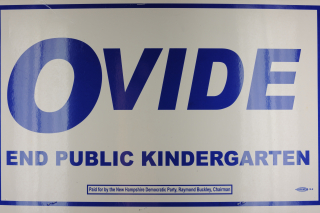 Make your own… Obama paper doll

Who says American politics is no place for fun and games? Marking the moment in history when Barack Obama won the 2008 election this collectable booklet lets you dress the President, the First Lady and their two daughters in an array of outfits worn throughout the campaign. My personal favourite: Barack in his best basketball gear. 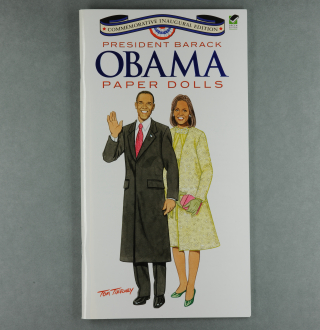 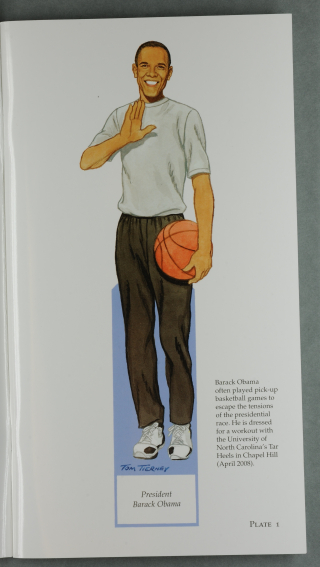 The Philip Davies Collection of US election archive material (Add MS 89357) is now available to view in Reading Rooms at St Pancras and Boston Spa. Find out more by searching for ‘89357’ in our Archives and Manuscripts catalogue. If you use any of the items for your research, we’d love to hear about it. Let us know using @BL_Americas.