‘To Robert Frank I now give this message: You got eyes’

And who would disagree with Jack Kerouac’s assessment of the Swiss-born American photographer, who died at the age of 94 on 9th September. There have already been numerous obits etc on Frank by others more expert on the subject than me, so I thought I would just take a brief look at the publishing history of Frank’s most well-known book -The Americans.

Frank was awarded a Guggenheim fellowship in 1955 for his project 'to photograph freely throughout the United States, using the miniature camera exclusively…,' his application having gained support from a number of photographer luminaries such as Walker Evans and Edward Steichen. The funding enabled him to make several trips from New York over 1955/56, including one 8 month trip to the West Coast in a 1950 Ford Coupe. Frank took over 20,000 images on nearly 800 rolls of 35 mm film, many of them being processed and contact printed en route, which no doubt enabled him to more easily review and develop some of the themes which recur in his work – symbols of popular culture, race and class, religion, music etc. Frank later wrote “I have attempted to show a cross-section of the American population. My effort was to express it simply and without confusion. The view is personal….” (quoted in The Book of 101 Books, edited by Andrew Roth, PPP Editions, New York, 2001, p.150).

Thirty-three of these photos appeared at the end of 1957 in US Camera Annual, but Frank's intention had always been to produce a book. From his huge collection of images, he somehow managed to select just eighty-three photos, but finding a publisher proved to be even more difficult. It was Frank’s friend Robert Delpire, the influential Paris-based art publisher, editor and curator, who was eventually to publish ‘Les Américains’ in 1958. It’s interesting to take a closer look at this first edition since it’s a very different book to the later and much better known American edition, even though the photos and the sequence of them is exactly the same. Delpire had a strong interest in documentary photography - and his own distinct vision for the book. In addition to contributing his own writing, Alain Bosquet (poet, novelist and translator) gathered together texts by writers as diverse as Simone de Beauvoir, Erskine Caldwell, John Dos Passos, Benjamin Franklin, Abraham Lincoln, Richard Wright, Walt Whitman and many many more to accompany the photos. Appearing in Delpire’s Encyclopédie Essentielle series in 1958, Les Américains also includes sections on significant dates in US history, population statistics, and encompasses themes such as politics, religion and so on. Frank’s photographs therefore become more like illustrations to a sociological and political text. Each photo faces a page of text and our reading of the photos is inevitably influenced by what appears in that text. As David Levi Strauss has commented, ‘That powerful image from Dolores Park in San Francisco where the African American couple turns toward the camera in anger is wholly influenced by the facing page quotes from Faulkner and John Brown (The Book of 101 Books as above). As you will also see from the below image, no photograph was included on the cover, rather it has some drawings by Saul Steinberg. 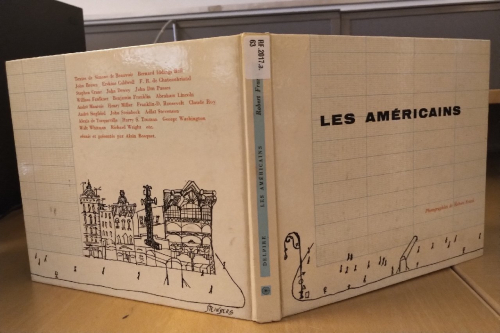 It’s not surprisingly that Frank wasn’t overly happy about this edition, and sought to persuade Grove Press to publish an American edition. Fortunately he was successful and this time all the texts were removed, not least because some of them were considered too critical of the US, un-American in fact. For this we can be thankful. As already mentioned, the eighty-three photos and their sequencing remain the same, but now each photo is opposite a white page, blank save for a small caption which provides the location of each image (much like the format of Walker Evans’ earlier and influential American Photographs, which Frank so admired). Now we have the space to appreciate the photographs and we can interpret just as we want all those images of flags, funerals, cars, jukeboxes and so on. The one other difference is that this edition, of course, carries an introduction by Jack Kerouac. The two men had met at a party in 1957 and Frank had shown Kerouac some of the photos from his road trips. It’s not hard to imagine why they had appealed to Kerouac, whose novel On The Road appeared in September of that year. ‘The humor, the sadness, the EVERYTHING-ness and American-ness of these pictures!’ The introduction is an almost perfect accompaniment, and also helped to situate Frank as a part of the Beat Generation. In fact, by the time the edition appeared in 1959, Frank was already exploring the medium of film and was making Pull My Daisy with Kerouac, Allen Ginsberg, Gregory Corso et al.

Surprising as it might now seem, the reception of The Americans on publication was quite mixed. Some people loved it, but it also attracted a lot of criticism, both for the quality of the images (described as blurry and grainy) but also some considered it to promote a too negative view of America. It is also hard to believe that the MOMA bookshop even refused to stock it at first. Of course now it has become one of the most influential and celebrated photobooks of the Twentieth Century. As David Campany has written, it was a survey of ‘all that seemed uncomfortable in the American psyche, captured by a photographer with a rare ability to turn the most unpromising moments into new symbols,’ describing it as the ‘visual equivalent to jazz’. (David Campany, The Open Road, Aperture, 2014, p.25). The jazz analogy often appears in writing on the book, and I particularly like this sentence on the sequencing of the photos from Martin Parr and Gerry Badger’s The Photobook: a history, vol. 1. ‘Ideas ebb and flow, are introduced, discarded, recapitulated, transfigured, transposed, played off and piled up against each other with the exuberant energy of a Charlie Parker saxophone solo.’ (Phaidon 2004, p.247).

Sadly the BL does not have a copy of the first edition of The Americans since what we now refer to as photobooks were usually not considered for acquisition for the old reference collections in the past. Consequently, the only copies of many American photobooks that we have are often in what used to be the old lending collections. Some gaps have been filled more recently but first editions are usually too expensive these days as they have become so collectable. At the end of the day, it’s the images that you want so reprints still work for many purposes.  In this case, the Library has an Aperture edition from 1969 (shelfmark AL69/4991) which includes a section of filmstrip images at the end (Frank comments that they ‘represent for me the continuation of my work’) plus several later reprints and editions. We do, however, have Les Américains (Shelfmark RF.2017.a.63). David Levi Strauss has said that ‘The French edition is sociology, the American edition is poetry.’ You can look at them both and decide for yourself.

I started with Kerouac so I’ll end with him too:

‘Robert Frank, Swiss, unobtrusive, nice, with that little camera that he raises and snaps with one hand he sucked a sad poem right out of America onto film, taking rank among the tragic poets of the world!’ 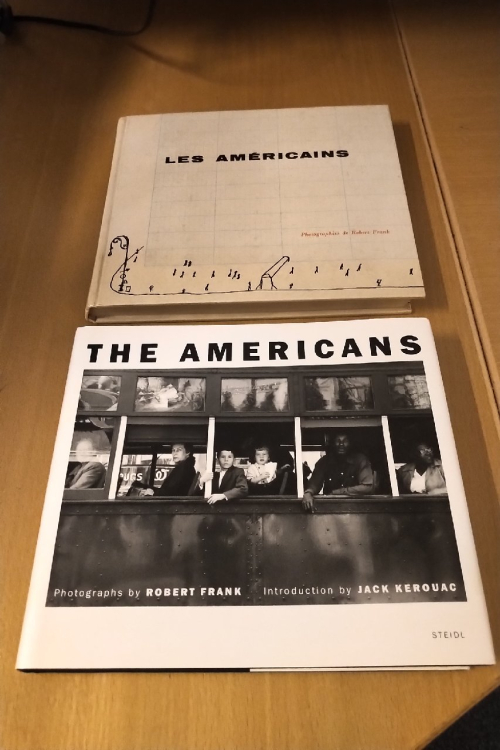 (above copy of The Americans is my own copy of the 50th anniversary edition, published by Steidl in 2008)

Posted by Mercedes Aguirre at 10:22 AM