For the third year running the British Library has worked with the British Council for Fashion on a Research Collaboration Project and this year radical Glaswegian designer, Charles Jeffrey, joined forces. To mark the start of this collaboration, a catwalk show of Jeffrey’s brand Loverboy SS20 collection ‘Mind’s Instructions’ was staged at the Library earlier in the year. This was followed by a Masterclass in October organised for BA final year and MA students, and a launch of the Research Competition.

Charles Jeffrey considers knowledge to be a ‘form of armor’. His brief instructs students to compile a research-focused fashion portfolio inspired by the British Library resources. A show and tell is an interactive part of the Masterclass which is run as part of the project. It gives curators the opportunity to engage with students and inspire them with samples of particularly visually intriguing collection items. In this blog post the Americas team have selected some of the most popular items shown on the day. You can see the selections from the European team on their blog on the same topic. It is not surprising that items featuring colours, patterns and poetry appealed to fashion students the most. The designs will reveal whether ‘Perhaps peace can still be found in the beautiful and the unexplained?’ as Jeffrey Charles states in his brief. 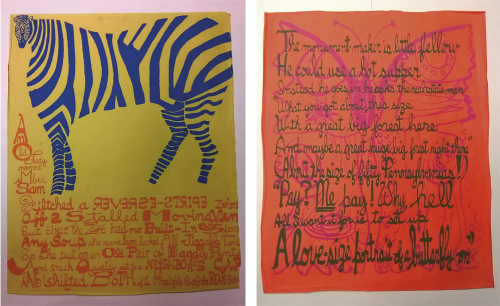 Published in the United States in the summer of 1955, although the exact location and publisher remains ambiguous, this vibrant collection of 18 poems from the original manuscript pages of American poet Kenneth Patchen features decorations and drawings reproduced through silk screening.

Various flora and fauna, including birds, turtles, butterflies and a zebra, and looping elaborate script, adorn the pages of delicate Japanese paper. Only 200 copies, all hand-run, were produced by Frank Bacher. Patchen became well-known in poetry circles for reading his work with jazz as an accompaniment, and you can almost hear the colourful play and rhythm of the words jump up from the page thanks to Bacher’s lively and rich reproduction.

We chose this item for the show and tell not just for its visual appeal, but also because we thought its use of materials, textures and techniques might spur some inspiration. For those interested in the materiality of books and the book form, there is a thematic vein of such amongst a number of artists’ books held at the Library including metal books (like HS.74/2323), wax books (such as RF.2018.a.56) and even coffee-stained books (see Cup.550.g.669). 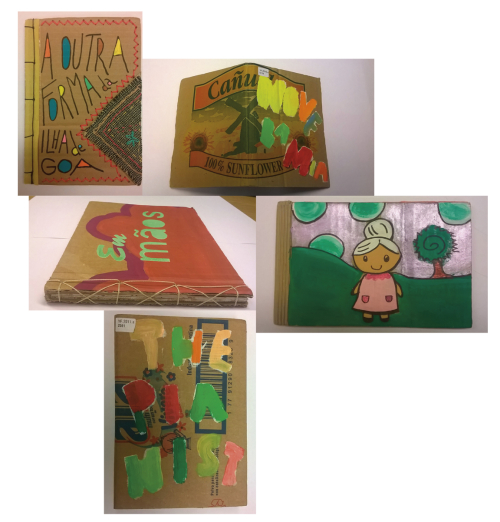 As history has often taught, there are always unexpected opportunities that arise from moments of crisis. The Cartonera phenomenon is a happy Fenix arising from the cardboards piles of the streets.

When Argentina, experienced the great economic depression of the years 1998-2002,  with the consequence of a huge job loss, and the obvious recession of the publishing and cultural sectors,  people started pouring out the streets not only for rioting but also to find an alternative way of life.

Cardboard pickers, cartoneros, started collecting paper and cardboard from the street finding the selling profitable. Eloísa Cartonera, became the first Cartonera publisher that, from 2001-2, started producing books “con cartón comprado a los cartoneros en la vía pública” (with cardboard bought from the cardboard pickers from the streets), although this is not a completely new phenomenon since it arguably takes its primordial roots from the 70’.

The aim of the Cartonera publishers was, since the beginning, to spread poetry and literature at a mass level in Latin America, and at a very low price.

Since then very well established writers, artists and poets, have donated or created for the cause, such as Washington Cucurto. A founder of Eloisa Cartonera and cult author whose realism compositions feature negritude, poverty and homosexuality in Latin America.

I selected the hand-made Cartonera books for the show and tell for the visual aspect of their recycled appeal alongside their inspiring potential to open the scope for creativity.

The Fashion Research Competition and the staff favourite winners will be announced on 31 January when, during a reverse show and tell, students will reveal/show their work inspired by the British Library collections.