Inspired by George Goodwin’s recent American Collections blog and its reference to A Christmas Carol – and ignoring Jill’s protestations in a recent episode of ‘The Archers’ – now is the perfect time to indulge in some ghost stories. And if the indulgence is going to be American, there are few better choices than Shirley Jackson’s The Haunting of Hill House (1959). 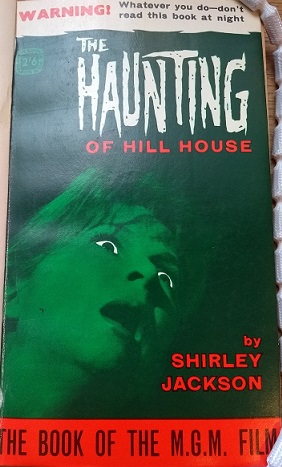 Jackson first came to the public’s attention with ‘The Lottery’, a short story published in The New Yorker in June 1948.1 With its hopeful title and shocking twist, it resulted in cancelled subscriptions for the magazine and hundreds of letters for Jackson. Many of these expressed bewilderment or speculation about the story’s meaning, but a good proportion were downright abusive. Jackson was surprised by the strength of this reaction, yet seems to have remained unfazed. Indeed, you can almost hear the smile in her voice as she tells Hugh Henry Jackson, literary editor of the San Francisco Chronicle: ‘The number of people who expected Mrs Hutchinson to win a Bendix washing machine at the end would amaze you’.2

While ‘The Lottery’ has been a fixture of American school curricula for decades, the rest of Jackson’s work has, until recently, been largely overlooked.3 Even her biographer, Ruth Franklin, admits that it was not until Library of America's Shirley Jackson: Novels and Stories (2010) – edited by Joyce Carol Oates – that she started reading beyond ‘The Lottery’ and The Haunting of Hill House, despite the latter having long been one of her favourite books. And critics and writers concur with Franklin’s assessment. In 1959 The New York Times Book Review rated The Haunting among the year’s Best Fiction; it was a 1960 National Book Awards finalist, alongside works by Saul Bellow, John Updike and Philip Roth; in Danse Macabre (1981),  Stephen King argues it is one of the best horror books of the twentieth century; and last year, Neil Gaiman named it the scariest book he'd ever read, ahead of  ‘The Turn of the Screw’, Salem’s Lot and The Shining.4 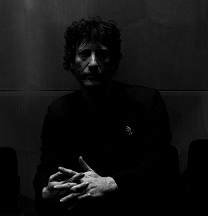 Far be it from us to spoil the plot, of course. Suffice to say that as with all great ghost stories, it is never clear whether the supernatural manifestations in The Haunting of Hill House are real, or whether they are the projections of the protagonist’s psyche. Either way, the effect is chilling and irresistible.

[3]. The recent Netflix adaptation of The Haunting of Hill House is helping to change this!

The American and British Authors of Today’s Secular ‘Traditional Christmas’

Washington Irving is today perhaps best remembered for the stories ‘Rip Van Winkle’ and ‘The Legend of Sleepy Hollow’, first published in 1819/20.  They were included in Irving’s The Sketch Book of Geoffrey Crayon, Gent, which, in its initial serialisation and then in book form, was a huge and perennial bestseller on both sides of the Atlantic.1  However, it is the Sketch Book’s five chapters depicting an English country Christmas at the Yorkshire home of a fictional Squire Bracebridge that have had the greater lasting impact.  For it was in those chapters that Irving was successful in emphasising the importance of both preserving and creating cherished Christmas traditions.

The quality of Irving’s prose reinforced his evocation of Christmas. His description of the Waits, a musical band of night watchmen, being a prime example: ‘I had scarcely got into bed when a strain of music seemed to break forth in the air just below the window.  I listened, and found it proceeded from a band which I concluded to be the Waits from some neighbouring village.  They went round the house, playing under the windows.  I drew aside the curtains to hear them more distinctly.  The moonbeams fell through the upper part of the casement; partially lighting up the antiquated apartment.  The sounds, as they receded, became more soft and aerial, and seemed to accord with the quiet and moonlight.  I listened and listened—they became more and more tender and remote, and, as they gradually died away, my head sunk upon the pillow and I fell asleep.’2 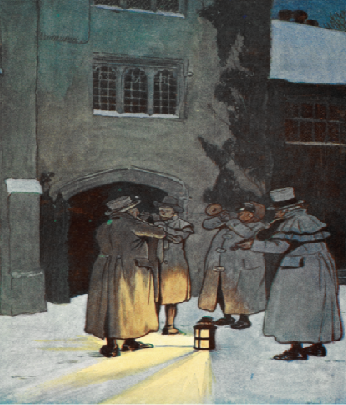 Charles Dickens was a great admirer of Irving, writing to the American, ‘I should like to travel with you, outside the last of the coaches, down to Bracebridge Hall.’  There can be no doubt that Mr Pickwick’s Christmas at Dingley Dell was inspired by Irving, as, in spirit, was ‘Christmas Festivities’ in Dickens’ Sketches by Boz.  However, Dickens gave the latter an urban setting, in London and, more narrowly than in Pickwick, centred his account on the family, thus moving it closer to today’s celebrations.  Dickens’s example encouraged the inclusion of all one’s kinfolk: ‘The Christmas family-party that we mean, is not a mere assemblage of relations, got up at a week or two’s notice, originating this year, having no family precedent in the last, and not likely to be repeated in the next.  No.  It is an annual gathering of all the accessible members of the family, young or old, rich or poor.’3 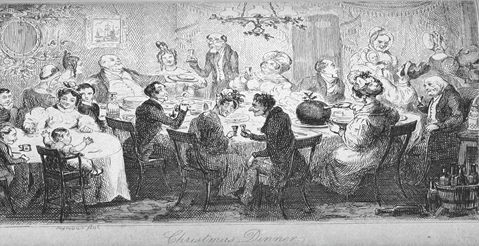 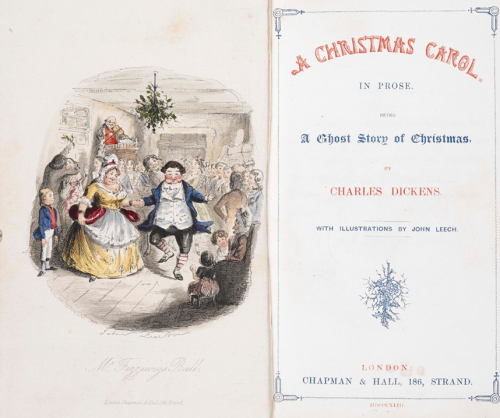 Dickens, the writer of one of the greatest Christmas stories in A Christmas Carol, was just one of a number of authors, on both sides of the Atlantic, who did so much to create lasting Christmas traditions during the half century before 1870.  And among them was a succession of imaginative Americans who, between them, produced the phenomenon that, from the end of that period, became modern Christmas’s most popular secular figure on both sides of the Atlantic.  It was then that one of the greatest of Anglo-American mergers began: with Britain’s Father Christmas keeping his name and, mostly, his robe, but for the first time assuming the colour and character of America’s Santa Claus.

Father Christmas is certainly rather older than his American cousin.  He first became the effective personification of the midwinter festival in ‘Christmas, his Masque’, written by Ben Jonson and staged for King James I & VI by Inigo Jones in 1616.  The character of ‘Christmas’, ‘Captain Christmas’, ‘Old Christmas’, ‘Christmas of London’ and Father Christmas, as he finally came to be called, was created as a satirical figure in order to mock the Puritans and their opposition to the concept of celebrating Christmas as a joyous festival.  However, Father Christmas was not a well-defined figure and so he would remain for two-and-a-half centuries. 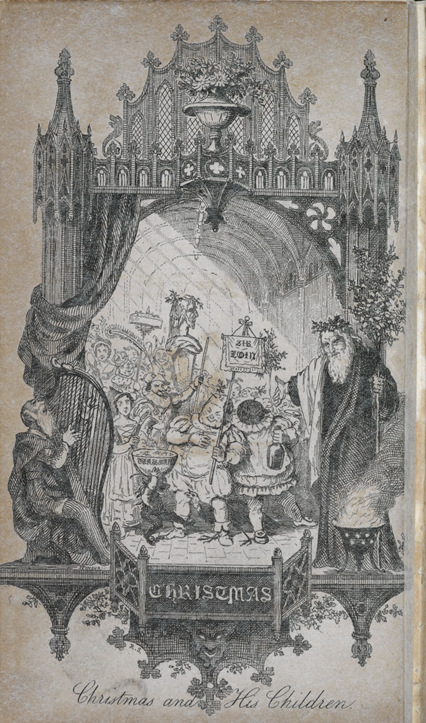 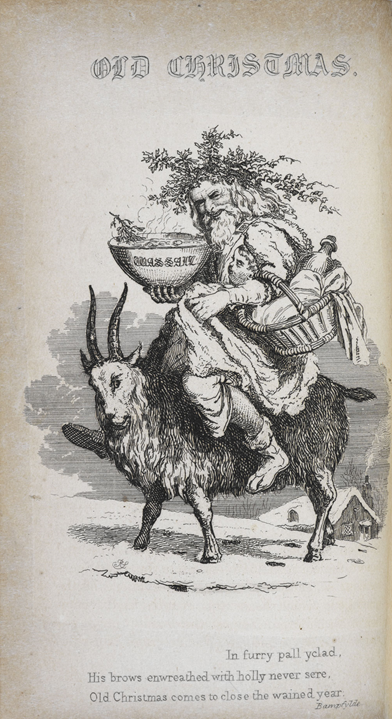 As for the origin of Santa Claus, we need once again to turn to Washington Irving and, this time, to what began as a joke.  Ten years before his Sketch Book, Irving satirised those New Yorkers who he thought over keen to create false traditions for their fast-expanding metropolis.  In A History of New York he invented a story about the very founding of the city, when the Catholic St Nicholas, known by the Dutch as Sinterklaas, flew over Manhattan ‘in that self-same wagon wherein he brings his yearly presents to children’ and directed the elders to site their settlement there.4  From this unlikely beginning, St Nicholas / Sinterklaas found favour in America.  A dozen years later, Clement Clarke Moore gave him a team of reindeer and a cheery personality in the poem best known as ‘The Night Before Christmas’ and shortly afterwards the figure became generally known as Santa Claus.  Finally, in the 1860s, the political cartoonist Thomas Nast began his creation of the physical image which, with a few minor additions, has remained to this day. 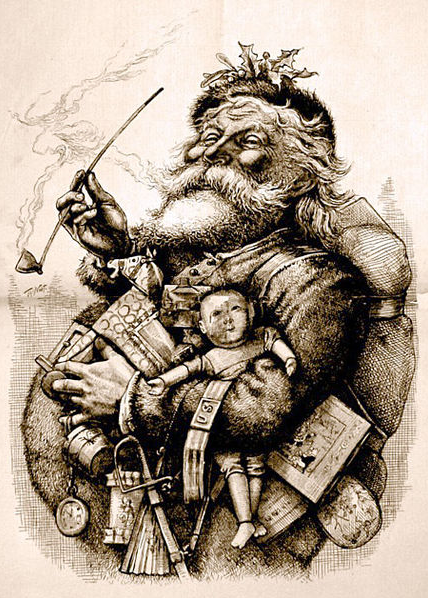 By the end of the 1860s, Santa Claus the present-giver was becoming very popular with American children and also, understandably, with the manufacturers of presents.  Improved transatlantic communications enabled Santa to skip quickly across the Atlantic.  His appeal to children was and is obvious: here was someone who brought more presents!  As for the adult British public, a change of name to Father Christmas and an assumption of hundreds of years of British heritage quickly turned this kindly American import into a seemingly timeless British figure.  Whether called Santa Claus or Father Christmas, he has become the happy personification of the modern secular Christmastime.

George Goodwin FRHistS FRSA is a Makin Fellow of the British Library’s Eccles Centre for American Studies and the author of Christmas Traditions: A Celebration of Festive Lore (British Library Publishing, £12.99).