From the collections: A Streetcar Named Desire

Thomas Lanier Williams III, perhaps better known by his pen name Tennessee Williams, passed away on 25 February 1983. I’ve turned to the Library’s collections to take a look at our holdings around one of Williams’s most popular and timeless works, A Streetcar Named Desire.

As some of our Readers may be well aware, due to conservation and preservation over the years, not all of the books held at the British Library still have their original dust jackets, covers or bindings. So it’s always a joy to call up an item from the basements which still retains its original frontage in full, glorious technicolour. 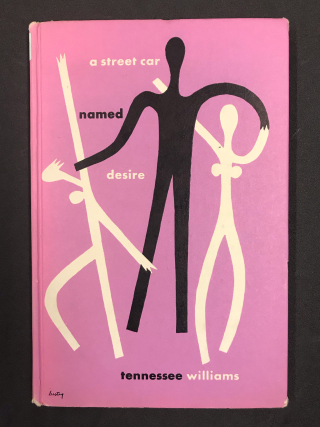 I discovered that we’re fortunate enough to hold a first edition of A Streetcar Named Desire (YA.1996.b.5800) published by New Directions in 1947, complete with the lavender pink cover design by Alvin Lustig. Showing three figures entwined, almost dancing, on the front, the image is a striking one among, what can be, shelves of dark spines. An imposing male stands in the centre, in a puppeteer-like poise, commanding two females either side of him: seemingly a picture of the tempestuous and forceful Stanley Kowalski, with his wife, the meek Stella, on one side, and his struggling sister-in-law, Blanche, on the other.

New Directions Books were published by American poet, James Laughlin, who started the publishing house after seeking career advice from none other than Ezra Pound. “He had been seeing my poems for months and had ruled them hopeless. He urged me to finish Harvard and then do ‘something’ useful.” Laughlin recalls. Bestsellers from New Directions, an imprint largely devoted to Modernist writers, include works by Lawrence Ferlinghetti (A Coney Island of the Mind, EMC.2011.a.174), William Carlos Williams (Selected Poems, 75/17337) and Ezra Pound himself (The Cantos, W55/3062). Of Tennessee Williams, the New Directions website states:

‘As well as being astonishingly talented and prolific, Tennessee Williams was a man of considerable personal courage, willing to be open about being a gay man at a time when few were. Tennessee Williams is a cornerstone of New Directions, as we publish everything he wrote in his storied career. He is also our single bestselling author.’

Many of the early New Directions covers feature artwork by Denver-born designer, Alvin Lustig (1915 – 1955). A rigorous graphic designer who forayed into architecture, interior and industrial design, ‘Lustig’s opportunity to use the book cover as a vehicle of bold graphic experimentation and innovation was provided by James Laughlin…a collaboration that flourished throughout the 1940s until Lustig’s early death in 1955… [they] prodded, cajoled, and quibbled their way through a virtually unprecedented partnership…’. (page 7, Purity of Aim: The Book Jacket Designs of Alvin Lustig by Ned Drew and Paul Sternberger, YC.2017.a.13503) In each other they recognised ‘a sense of uncompromising principles and a tenacious drive to make a mark on contemporary society’ (page 13, ibid). 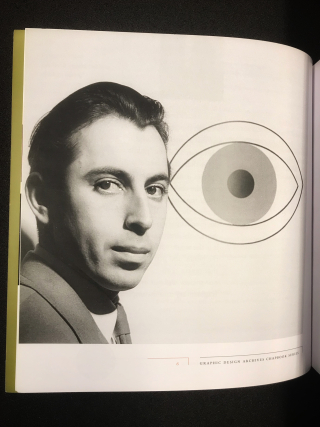 Black and white photographic portrait of Alvin Lustig, with one of his ‘eye’ designs used on New Directions covers (image from YC.2017.a.13503)

Laughlin’s publication choices together with Lustig’s eye for colour, graphic systems and bold juxtapositions, resulted in sure-fire ways to stop readers in their tracks in the mid-20th century, beckoning them, as the names implies, to traverse New Directions. And it worked; ‘Lustig’s jackets had a quantifiable impact on the book-buying public; they enormously increased the sales…’ (page 49, Born Modern: the Life and Work of Alvin Lustig by Steven Heller and Elaine Lustig Cohen, LC.31.b.7733). Laughlin confirmed that Lustig’s artwork and ‘beautiful designs…help[ed] to make a mass audience aware of high quality reading’ (James Laughlin, “The Book Jackets of Alvin Lustig”, Print, Oct/Nov 1956, as quoted on page 50 in Born Modern by Heller and Lustig Cohen, LC.31.b.7733). Though one should never judge a book by its cover, it’s easy to see the appeal of these designs in a shopfront even today. This is something Laughlin acknowledged also: ‘People should buy books for their literary merit. But since I have never published a book which I didn’t consider a serious literary work – and never intend to – I have had no bad conscience about using Lustig to increase sales.’ (ibid)

Examples of Lustig’s work for New Directions (images from LC.31.b.7733)

Beholding a green Library stamp, signifying a donation, my interest was also piqued at seeing two handwritten inscriptions signed ‘Sidney Lanfield’ on the inside cover of this edition. Lanfield was an American director (1898 – 1972) whose work included the 1941 film You'll Never Get Rich starring Fred Astaire and Rita Hayworth. As beautiful as this book is, the director’s signature serves as a reminder that A Streetcar Named Desire is in its most perfect form when performed on stage, as was its intention. 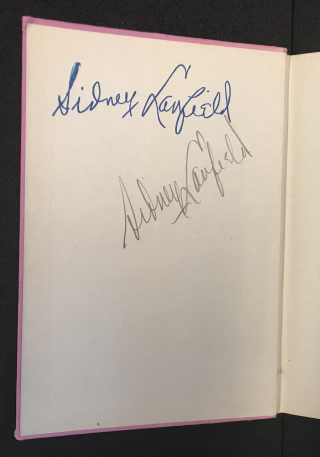 And what better illustration is there of this than the original playbill for the Ethel Barrymore Theatre where Streetcar was first performed? This programme (RB.23.b.7714) for the original Broadway production of the play is from 9 February 1948; the play premiered at the theatre just two months earlier on 3 December 1947. The Pulitzer-Prize winning drama, directed by Elia Kazan, still featured the original stars including Marlon Brando, Kim Hunter and Jessica Tandy. The New Directions edition of the book also lists the star-studded cast that were part of the premier run of the production. As well as giving early portfolios for the cast in lead roles, the playbill is dispersed with advertisements, including plenty for cigarettes (Camel) and alcohol (Carstairs whiskey), and is a great primary resource for researchers. Others may also interested in reading The New Yorker’s Wolcott Gibbs’s slightly scathing, and controversial, review of an early performance of this production from 6 December 1947: an article that closes with ‘I’m sorry to say there isn’t much room left for the compliments’. 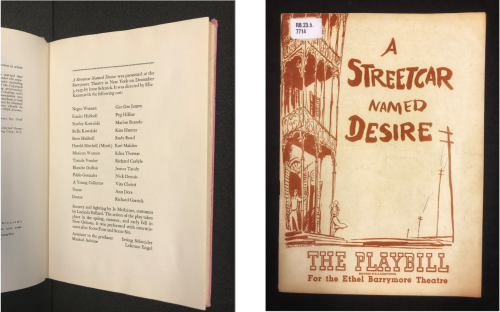 73 years on from the New Directions publication of the play, and its premiere performance, and 37 years since Williams’s passing, it’s incredible to see A Streetcar Named Desire in its initial guises. A reminder that the British Library has endless avenues to pursue when it comes to fresh research around even the most seemingly well-established of subject matter.