The Library’s collections are rich in Beats and Ferlinghetti material (take a look at our Beats bibliography if you’re interested to see a comprehensive overview of holdings). But with so many pages of ground-breaking content to leaf through, what would be appropriate to feature to mark the artist’s 101st birthday? 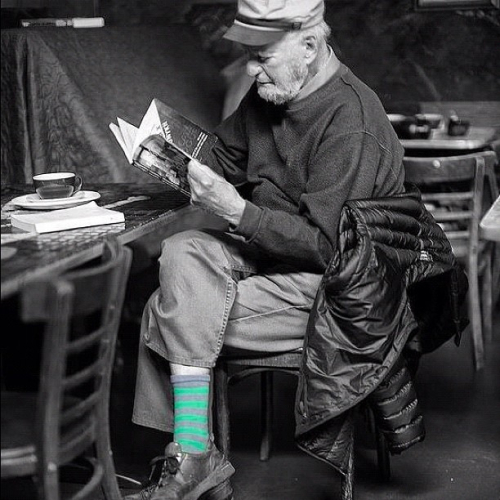 Pictures of the Gone World seemed like a good option (fifth printing edition held at BL shelfmark 011313.t.3/1.). This was Ferlinghetti's first book, published in 1955 by his own City Lights Books, in a 500-copy letterpress edition (City Lights Booksellers & Publishers website). Two years earlier, he had co-founded City Lights Bookstore in San Francisco together with college professor and editor of City Lights magazine, Peter D. Martin. The store was the first all-paperback bookshop in the United States (The Guardian online, Interview with a Bookstore: San Francisco's historic City Lights) and would become ‘the launching pad for the San Francisco Writers Renaissance’ (Douglas Street in the Southwest Review, Vol. 66, No. 2 [Spring 1981], p. 228. Access via JSTOR, available in British Library Reading Rooms). For more than 60 years, City Lights “has served as a ‘literary meeting place’ for writers, readers, artists, and intellectuals to explore books and ideas.” (City Lights Booksellers & Publishers website). 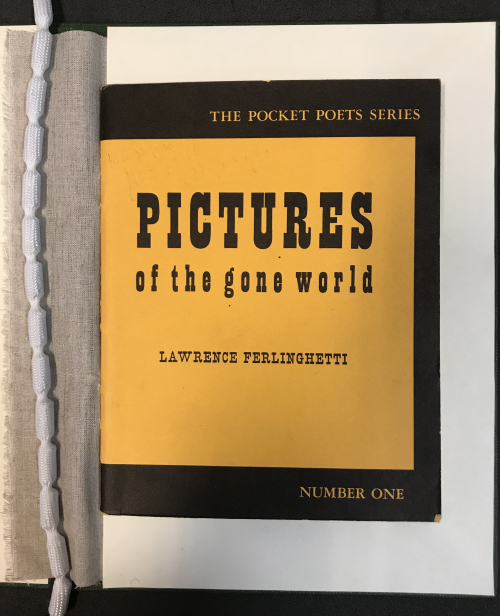 Pictures of the Gone World was Number One in the Pocket Poets Series launched by the City Lights Books. One of the series focuses was to provide paperback, and thus more affordable, content to readers, and the book’s publication helped to extend Ferlinghetti’s ‘concept of a cultural meeting place to a larger arena.’ (City Lights Booksellers & Publishers website). With mentions of London, Paris and the harbour of San Francisco in the poems’ titles, the collection not only documented Ferlinghetti’s artistic development but also acted as a kind of ‘travel journal of the place in which he had lived’ and visited (Ferlinghetti: A Biography by Neeli Cherkovski, page 82), taking readers around the world as they dipped in and out of his work, while the small design allowed for them to carry Ferlinghetti around with them on their own travels.

The Pocket Poets series went on to include several Beat classics including Allen Ginsberg’s Howl and other poems (1959 edition held at BL shelfmark 011313.t.3/4) – Number Four in the series – which was published in October 1956 and met with immediate, if controversial, success. The landmark poem’s concept, together with Ginsberg’s powerful delivery at group readings, made it ‘a crucible of cultural change. Except for the response to Dylan Thomas’ readings in America, never before had a modern audience reacted so passionately, or identified so completely with a poet’s message.’ (Naked Angels: The Lives & Literature of the Beat Generation by John Tytell, page 104). You can read more about the reaction to, and impact of, Howl in our blog from 2013. Other early items in the Pocket Poets series included William Carlos Williams’s Kora in Hell: Improvisations, Marie Ponsot’s True Minds and Poems of Humor & Protest by Kenneth Patchen. 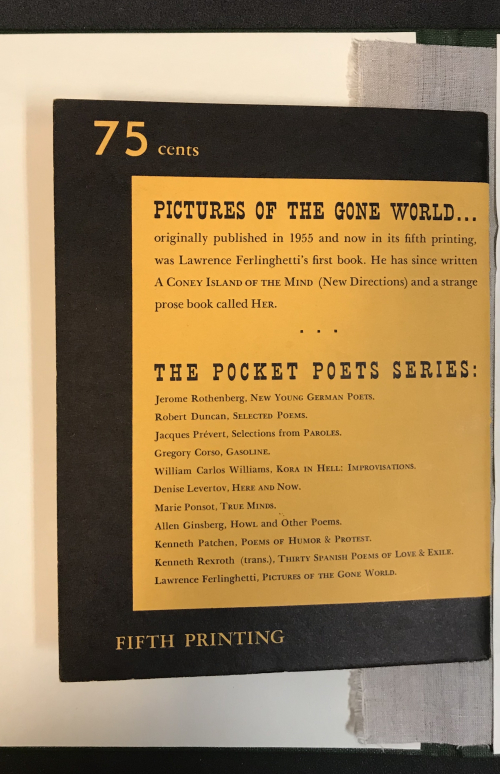 The little paperback held by the British Library features the unassuming, yet at the same time, striking black and yellow cover – the style of which would be replicated through the Pocket Poets series and at just 75 cents a pop, whose simplicity made it something that could be available to many. As the series’ name implies, the collection ‘can be carried in a pocket, and read in less than an hour.’ (Beat Poetry by Larry Beckett, page 17)

Between the pages readers are greeted with some of Ferlinghetti’s most memorable works including ‘The world is a beautiful place’ – a melancholy and ironic ode to one’s bittersweet existence on earth. In Ferlinghetti’s style, readers are ping-ponged across the page, yo-yoing between scenes of beauty and happiness, ‘smelling flowers’ and ‘swimming in rivers’, then thrown into despair: ‘if you don’t mind a touch of hell’ and ‘some people dying all the time’. Swayed back and forth, the reader is constantly reminded of being destabilised each time something comforting is mentioned: ‘The design… reflect[ing] Ferlinghetti’s continuing concern with the way the poem looked on the page… [he] was satisfied that the arrangement of the words enhanced the meaning of the poem.’ (Ferlinghetti: A Biography by Neeli Cherkovski, page 82)

Many of the poems in this collection are said to ‘reveal…the quiet struggle of ordinary people. The unusual distribution of lines on the page, and the inventiveness with word play and rhyme, show Ferlinghetti’s sense of freedom, itself a key notion in his work.’ (Beat Culture: Lifestyles, Icons, and Impact edited by William T. Lawlor, page 106)

‘The world is a beautiful place’ can certainly be seen to exemplify such a statement. 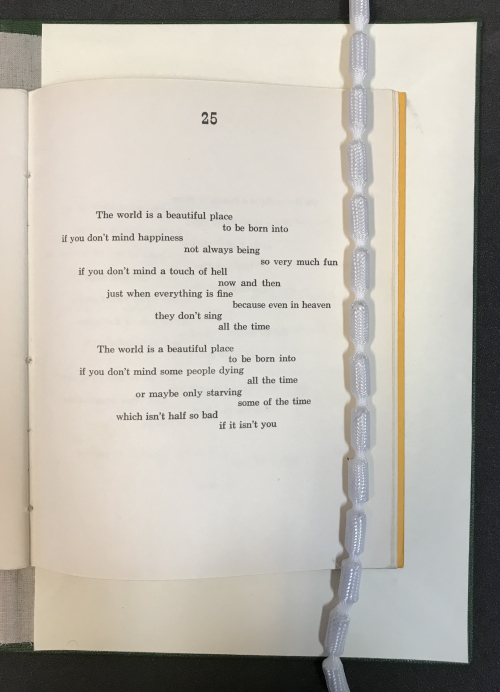 The world is a beautiful place…to be born into… if you don’t mind happiness…not always being…so very much fun (BL shelfmark 011313.t.3/1.)

Despite being written in the mid-20th-century, this timeless poem doesn’t feel out of place when read in 2020. It’s a testament to Ferlinghetti’s skill and intuition; to be able to tap into subject matter and raise questions that feel as relevant today as when he first wrote them some 65 years ago.

The British Library holds a number of items from City Lights Books Pocket Poets Series and publications from Ferlinghetti, including first editions, some inscribed by the poet himself. Below is a selection of suggested reading. Follow the link to our Beats Bibliography for a more complete overview of Library printed holdings on the subject.

The Guardian, San Francisco's City Lights: the bookshop that brought us the Beats (accessed 16 March 2020)

Who are we now? by Lawrence Ferlinghetti (New York: New Directions, 1976) shelfmark YA.2002.a.19832. Note: Signed and inscribed by Ferlinghetti.