All Cooped Up: Notes from the Arctic 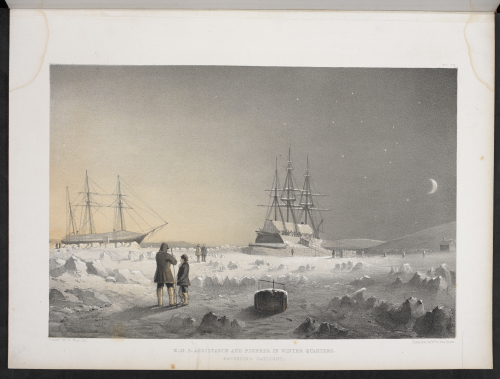 Above: 'HMS Assistance and Pioneer in Winter Quarters', from A Series of Fourteen Sketches Made during a Voyage up Wellington Channel [BL1781.a.23]

It feels like it has been years since I wrote something for the Americas blog (actually, I think it has been) but recent days have got me thinking about old research and getting back to writing. Unfortunately, this is because I’ve spent the last two weeks pretty much staring out the same window. I’ve been holed up in bed getting over what seems to have been a bout of Coronavirus. I have been fortunate in terms of how hard it has hit and I’m lucky to be on the mend now. So, this turned my mind to getting better physically and getting active mentally, which reminded me about my work on the search for the Northwest Passage.[i]

Why? Well, for many Europeans and Americans who visited the North American Arctic in the nineteenth century overwintering was part and parcel of the expedition. Sometimes this was deliberate, in the case of multi-year voyages of exploration, and sometimes it was accidental, for unfortunate crews that had bad luck or worse plans. For every expedition that spent the winter in the Arctic one thing was essential, keeping mind and body active in often confined and restrictive conditions. I think you can see where this is going.

Winter in the Arctic was a time when expeditions could get important survey and exploration work done but for most, spending winter in the Arctic was about one thing: waiting out the dark, cold months so the sun would return, the ice might melt and activity could resume again. These sailors, then, were isolated, alone together and with limited space in which to do all they needed in order to thrive. Yet, many crews successfully navigated these winter months and, not only that, came to summer feeling fit and enthusiastic for the back-breaking work ahead. Which leads me to wonder, what did these crews in the Arctic do to thrive in the winter months of isolation and can we learn anything from them? Here are the best and, sometimes, simplest things captains and crews did to make the most of the winter:

First off, the absolute fundamental. It was easy for discipline to break down in the early months of winter, especially in crews who were not expecting to be stuck in the Arctic, and one of the first signs of trouble was the crew refusing to dress and clean. In the winter of 1897, the crews of eight American whaling vessels were trapped in ice off Point Barrow when winter came early. Later, when a crew from the US Revenue Cutter Bear reached them it became immediately clear that discipline had broken down as no one had cleaned or changed their clothes for months.[ii] As a result, the first thing the commander of the relief expedition did to rebuild morale was to order everyone to wash and change their clothes on a regular basis. Which probably means I should transition out of sweatpants at some point. 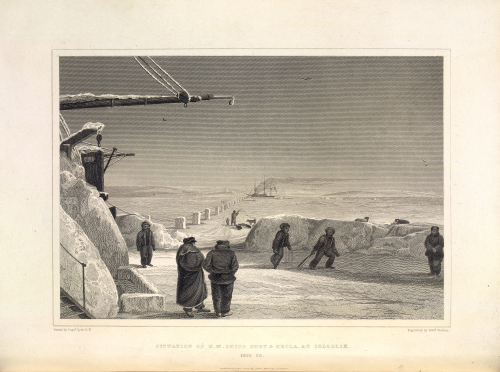 Above: a game of Arctic cricket. From, Journal of a second voyage of discovery for a North-West Passage [BL G.7394]

Almost all Navy expeditions to the Arctic recognised the importance of exercise during the winter months. However, not everyone had the luxury of the space and conditions that allowed Capt. Parry’s crews to organise games of cricket on the Arctic ice, as pictured. For those stuck on their ship, focus turned to things like tests of strength, indoor athletic competitions and so on. All of which means that running a marathon on your balcony probably isn’t a new phenomenon.

Stretching your mind was crucial during the winter months. When Sir John Franklin’s ill-fated expedition departed for the Arctic, it took equipment for evening schools in the winter months. On top of the exercise books, work slates and other materials, each of Franklin’s ships carried a library of 1,200 publications ranging from magazines to best-selling novels, to technical manuals.[iii] So if you’re starting a new book or learning a new language right now then you are following in the footsteps of many Arctic over-winterers before you. 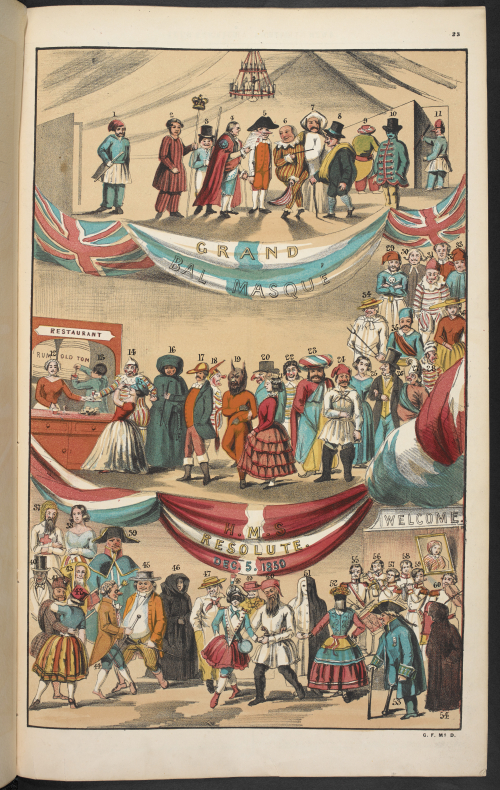 Crews bound for the Arctic also frequently took instruments with them and during the winter months these could form an integral part of the plays, balls and farces organised on ship. These entertainments, such as the ‘Grand Bal Masque’ shown here in the Illustrated Arctic News were an important way of relaxing discipline and, most importantly, blowing off steam.[iv]

Finally, writing. Capt. Parry’s first command in the Arctic, 1819, saw his crew stuck in the ice for months and overwintering in the Arctic. Science Officer Edward Sabine decided the crew should write and print a newspaper on board ship, giving rise to the North Georgia Gazette and Winter Chronicle.[v] Sabine’s idea was so successful it was replicated on many later expeditions, including that of the Resolute (see The Illustrated Arctic News, above) and subsequent Antarctic expeditions under Scott and Shackleton.

These five ways of getting through the Arctic winter may even help in the coming months. I plan on trying them all out as soon as I can, although exercise may have to wait a while. However you approach it, take care and stay well.

[ii] Report of the Cruise of the U.S. Revenue Cutter “Bear” and the overland expedition for the relief of whalers in the Arctic Ocean, from November 27, 1897, to September 13, 1898. [With maps and illustrations.], Washington, 1899 [BL General Reference Collection A.S.538]

[iv] Facsimile of the Illustrated Arctic News  published on board H.M.S. Resolute: Captn. Horatio T. Austin, in search of the expedition under Sir John Franklin. Published in London on 15 March 1852 [BL 1875.c.19]