Bernard and Mary Berenson at Villa I Tatti

On the first days of the lockdown, while making peace with the idea of being forced home by an enemy I couldn’t even see, confined in my cosy flat, and comforted by the pleasure of reading, I started leafing through my art books. I recalled those days, whose exquisiteness I was never enough aware at the time, when I had to lock myself in my room to prepare for my art history exams, back in the good old days of literary leisure as a university student. 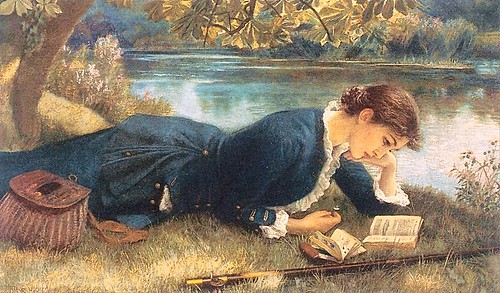 How I reimagine myself back in the good old days of literary leisure as university student. The Compleat Angler, Arthur Hugughes (1832-1915) Photo sourced by flickr uploaded by Amber Tree ©All rights reserved.

Among the very strict iconographic parameters, and names, and dates, and gallery details to be remembered by heart, there were those curious anecdotes that pleasantly livened up the monotony of the study routine. Today, I have certainly lost the pedantry of remembering the details but the anecdotes, I surely remember those, and so I recalled the story of Bernard and Mary Berenson.

I remember the story of how Bernard had been inspired to read more extensively the books of his library due to the confinement of a long period of isolation in his house, Villa I Tatti in Florence, and the story of his wife Mary. Ghost writer, art historian, suffragette, feminist and poet, and member of the Bloomsbury Group, together with her daughter Karin Stephen who had married Virginia Woolf’s brother, the story of Mary Berenson, has always fascinated me. 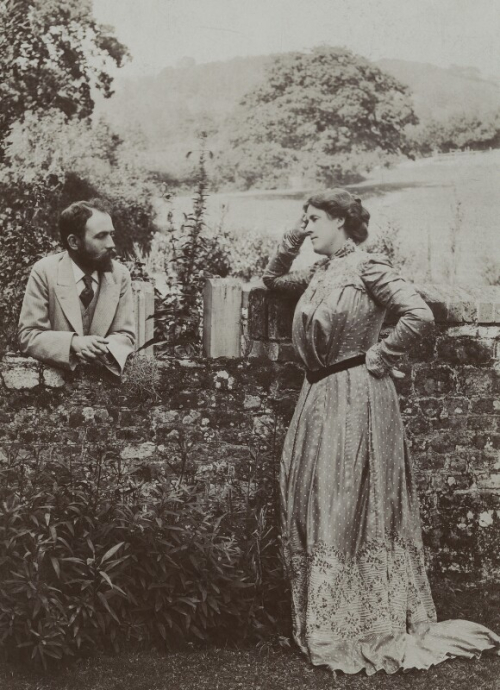 Born Mary Withall Smith, from a couple of Quaker preachers from Pennsylvania, she was an art historian, and has been reassessed as an important author in her own right rather simply a ghost writer.

In 1885, after marrying the Scots-Irish barrister and political reformer, Frank Costelloe, Mary moved to England. Together with her parents, who had moved with her, she became very much involved in the social and intellectual life of the country, often hosting poets and philosophers such as Walt Whitman, with whom Mary was connected through mutual feelings of friendship and esteem for life1. 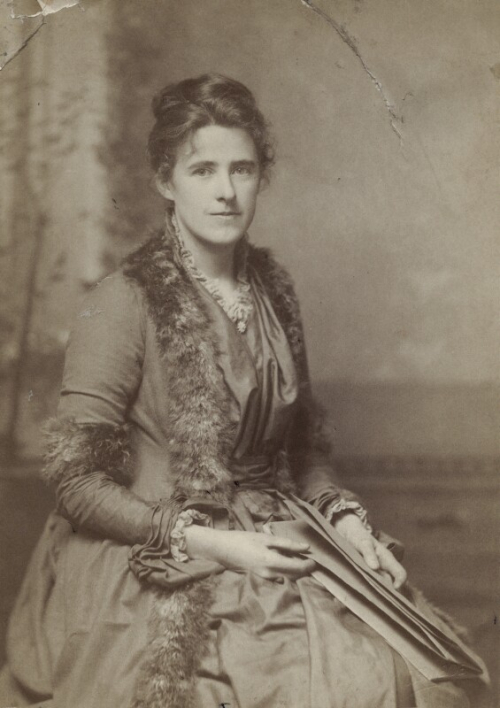 Mary had studied at the Harvard Annex, later Radcliffe College, a women’s liberal arts college and female counterpart to Harvard College, very well known for being the host of the late 19th century intellectual, art-inspired, and independent-minded female students2. Her personal inclination towards the arts, politics and culture were clearly stimulated in the Harvard intellectual environment. Supported by her feminist mother, Mary became involved in the women's movements in the United States and later in England, publishing articles and making speeches on feminism, suffrage and women in politics. 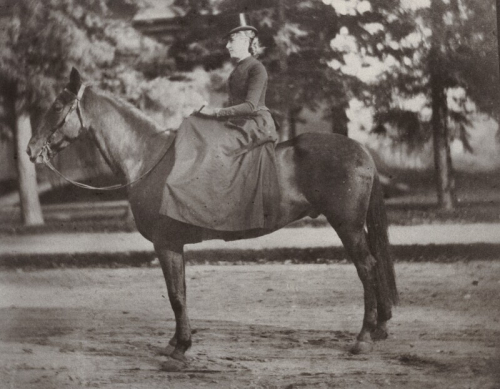 Not long after the marriage, probably displeased with it, and feeling constrained by the weight of the social convention, she abandoned the life of a devoted spouse and loving mother to return to her latent interests in art and design, and pursue a career in the arts. Focusing on art research, Mary rapidly became an art authority with a prolific output of journal articles, and particularly after the publication of a pamphlet, in 1894, on the history of the Italian paintings at Hampton Court, a work strongly influenced by the presence in her life of her mentor Bernard Berenson, whom she met in 18903.

The common passion for the Italian Renaissance art, and the several journeys to the continent and in particular to Italy, where Mary studied art under Bernard’s tutorage, made the couple fall in love with each other. By that time, Mary was energetically committed to work on Bernard’s projects and his public image, contributing to his essays, and writing reviews promoting his publications, and eventually moving to Florence to Bernard’s estate Villa I Tatti.

“… she played a major role in the writing of the Venetian Painters of The Renaissance, which listed Bernard as the sole author due to the social delicacy of their association … she published less as she devoted more of her energy to supporting Bernard's work (Mary Berenson)”4.

With such an established and undisputed calibre of art scholarship, it will not be difficult to imagine how the role of Mary in Bernard's works has been widely re-evaluated in the latest years. It appears now, that her hand in Bernard’s writing production and fame, is unquestionable. 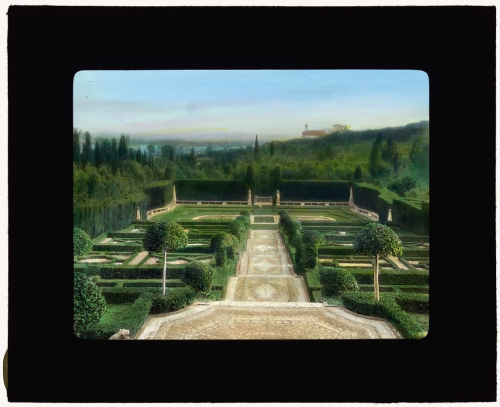 During WWII, Bernard Berenson, a Jewish American, and one of the most influential art critics of his time, was forced to live as refugee in his own house, Villa I Tatti, a beautiful countryside estate in Settignano, Florence, for around one year.

“With the war upon him, B. B. faced a terrifying future. In time of crisis some people go to church, some take to drink, others simply run away. B. B. turned to his library … His library is his fortress and is filled with the smoke of the battle raging outside"*.

In 1942, confined to an indefinite period of isolation when it was not safe to be a Jewish-American living in the Italian peninsula, protected by the American ambassador in Italy and by the people of the town, he challenged himself to a more extensive reading of his library, believing this would help him to stop from thinking too much about the war and all its consequences. 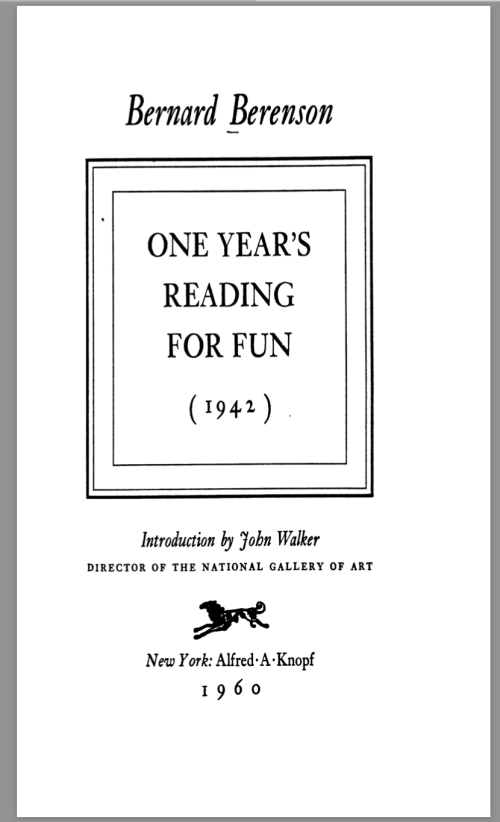 In 1959, when the University of Harvard inherited the Berensons’ library, the whole nucleus consisted of more than 50,000 volumes, a collection of works mainly about Mediterranean art and culture, but including also a rich collection of works on Oriental art and archaeology, and of around 170,000 photographs. Mary and Bernard had put together this treasure in Villa I Tatti from 1907 onwards, when the estate was purchased, probably starting from combining their own private collections. In addition to a room which served as a proper library space, the collections had grown rapidly and consistently so that other eleven rooms were added to the main space in the following years. 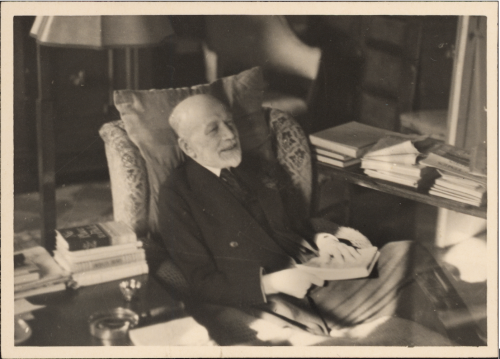 Bernard Berenson in his study at I Tatti. Unknown photographer, winter 1948-1949. Courtesy of the President and Fellows of Harvard College. Biblioteca Berenson, I Tatti -The Harvard University Center for Italian Renaissance Studies, Bernard and Mary Berenson papers, Photographs. Hollis No. olvwork631213

Berenson collated the notes from his reading of his library in a work that was posthumously published in New York in 1960 by Arnold A. Kpnof, and edited by John Walker, director of the National Gallery of Art and Berenson’s pupil.

And you? What about your quarantine reading? What lively quotations have you come across?

3 Logan, Mary, Guide to the Italian Pictures at Hampton Court: with Short Studies of the Artists (The Kyrle Pamphlets; no. 2), London, 1894 (shelfmark: 07813.aa.7.). Mary Berenson wrote the pamphlet under the pseudonym of Mary Logan.

4 In 1984, the publication of Venetian Painters of The Renaissance, established Bernard Berenson’s reputation as an art historian of undisputed international fame, a book largely written by Mary. Check the British Library copy The Venetian painters of the Renaissance, with an index to their works, New York and London: G. P. Putnam's Sons [third edition], (shelfmark: 7858.r.37.). On the case of Mary’s role in Bernard’s publications see: Barbara Strachey and Samuels Jayne, Mary Berenson: a self-portrait from her letters & diaries, London: Hamilton, 1985 (shelfmark: X.958/31629).

Posted by Annalisa Ricciardi at 9:49 AM