Poems from the edge of extinction (part 1)

For this blog, and in collaboration with our European Studies colleagues, we have taken inspiration from last year’s timely anthology of poems, Poems from the Edge of Extinction, edited by poet and UK National Poetry Librarian, Chris McCabe. Published in 2019 (also the UN’s International Year of Indigenous Languages), the book celebrates linguistic diversity through poetic expression, gathering 50 poems in languages identified as endangered and presenting them in both the original and in English translation. It’s got us thinking about poetry written in lesser-known languages in the Americas and Oceania collections. In part 1 of this blog, we consider examples of poetry in Tongan and Yucatec Maya, while part 2 (to follow) will look at examples in Patwa/Jamaican creole and Yolngu Matha. If you've never heard of these languages, read on!

Tongan (Lea Faka-Tonga) is the national language of the Kingdom of Tonga, a Polynesian nation of 169 islands in the southern Pacific Ocean, and the only monarchy in the Pacific. Tongan is a Polynesian language of the Austronesian family and is most closely related to the Samoan language of the same family. There are around 190,000 Tongan speakers with nearly half of these living overseas in Aotearoa/New Zealand, Australia or the United States. Though not on the endangered language list, Tongan, like many Pacific languages, is in danger of an eventual language shift to English. As outlined above, the migration of many native Tongan speakers is a predictor for this, as well as the predominance of English in online environments, and with English being increasingly associated with greater educational and employment opportunities.  In an effort to counter this and preserve Tongan as the native language among young people in the country, the Minister of Education introduced a new language policy in 2012. Children are now taught solely in Tongan upon starting school, with English only gradually introduced at later stages. The policy aims for students to be fluent in both languages by completion of their education. Other efforts to preserve the language and culture among Tongans, includes the annual Tongan Language Week for Tongans living overseas in Aotearoa/New Zealand.

Traditionally a spoken language, the first written examples of Tongan were made by missionaries using the Latin script in the 19th century, with the current spellings decided by the Privy Council of Tonga in 1943. The Tongan script uses three different diacritic marks to guide pronunciation and meaning: the glottal stop, the macron, and the stress mark, which often requires careful proofreading in text. The language is notable for having multiple speech registers based on status and formality, including one specifically for use when speaking to or about the reigning monarch or deities. With its strong oral over written tradition, Tongan language poetry is not abundant in our print collections. However, I would like to take this opportunity to highlight a translated collection of the poetry of Tonga’s longest reigning monarch, Queen Sālote Tupou III, Tonga's poet on the throne from 1918 to her death in 1965. Songs & poems of Queen Sālote (2004) features 114 works by the monarch in Tongan with translations into English by the Pacific languages academic, Dr. Melenaite Taumoefolau. 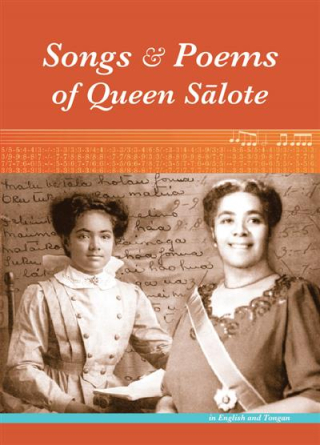 Some of you may already be familiar with Queen Sālote as the head of state who received uproarious applause on Queen Elizabeth II’s Coronation Day in 1953, when she refused to lower the hood of her carriage in the driving rain, and instead laughed and waved joyfully at the crowds lining the procession route. Her spirit and warmth on the day prompted newspaper editor, Jack Fishman, to write a song aptly titled The Queen of Tonga (Music Collections VOC/1953/FISHMAN) which was then made popular by Edmundo Ros and his orchestra (Sound Collections 1CD0189529). 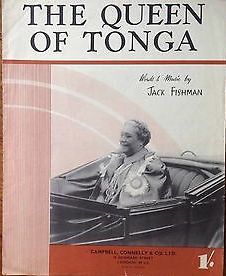 However, you may not know that she is also celebrated as poet and song writer whose work, comprising of over 100 compositions, has played a major role in the preservation of the Tongan language and Tonga’s rich cultural heritage. Historian and biographer of Queen Sālote, Elizabeth Wood-Ellem, wrote in Songs & poems of Queen Sālote that:

The Queen was… acclaimed as an extremely gifted poet. Queen Sālote spent many hours perfecting the words of her poems, and she invited groups of musicians to come to the Palace in the evenings to work with her. They often stayed until the early hours of the morning. Poetry that was set to music consisted of love songs (both happy and sad), laments for deaths of chiefs and those close to her, lullabies for her grandchildren, and songs written especially for the accompaniment of dance, such as lakalaka and mā‘ulu‘ulu. Love songs (hiva kakala) were often used as accompaniment to the solo dance for a woman, the tau‘olunga. (pp.279-281)

Tongan language poetry makes great use of heliaki (metaphoric language) to make culture specific references to the knowledge shared by Tongan speakers. This can make literal translations difficult without using annotations, as the meanings and connotations of kinship connections in the heliaki often require explanation to non-Tongan speakers. We can see an example of this in Queen Sālote’s poem, The Queen’s Tears at the Passing of Tangata o’ Ha’amea, which employs the technique to bemoan that Ha’amea (a prominent Tongan chief) left no heir:

Diplomatic use of heliaki can be seen in her poem, ‘Uno 'o Sangone. Composed during World War 2, the poem is ostensibly about the Polynesian myth of the turtle Sangone, but draws heavily on the shared knowledge of the long history and connections between Tonga and its neighbour, Samoa. Through this use of heliaki, the Queen aimed to reassure Tongans and remind them of the importance of allies and unity during wartime:

No wonder the gales blew from the south
Lightening flashed from the west.
The Feingakotone* thundered
For Sangone’s shell was brought forth. 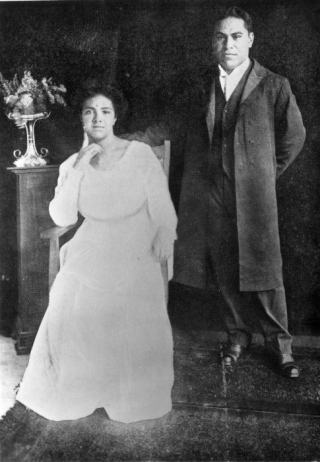 However, to really appreciate the Tongan language and Queen Sālote’s work, you should enjoy it in the manner through which it was intended, such as this contemporary performance of Loka Siliva (Silver Lock or Locket), a love song (hiva kakala) she wrote for her husband, sung by the Tonga Creative Collective, and with translations from Tongan to English.

*Feingakotone is a place in the Kingdom of Tonga 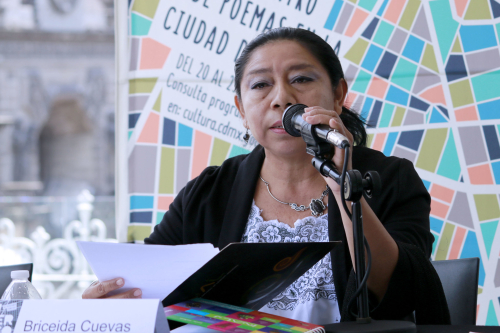 Briceida Cuevas Cob is a well-published poet and cultural promoter in her native Yucatan, South-Mexico. The poem below is from the verse collection U yok’ol auat pek’ ti kuxtal pek’ / El quejido del perro en su existencia [The growl of the dog in its existence]. In her collection, she captures the violence and harshness of Mayan existence through the violence suffered by these abandoned stray dogs.

Four poems from this collection were published in Latin American Literature Today, May 2018: Translated by Arthur Dixon. Here is one of them:

Who is he who holds out the stale tortilla with his left hand
and then
raises his right hand to strike?

Dog, don’t you abandon your owner,
dog, don’t you bite your lord,
dog, you love your master:
lend your tongue to the man,
so the drool drips down him too,
so it wets the earth,
and sows, like you, the understanding of existence.
Lend your eyes to the man,
so he sees with your sadness.
Lend your tail to the man,
so he wags it with joy
when they call him: KS, KS, KS;
so he tucks it between his legs with your shame
when they tell him: B’J, B’J, B’J;
lend him your nose
so he sniffs the goodness that only exists in the hands of a child.
Lastly,
lend him your teeth
so he bites his own conscience.

I have chosen this poem, because I remember stray dogs as a striking feature during my first visit to Mexico as an intern at UNFPA (United Nations Population Fund) after finishing my MA. An older Austrian colleague with a proper job adopted a stray dog, when a group of us came home from a weekend trip. Looking back, this must have seemed a foolish act to many local people. Yet, we were a group of young and idealistic Mexicans and foreigners and this act of kindness towards the stray dog is stuck in my mind.

When I read Briceida Cuevas Cob’s dog poems, I think back to the many mangy dogs on dusty roads I saw in Mexico and our friend’s little act of defiance in taking one of them in. I like how Cueva Cob in her poem binds together mundane experiences of ubiquitous violence with deep philosophical questions about life. And I like the rhythm of the poem in the English translation by Arthur Dixon. In the Maya original, which I cannot read, I enjoy looking at the distribution of letters on the page, strange and beautiful to me, unlike the spelling of any other language I can read. There are so many ‘k’ and ‘u’. It looks mysterious to me and makes me want to hear the poem recited in Yucatec Maya.

If you feel the same, you can hear another poem by Cuevas Cob set to music by contemporary Mexican composer Hilda Paredes, who lives in London. Our library has the music score of two pieces composed to Cuevas Cob’s work.  One is called Codex of Enigmas/ Códice de Adivinancas [Scores at BL Music Collections g.1465.v.(2.)] and is a piece for solo viola and a speaker reciting the poem written in Maya language . You can find a video of a performance in France on the composer’s webpage.

Or if you prefer a different tune, check out the video from Tihorappers Crew, from Tihosuco, Quintana Roo (also in the Yucatec peninsula). It starts in Maya language and then switches between Spanish and Maya. Even if you don’t know Spanish or Maya, I think you’ll be able to hear the difference between the two languages and can enjoy the beat.