Do you know this man? – His name is Andrés Bello and he was one of the most influential thinkers and makers of post-independence South-American nation building. Bello was born in Caracas in 1781 into the Spanish empire and, in his twenties, enjoyed a short career in the colonial administration, before the struggle for independence across his continent made him a life-long exile. In 1810, Andrés Bello joined the diplomatic mission of the continent’s foremost military leader Simón Bolívar in an effort to trump up political and financial support from the British government. Little did he know that the events unfolding back home would leave him stranded in London for what turned out to be almost 20 formative years from his late twenties to his late forties.

The long fight for independence meant that diplomatic funds quickly ran dry and Bello had to find other ways to make ends meet as a private tutor and translator. Sometimes better-off intellectual friends lent him a helping hand: the Scottish philosopher James Mill, best known today as the father of his more famous son James Stuart Mill and as collaborating with the founder of utilitarianism Jeremy Bentham, was able to pay Bello for his help in transcribing some of Bentham’s manuscripts (Weinberg 1993/2000: 3). In these times of economic hardship, the British Museum Library, predecessor of the British Library, became his refuge and undoubtedly also a meeting place with other like-minded intellectuals. This was not yet the grand round reading room the outline of which is still visible today in the circular structure in the atrium of the British Museum, but the older, more intimate reading rooms of the previous building at Montague Square.

And no matter how dire his life and the prospects of ever returning home, Bello found solace in his work at the British Museum Library, painstakingly transcribing the fruits of his labour into his London Note Books, which were published in a critical edition in 2017 fittingly bearing a contemporary picture of the reading room Bello would have visited on its front cover. 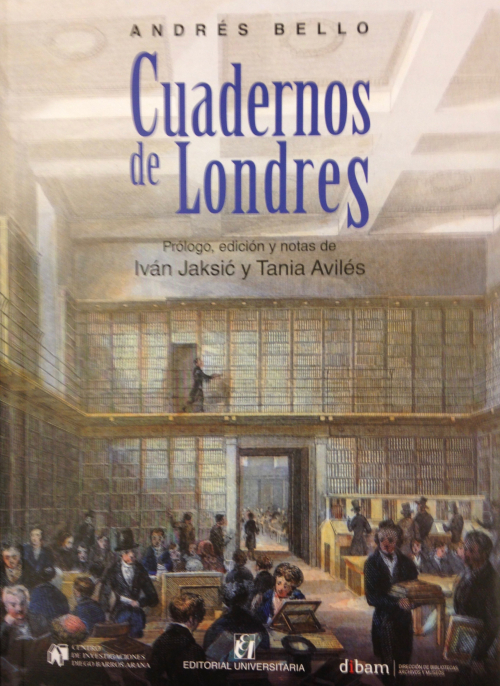 When I started working as Curator for Latin American Published Collections (post 1850) at the British Library at the end of this January, colleagues offered to show me the way to the reading rooms. Although I had been an avid user of the library for years, I had yet to learn to navigate the secret passageways at the periphery – or backstage, as I call them – that surround the light-flooded public spaces and reading rooms. It allows us staff to help today’s users at the centre of the library efficiently and discreetly. So I tried our catalogue on Andrés Bello, whose work I know well, both from my student days at Goethe-Universität, Frankfurt am Main, and as a professor of Hispanic Linguistics teaching his writings on language and grammar. Yet, what I thought was a safe bet, the British Library catalogue turned into a surprise. I certainly didn’t expect to find a bust: 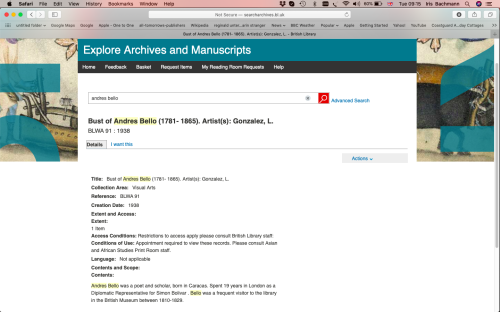 This catalogue entry would become my unofficial induction course to the collections, which I began to inhabit over the course of my search for the elusive bust. The next couple of weeks, I continued to search the catalogue and asked many members of staff along the way, until I found the bust at last in a small meeting room at the end of an open space office at the end of a long corridor – or so it felt to me as I was asking my way to the goal: the bust of Andrés Bello made by his Venezuelan compatriot Lorenzo González in 1938, or what is more likely, a bronze copy of the original bust.

In the temporary absence of libraries (see blog from 13 April 2020), I feel it is important to remember that libraries are also physical spaces that provide more than knowledge and enlightenment, although Andrés Bello would have been the first to hail them for these important services. Thinking of the physical space and its objects, the light-filled atrium and the piazza, where readers and staff mingle in the summer, reminds us of the individuality of different libraries with their specific collection histories; and of their many readers and visitors, most of them not as famous as Andrés Bello, but who, like him, find intellectual nourishment, solace and joy within their walls. We look forward to having them back!

[A readable short introduction to the life and work of Andrés Bello written by a young Rafael Caldera, later to become two-time president of Venezuela.]

Posted by Annalisa Ricciardi at 9:02 AM