The Substance of Libraries

While working from home comes with many benefits, for those of us who work with physical collections it also has some very obvious drawbacks.  Of course the Library hosts a veritable cornucopia of digital materials that are accessible remotely but if, like me, you have a penchant for the analogue then something will remain lacking nonetheless.

I appreciate the focus that working with little interruption in my study enables, but I miss the curiosity, stimulus, and particularly the unpredictable interventions that arise when taking an afternoon meander through the catalogue and calling items to one's desk.  There is value too in the measured pace imposed by waiting for an item to be brought up from its home beneath the Euston Rd (or on the back of a truck from Boston Spa), in the attention to the detail on a meticulously printed page or in a lovingly crafted binding.  Occasionally, rarely, the smell of a book will tell you much about its history.  This particular tome arrived carefully protected by a bespoke phasebox which, upon opening, released a burnt whiff.  Investigation revealed it was a victim of the Blitz bombings that hit the British Museum library.  While many volumes were destroyed, this remains intact aside from the visible damage on the spine. We assume that it was protected by the tight packing of books on the shelf which restricted the spread of the fire. 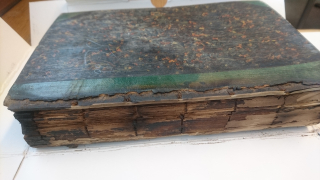 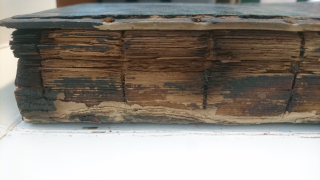 Such pauses bring continuity into one's collections work.  It helps, too, to arrive at work each morning and from the window by my desk see the readers waiting to be admitted form an orderly queue across the terracotta red piazza, alongside a sculpture celebrating knowledge and imagination (Eduardo Paolozzi's Isaac Newton), and a second which meditates on "an essential presence" (Antony Gormley's Planets); and that my regular tea break takes me past the King's Library tower.   The physical space of the Library is thus a constant reminder of how this careful, specific work fits into a larger scheme, a historic collection, and that it is designed for the use of the public.  The main doors open at 9.30am but staff are allowed entry earlier, and so it is not unusual to be in the Library when the main hall is filled with little more than light and the hush of the reading rooms is even more muted than usual. 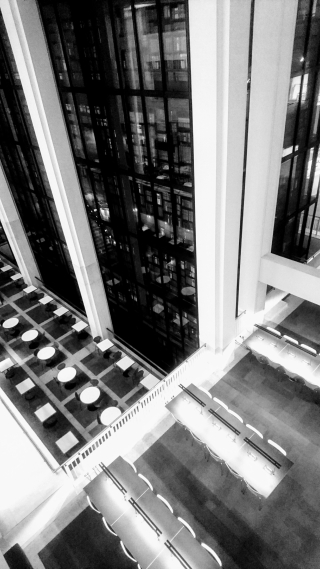 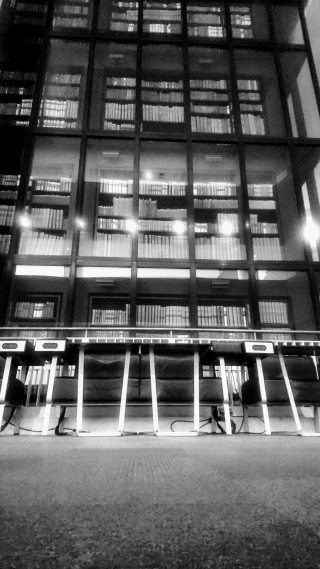 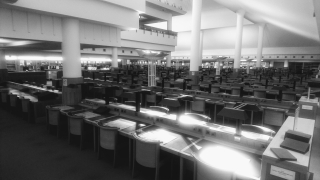 I took the above images in 2018 as part of the twitter black and white libraries challenge (#BWLibraries).  I recall begrudging the 'no people' condition attached to the challenge: 'what is a Library without its readers?', I thought, and I worried about perpetuating a hackneyed image of libraries as quiet, staid, empty places when we are in fact lively and contemporary and relevant.  Still... the British Library does look rather pretty in black and white...

So I wandered the corridors looking for interesting angles and details to capture.  The photographs of an empty building brought to mind the images of the New Topographics photographers.  Characterised by a deadpan view of urban and suburban United States, these photographers (who include Robert Adams, Lewis Baltz, and Stephen Shore) focused a great proportion of their output on buildings that appear devoid of life.  Of particular interest in this instance are the photographs of Madison Public Library taken by John Schott shortly before it was demolished. 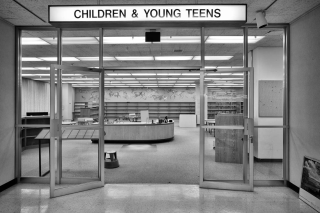 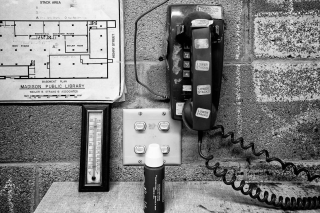 Schott's observational images have an uncanny quality - the setting feels so familiar, this could be any library.  While the public architecture, empty shelves and vacant desks suggest a 'non-place', there remains a vestigial trace of how people used the space: there will be memories attached to these rooms, where a child discovered a favourite book, or a member of staff carefully scanned the stacks and found a misplaced item.

Obviously, now the British Library is mostly empty bar a dedicated team of security staff, but I like to think that there is a vital presence in the place that it is not possible to extinguish by emptying it of people.  The building, like the collections it houses, was made to be used and to be seen, to celebrate knowledge and spark the imagination.  For now, it waits meditatively, full of light and hush, to fulfill its purpose once more. 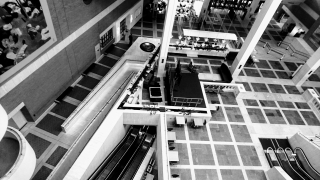 Posted by Francisca Fuentes Rettig at 9:30 AM