Since I received greetings cards featuring the illustrations of the colourful Mexican game la lotería, I had wondered what we have in our collection at the British Library. I have soon discovered an amazing selection of books, and catalogues of linocut and woodcut prints, collected over the years. 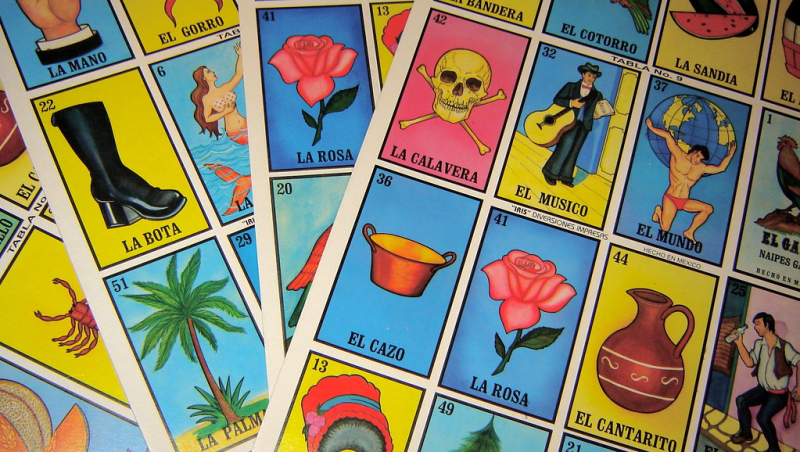 Here began my journey into the magic of the divination game, and its representation through history. From early prints to variants of the digital age at the time of the Pandemic, this has been a multi-sensorial encounter with la lotería. An experience involving sight, imagination and spirit.

A triumph of Mexican colours and vibes, and a vibrant selection of charms, the traditional game of the lotería has its origins in 15th century Italy, a game played for noble and charitable causes, to collect money in support of the poor and commercial activities in financial crisis. It is then thought to have been adopted by Spain in the 16th century, before finally arriving in Mexico in 1769. Initially played by the colonial Mexican elite, the lotería was spontaneously embraced by all classes of society. It would become a mean for communities and families to interact, and to celebrate of traditional events, such as fairs and anniversaries [1].

¡La lotería! ¡Oh! ¡Palabra mágica¡ ¡palabra encantadora! ¡La lotería! [2].  Ignacio Cumplido, a prolific worker of arts and culture in the early 19th century Mexico, was a printer, writer and Mexican politician of liberal ideology. Alongside those pursuits, he also worked for the Museo Nacional of Mexico City, and in 1829 he became director of the press responsible for the printing of the Correo de la Federación Mexicana. He was later in charge of El Fénix de la Libertad, and El Atleta.

In 1844, while elected senator of the state of Mexico, he continued working as a printer and founded a printing school giving jobs and hope to young orphans and the marginalised. In the same year, the Cumplido’s press issued La Lotería, one of the first interesting essays on the phenomenology and psychology behind the fascination with this game of chances [3].

Although Cumplido’s essay refers to the origins and development of the bigger-scale lottery game, where contestants play with numbers printed on tickets previously bought, it is worth drawing attention on the similarity of both games, their origins, and their long-lasting coexistence. It argues that everyone is seduced by the lottery game, a source of illusion and hope, a sort of happiness or, at least, an apparent solace [4]. 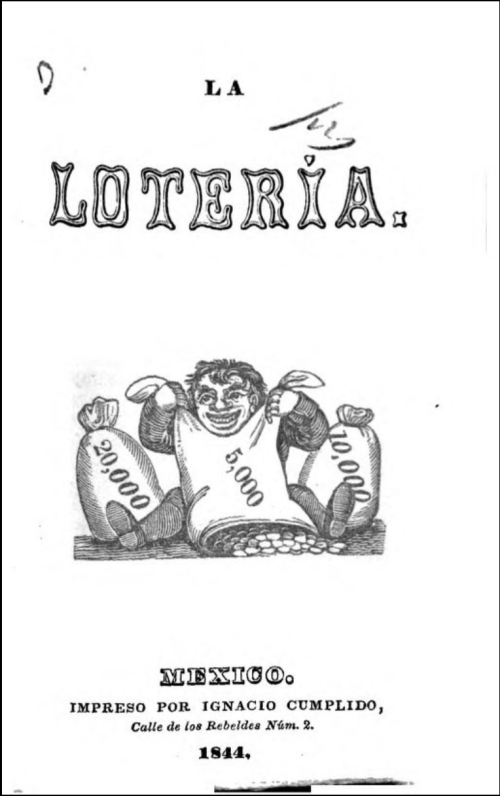 In his series of twelve iconic linocuts for the Lotería cards and fortune poems, the artist Artemio Rodríguez combines mastery of the linocut art of print with the rich “politically-inflected imagery of José Guadalupe Posada”. Made between 1995 and 1998, the artist embodied his linocut illustrations in the traditional Mexican lotería card format. 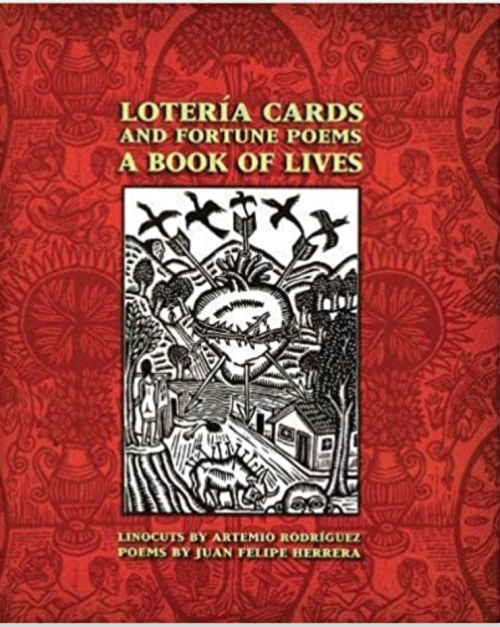 Huasteca is a region of the eastern part of Mexico, an area culturally and ethnographically rich in traditional arts, music and dance, with a precious heritage of indigenous civilizations. In this woodblock collection of prints, Alec Dempster  gives his personal interpretation of this beautiful land, the theatre of the Mesoamerican civilization period, organising visual messages and concepts in an oneiric resolution translated into lotería cards images. 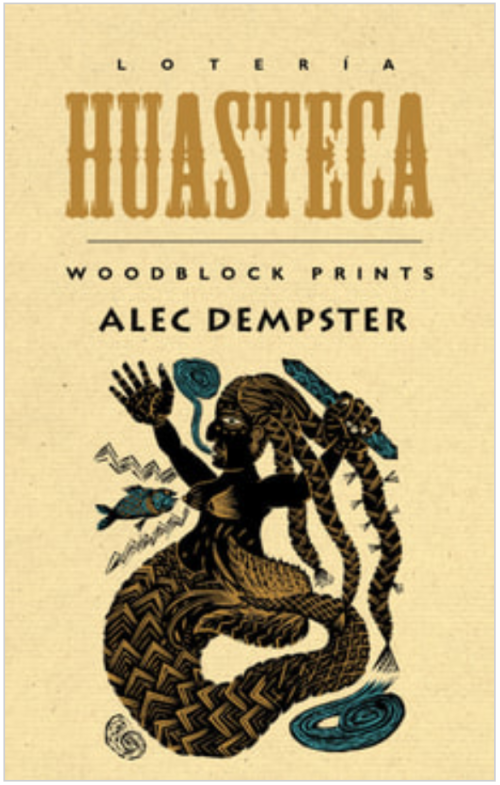 Google has been recently Celebrating Lotería in their Make the most of your time at home project, relaunching some of the most popular Google Doodle games from the Google Doodle Archive.

A smile instantly comes to my face every time I think of Lotería … I think of being with my extended family in Mexico for the holidays …  think of the laughter, the excitement, and how all the worries of the world melted away as this game brought us together, even if just for a few hours. It was exciting to collaborate with five Mexican and Mexican-American illustrators to reimagine many of the classic Lotería game art for the Doodle—along with some new cards for a fun sorpresa! (Perla Campos –Google Doodles, from Celebrating Lotería on the presentation of the game and on how she has been in spired by her memories of her family holidays in Mexico). 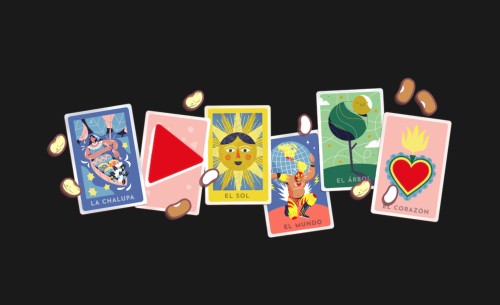 Screenhot from Google page “Popular Google Doodle games”. Make the most of your time at home with popular past Google Doodle: Lotería 2019.

5. El Paraguas. Para el sol y para el agua. The umbrella. For the sun and for the rain.

When I received my first greeting card of the series La Lotería, it was to celebrate an important achievement. A very traditional black umbrella on a blue white-stitched sky background. Come rain or shine, come hell or high water, the umbrella, and what it symbolises, is there to protect me. 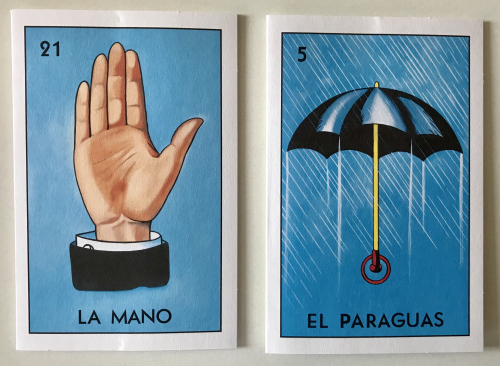 The second card I received, a neat illustration of the hand, was in this instance a fun representation of the need to wash our hands. The advice accompanied a basket of goodies given to me during the first days of the lockdown due to the COVID-19, when it was almost impossible to find bread and pasta on supermarket shelves.

Coincidentally, I then came across new versions of my two greeting cards, La mano and La esperanza, amongst a collection re-designed by the Mexican artist Rafael Gonzales Jr. In Pandemic Lotería, a pop-art portrayal of realism and hope, he reinterprets the traditional signs to represent life in the time of the quarantine. 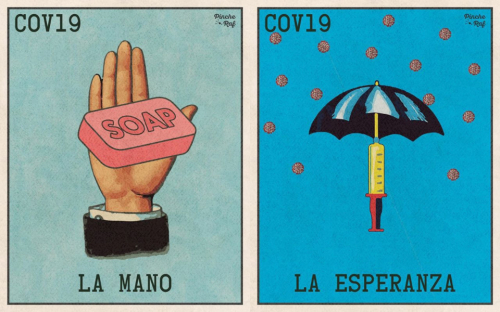 [1] On the history of the game of la lotería, visit Teresa Villegas digital project History of La Loteria, and take the chance to explore her digital installation: Traveling exhibition "La Lotería: An Exploration of Mexico". Mexico and USA.

On the history and origins of the lotería game see also Cumplido’s essay, from pages 4-5  [bibliographic details on note no. 2]

For a more accurate understanding of the linocut art of Artemio Rodríguez, check the article Ingenuity and Homage: Poetic Lotería by Artemio Rodríguez, written by Katherine Blood for On Paper: Journal of the Washington Print Club (Fall 2016 Volume 1, No. 2) and available as a reprint in the blog session of the Library of Congress website: https://bit.ly/3dq5gqG

Posted by Annalisa Ricciardi at 9:08 AM