It is International Worker's Day (also known as Labor Day or May Day) in most of the world today (though not for another week in the UK).  It's now becoming a bit of an BL Americas fixture to share some of our workers' related materials at this time of year.  Given the recent news about the presidential pause placed on issuing green cards, it felt particularly appropriate to bring this pamphlet to your attention: 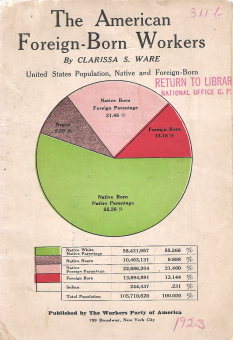 Published in 1923 by the Workers Party of America, this pamphlet breaks down in statistical detail the contributions that immigrants and their offspring have made to American life.  In particular, it shows how they formed a large political force in the late 19th and early 20th Centuries, and made an enormous contribution to US industry and the wider economy.

The pamphlet's author Clarissa S. Ware was a central figure of the party who was in charge of its research office, on the editorial staff for its publication The Liberator, and authored numerous other pamphlets.  Following her tragic early death as the result of complications from an abortion, the Workers' Party obituary described her as "the woman of the Communist society of tomorrow-- frank, unafraid, intellectually capable, yet glorious in her womanhood."[1]  And indeed, her voice and passion for the workers' cause comes across clearly in the pamphlet.

Much of the text is condensed statistical research collated from various sources, but this is broken by punchy and heartfelt political prose and poetry. A particularly memorable section quotes 'The Immigrant' by Frederik J. Haskins

But my brawn is woven into the warp and woof

of the fabric of your national.

My children shall be your children and your land

shall be my land because my sweat and

my blood will cement the foundations

of the America of Tomorrow

The author subsequently extols the poor working conditions and oppression that many faced, arguing that it constituted a concerted effort to weaken organised labor, and ends with a clarion call to all 'foreign-born' to wield their political influence alongside the wider labor force.

Down with the laws oppressing and enslaving the workers, foreign-born as well as native!

Away with the outrageous capitalist plans to register, fingerprint and photograph foreign-born workers like criminals!

Let there be one mighty army of labor!

You can read "The American Foreign-Born Workers" in full as a digital copy on Harvard Library's website.

Posted by Francisca Fuentes Rettig at 10:05 AM