Views from the shore

Changing the perspective on James Cook’s arrival in Australia: online resources offering a view from the shore

At the end of April, 250 years ago, the Gweagal people, in Kurnell (Kamay Botany Bay, New South Wales) encountered strangers approaching their shore. The British versions of this initial contact were recounted in journals and letters which have since been studied and commemorated in Western culture. Extensive celebrations of the bicentenary in 1970 were televised worldwide and included a lengthy royal tour, pageants, and multiple re-enactments of James Cook's arrival. Yet, now in 2020, Cook's legacy in Australia is often the subject of controversial debate with commemoration events considerably more subdued than those 50 years ago. Re-examination of the original journals, letters and documents from the voyages by scholars since the 1970s has offered glimpses of a different narrative, and we are now beginning to hear other views of the events in 1770 and subsequent encounters: those recorded through story, song and dance and passed down through descendants of the Gweagal people and other communities who witnessed Cook's voyage up the east coast of Australia. 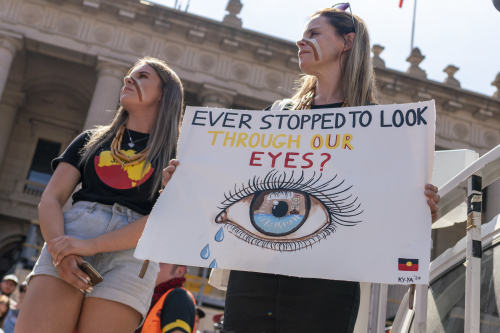 'Ever stopped to look through our eyes?' placard at Australia Day protests in Melbourne on 26 January 2020. Image by Mark Hrkac 2020 on Flickr, Creative Commons BY 2.0

With many of the public events marking the 250th anniversary suspended due to the current global pandemic (see Maria Nugent's perspective on the thwarted anniversary plans in her article, Virtually Captain Cook), we can look to the wealth of online exhibitions and digital resources that have been made available to explore Aboriginal and Torres Strait Islander peoples' accounts of Cook’s arrival in Australia. One such exhibition is the National Museum of Australia’s Endeavour Voyage: The Untold Stories of Cook and the First Australians which will be releasing new digital content to follow the voyage up Australia’s east coast until August 2020. This exhibition looks at the missing voices from the Endeavour story and content includes The Message: The Story from the Shore, a film made in collaboration with Indigenous communities which re-imagines how the news of the arrival of strangers was passed along groups on the east coast.

The Australian National Maritime Museum's Encounters 2020 program includes resources designed to bring to life perspectives from the shore as well as those from the ship. Material here includes an animated short film, The Strange Big Canoe, which combines journal records and Indigenous histories to depict HMB Endeavour’s voyage along the east coast, and the film, East Coast Encounter: Re-imagining 1770, which tells the story of the East Coast Encounter project, where a group of artists re-visit key places where Cook landed on Australia's East Coast. The Australian Government's Shared Histories site, part of their Endeavour 250 anniversary program, draws on items from these national collections to reflect on the events of 1770, and the lasting impact of the voyages on Aboriginal and Torres Strait Islander peoples. 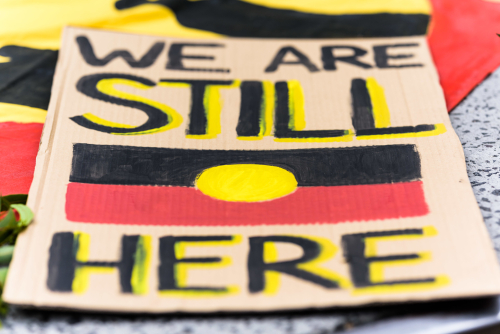 'We are still here' placard. Image by Julian Meehan, 2019 on Flickr Creative Commons BY 2.0

In the UK, the Portico Museum in Manchester, have launched the online exhibition What it is to be here: Colonisation and Resistance which is running until July 2020. The exhibits here trace the First Peoples of Australia’s resistance to colonisation in seven stages, from the first encounters in ‘The view from the shore’ up to the present day in ‘What it is to be here 2020’. This exhibition builds on the connections which have developed between Manchester, AIATSIS and the First Peoples of Australia. This relationship also saw the return of 43 secret sacred and ceremonial objects to the Aranda people of Central Australia, Gangalidda Garawa peoples’ of northwest Queensland, Nyamal people of the Pilbara and Yawuru people of Broome in 2019. 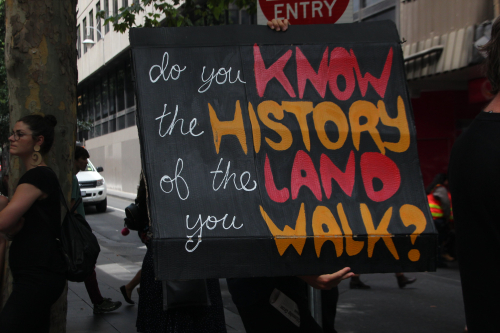 'Do you know the history of the land you walk?' placard at Australia Day protests in Melbourne, 2018. Image by John Englart 2018 on Flickr, Creative Commons BY-SA 2.0

Online material is also available through previous exhibitions on the voyages, including Dr Shayne T. Williams’ article An Indigenous Australian perspective on Cook's arrival and Responses from across the Pacific from the the British Library's James Cook: The Voyages exhibition in 2018. The National Library of Australia held the exhibition Cook and the Pacific from 22 September 2018 to 10 February 2019 and material is still available online, including a useful overview of the exhibition. Resources from this exhibition include First Nation Voices, where contemporary responses to objects from the exhibition were provided by First Nation peoples from the communities visited by Cook on his voyages in the Pacific, and John Maynard's essay, “I’m Captain Cooked”: Aboriginal Perspectives on James Cook, 1770–2020. See also the blog post written during the exhibition which explores the relationships First Nation peoples have now with the Indigenous word-lists that were compiled during the voyages. The National Library of Australia have also created a collection of webpages on the 250th anniversary, captured for posterity through their web archive, which includes many of the sites mentioned in this post. Further digital resources which offer Indigenous perspectives on the 250th anniversary include articles from a variety of media sources. National Indigenous Television (NITV) features a piece from a Wuthathi man who considers why the anniversary can be seen as reason for celebration, award-winning journalist, Paul Daley, reflects on the Cook legacy in his essay On Cook in the literary journal, Meanjin, and ABC News looks at the first sighting of the Endeavour as remembered by the Yuin people of south-eastern Australia as part of their Walking Together series. The Conversation, an online source of viewpoints from the research community, has released a series of articles from Australian and UK academics which reflect on the impact of Cook’s arrival in the Pacific 250 years ago. The articles, 19 at the time of writing, cover a variety of topics from teaching Cook in the classroom to the impact of the voyages on Indigenous women. Maria Nugent, Co-Director, Australian Centre for Indigenous History, Australian National University, considers the Aboriginal Australian viewpoints on Cook collected during the bicentenary in 1970 which continue to shape the way we understand Cook today, while Bruce Buchan (Griffith University) and Eddie Synot (Indigenous Law Centre, University of NSW) explore how First Nations people are using art to challenge and confront Cook's legacies in Australia.

These 'views from the shore' are vital in helping to build a shared and balanced narrative of the encounters in 1770, and allow a deeper understanding of Australia's history: a perspective that, 250 years later, is reflected in the ethos of the official anniversary activities in 2020:

It is an opportunity for Australians of all backgrounds to listen to and learn from each other’s stories, to understand what took place, and to discuss what it means for our future. It is a chance to reflect on our histories and to connect our cultures. (Australian Government, 2020)