This post by Timothy Peacock is part of a special Summer Scholars blog series highlighting the recent research Eccles Centre awards have supported across the Caribbean, Canadian and US collections. 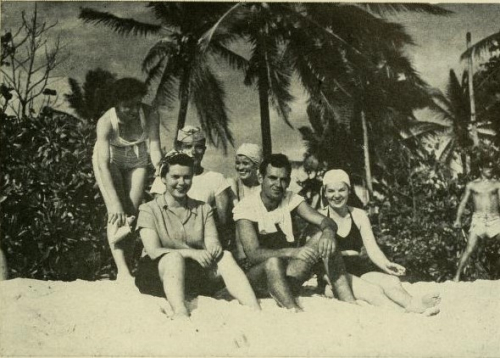 Who would ever think of a nuclear test site as a summer holiday camp?

One of the extraordinary holdings of the British Library is the 'Official Pictorial Record' of the aptly named ‘Operation Crossroads’ in 1946, containing over 200 photographs and accompanying text about the first postwar nuclear bomb test series by the United States.1  The tests, at Bikini Atoll in the Pacific, used atom bombs against a fleet of decommissioned and captured World War II ships.  These detonations set precedents for the peacetime testing of more than 1,000 nuclear weapons over the following decades, displaced populations from their Pacific Island homes, and had global diplomatic impacts.2

The tests also produced some of the most recognisable images of atomic bomb detonations which not only continue to be staples of film and television but have generated sociocultural responses from mushroom-cloud hairdos to memes and protest movements.  The now ubiquitous swimsuit, the bikini - which was unveiled to the world four days after the first detonation - was immediately equated by its creator with the atom: small but full of explosive potential.  Yet unlike the Atoll itself, the swimsuit appears to have escaped widespread association with nuclear testing and its radioactive legacies!

However, the political, military and cultural histories merge within Operation Crossroads: the Official Pictorial Record in the most unexpected ways.  Alongside images of scientific test preparations, atomic detonations and damage surveys, what is perhaps most remarkable about the Record is the number of images which capture aspects of the everyday lives of those involved in the tests, whether working or off-duty - at rest, exercise or while being entertained.

Some of the images look, at first glance, like historic holiday snapshots, the only indicators to the contrary being an ominous line in the accompanying text or occasional visual clues. Sometimes even these clues do not make it clear as to the overarching situation.

One double page in particular captures the holiday camp vibe, entitled, with unconscious irony, “IS EVERYBODY HAPPY?”.  A large group of sailors are pictured paying close attention to a shirtless speaker (Figure 2), who turns out to be a Congressman observing the tests.  The text explains this to have been part of a “Happy Hour”, including a quiz about nuclear physics.  In perhaps a classic representation of the ‘underdog’ triumphing, it proudly records the ships messboys’ victory over the scientists in their quiz knowledge. 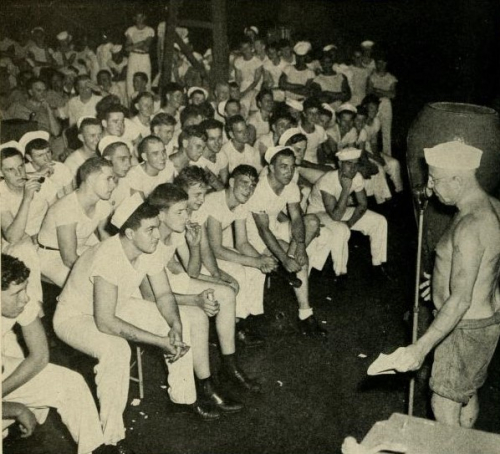 Alongside this image, the other page displays pictures which continue the seaside resort theme.  One of these (Figure 1) is a close-up photograph of women on a beach, surrounding one man, with another in the background, all wearing what appears to be beachwear, some smiling for the camera.  It is only through the caption that we learn of their affiliation as Army nurses serving with the Task Force, with the explanatory caption “relax with friends”.  The description and framing of the image are notable for reinforcing the vacation motif, and also for blurring the distinction regarding the professional identity of the subjects. 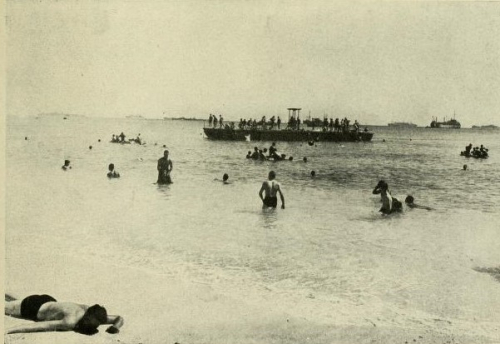 The other image on the page (Figure 3), a large beach scene, filled with off-duty personnel enjoying themselves through such activities as swimming or sunbathing, features some on a landing craft, but the overall ethos is not dissimilar from the pictorial framing of typical holiday scenes.  The caption does, however, include a final line about banning swimming temporarily because of radiation concerns after the Test Able detonation, quickly following this up by saying it was allowed again once safety was ensured.  The attempt to normalise the tests through juxtaposing the photograph and caption is significantly portentous, given the subsequent history of the radioactive transformation of the landscapes depicted. 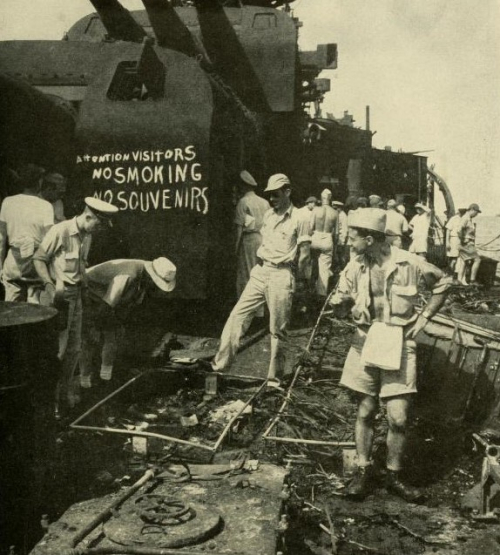 The sardonic humour of the photographs, characteristic in 1940s civil and military life, is incongruous with the overarching seriousness of the nuclear test situation. Figure 4 shows a 'reboarding party' surveying a target ship for damage after one of the nuclear detonations.  The message chalked onto the ship’s hull, “Attention visitors, No Smoking, No Souvenirs”, is a seemingly self-conscious pastiche of signs aimed at tourists in hotel resorts, juxtaposed with the military regulations in place surrounding the tests.  Such writing also echoes related traditions of chalking messages onto bombs during the War, or indeed, of naming some individual nuclear weapons after famous figures.  The Bomb dropped in Crossroads Able test, for example, was christened 'Gilda', and adorned with a stencilled name and Rita Hayworth’s photograph, after the title character she played in the 1946 film Gilda – an association which was not appreciated by the film star herself!  The message on the ship was likely written before detonation, a different message being shown in another photo being written by a sailor.  Its presence is an insight into the attitudes of the unnamed author, a working ‘tourist’ in arguably the most exclusive and, at that moment, unappealing resort.

The radioactive seawater which enveloped the target ships during the Crossroads Baker test made most of them too radioactive to be decontaminated. It has been regarded as one of the world’s first nuclear accidents.  Many of the vessels still lie sunk in Bikini Atoll, a popular location in recent years for a very different kind of enthusiast, those diving to explore the wrecks.

The world-changing effects of a seemingly microscopic globule today in some ways resonate remarkably with the transformation surrounding the splitting of the atom. The official photographs from Crossroads serve not only as a scientific and military record of early nuclear testing, but also as a poignant example of the final moments for those individuals involved of the ‘normality’ of the world as it was, and the end of the holiday.

Dr Timothy Peacock, Eccles Fellow 2019, is a Lecturer in Modern History at the University of Glasgow. He is on Twitter @DrTimPeacock

NB: Readers may also be interested in a blog about Operation Crossroads by Mark Eastwood, who undertook a PhD placement with the Eccles Centre in 2016.