This post by Jeffery Kennedy is part of a special Summer Scholars blog series highlighting the recent research Eccles Centre awards have supported across Caribbean, Canadian and US collections.

As friends and colleagues heard that I had received a Fulbright Scholar Award to the British Library, their first question was to ask what I would be researching.  When I told them a new text on American Theatre history, their puzzled look was typically followed by “At the British Library?”  The reality is that studying British theatre of the 17th and 18th centuries is precisely where one needs to begin as this is the origin from which almost all of Early American theatre springs.  My research goals while a guest of the Library’s Eccles Centre for American Studies revolved around three main threads of study: 1) identifying the British ancestry of colonists recorded to have performed the first play in the American colonies; 2) the significant influence the Puritans had on theatre in both Britain and America; and 3) the Restoration plays that were the first to be performed professionally in the colonies.  I want to report here about the first item, which was the ancestral work the resources at the Library allowed me to complete. 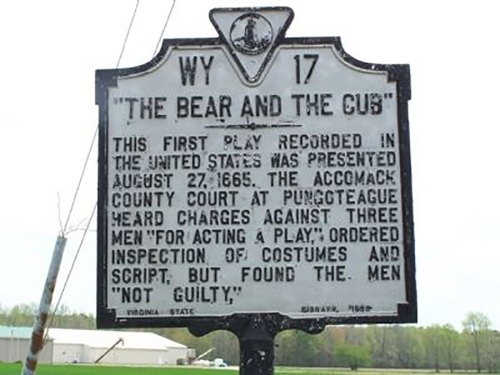 The Bear and the Cub Marker: This sign is located on Highway 17 in Pungoteague, Virginia, telling of the town’s history of staging the first play in America. Image courtesy of Jeffery Kennedy.

The first recorded play performed in the American colonies took place on 27 August 1665 in Pungoteague, Accomack County, Virginia.  The play was titled “Ye Beare and Ye Cubb,” and we know of the performance because of its entry in the legal record.  After being performed in Fowlkes Tavern, a citizen, Edward Martin, reported his moral objection to the local authorities, though what his protest was specifically is not known.  Likely it sprang as a remnant from the twenty-year ban on theatre in Britain that was a result of Puritan dominance after 1640.  The Puritans, who desired a stricter religious practice than the new Church of England required, believed that theatre was, at its core, evil.  Charles I was beheaded as head of the Church of England by the Puritan rebellion led by Oliver Cromwell and monarch rule was suspended.  Puritan influence led to similar kinds of judgements about theatre in America, particularly in the northeastern colonies of New England.  However, the “Restoration” occurred after Charles II was installed as king in 1660, returning Britain to being led by a monarch.  As a result, theatres reopened in London, most often performing frivolous comedies of manners that featured women on stage for the first time. 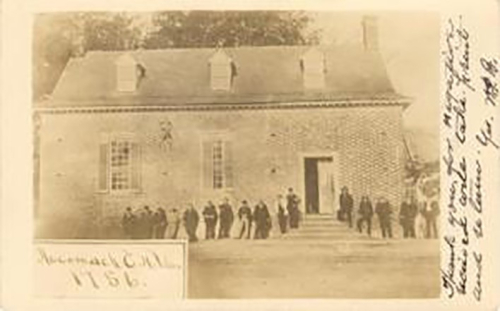 An old photograph of Fowlkes Tavern, courtesy of Jeffery Kennedy.

The local Accomack judges responded to Martin’s charge by bringing before them the play’s likely author, William Darby, and Cornelius Watkinson and Philip Howard, who performed it with him.  After they were “subjected to a rigid cross-examination,” the council ordered them to perform the play at their next session, costumes and all.1  After the performance, finding the play innocent in content as well as intent, the council released the three men from all charges and instead ordered their accuser, Martin, to pay the expenses incurred.  Sadly, there is no existing script of the play, nor are the plot or characters known.  Some scholars conjecture that the title implies a critique of mother England’s (the Bear) newly imposed restrictions on direct sales to other countries of goods created in the colonies (the Cub).  Also, little has been known about the lives of the three who performed the play, particularly Darby.  One of my goals was to conduct genealogical research to see if I could discover anything, including where in England he had emigrated from, something previously unknown.

I consulted many genealogical records within the Library, most of which were typically kept by the local parishes that recorded births, christenings, marriages, and burials.  One of the most helpful was from the Staffordshire Parish Registers Society, published in 1912.2  The evidence strongly suggests that William Darby was born in Tipton, Staffordshire, in the West Midlands of England.  His family moved to nearby Rowley when he was still a boy, and it is here that he married Elizabeth Heywood.  The last record of the family living in Rowley is the 1650 death of William’s middle daughter, Anne, at the age of nine; all references after this locate them in Virginia.  William had five children, and we gain the most information by tracing the life of his eldest son, Daniel. We know that by 1665, the year the play was performed, William was forty-eight-years-old and that this same year 25 year old Daniel married the 22 year old Dorothy Churchill in Accomack County, Virginia.  Dorothy had come to Accomack in 1664 as a “headright,” the name for those who self-indentured; such individuals were provided with passage via ship and basic necessities in exchange for a fixed period of unwaged labour in the new colony.  Whether the Darbys were freemen or became freedmen is so far not known.  Daniel eventually became a land-owner and served in local civic affairs.  How or why William was involved in presenting and perhaps even writing a play is so far unknown, but I intend to pursue this further.

My research through the Eccles Centre yielded this critical information, which is more than has been able to be confirmed to this degree by other scholars.  Sadly, the Covid-19 pandemic required me to return to the U.S. after just a short time, not allowing me to finish more research.  However, I hope to return to the Library’s hallowed halls to pursue even more deeply those Brits involved in the vital launching of theatre in America.