This post by Marie Ruiz is part of a special Summer Scholars blog series highlighting the recent research Eccles Centre awards have supported across the Caribbean, Canadian and US collections.

My research focuses on Victorian emigration societies as well as migration infrastructures such as colonial training centres for female and male emigrants.  In the second half of the 19th century, the growing need for qualified emigrants to people the British Empire led to the creation of colonial training centres for gentlemen and gentlewomen in Britain as well as in the colonies.

My study mainly focuses on the British Women’s Emigration Association (1884–1919).  Its periodical, The Imperial Colonist (Figure 1), being completely accessible at the British Library, my Eccles Centre Visiting Fellowship allowed me to study the journal in depth and focus on the articles relating experiences of colonial training. 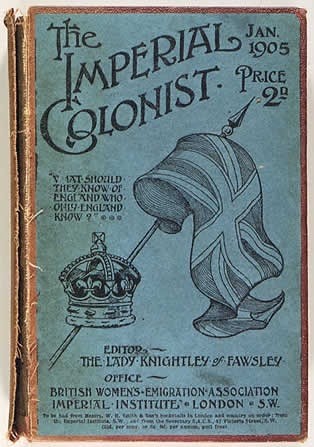 Opened in 1874, the Ontario Agricultural College only accommodated male students until the founding of the MacDonald Institute of Domestic Science for women in 1903.  As young women increasingly left rural Ontario for the urban centres, the MacDonald Institute was expected to increase the appeal of rural life for young men and women.  The objective was to sustain rural life and solve the problem of untrained immigrants in Canada. As such, this training centre addressed concerns of the time: rural depression, colonial productivity and the surplus of women in Britain.  The women involved in such emigrant training ranged from the upper-working class to the upper middle-class.  Many were impoverished upper middle-class or educated upper-working class women and their migration was marked by social mobility.

At the Macdonald Institute, women were taught physiology and food science using chemical testing to determine the food structures, but also food economics to improve the health of the population and overcome poverty, and a growing interest in dietetics is evidenced by the emigrants’ careers.  In 1901, only 6% of British women held occupations in farming, and they were mostly represented in small-scale farming and horticulture.  Advocated by female activists, one solution to the surplus of women question was to open up women’s employment in agriculture and horticulture across the Empire.

Although there were training schools for emigrants in Britain, the colonial authorities were convinced that women could learn better in the colonies.  In 1909, Mary Urie Watson, director of the MacDonald Institute, wrote to the British Women’s Emigration Association to object to the training given to emigrants in Britain before departure.  She proposed setting up courses supervised by colonists in Britain, completed by training in the colonies.1  So, a farm house opened in Surrey, managed by a graduate from the MacDonald Institute, and it replicated Canadian domestic conditions in a course ‘for home makers overseas.’2

The Macdonald Institute worked closely with the British Women’s Emigration Association and in 1904 a scheme was set up to train Englishwomen as housekeepers for Canadian life.  Yet, the scheme was expensive and many emigrants actually only used the opportunity to gain free passage to Canada.  Whereas some emigrants had signed a contract binding them to work for free at the Macdonald Institute in exchange for free education and board, many directly moved to Canada without setting foot at the Macdonald Institute.3  After the Great War, the Macdonald Institute’s training was mostly offered to Ontario students to increase the quality of life in rural homes.  Similarly, British male students at the Ontario Agricultural College represented 10.5% of all students between 1874 and 1899, and this proportion decreased to 4.8% between 1900 and 1929.

Agricultural training provided higher education for women, yet it remained home-based and in keeping with the macro-narrative on women’s role in society and in the household. Hence, the Macdonald Institute may also have been founded to encourage rural marriages as the Minister of Agriculture declared in 1904: ‘I want some one [sic] to love the girls who come to the Macdonald Institute’ to which journalist James Creelman replied ‘The College boys will do that.’4  Indeed, male and female students regularly met during mixed classes in the Ontario Agricultural College buildings and at the library. 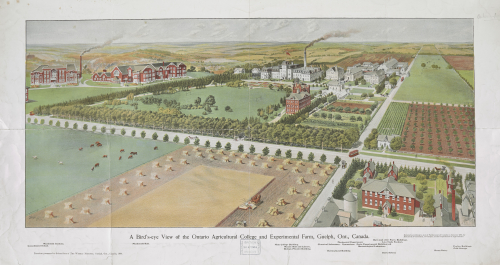 In conclusion, the study of colonial training centres highlights the development of scientific education for women as a response to pressing concerns about the health and welfare of the nation.  Yet, the figures show that the Macdonald Institute did not train a high number of British immigrants, but farming and gardening became career options for unmarried gentlewomen in this period.  This was promoted by British female activists such as Jessie Boucherett and Frances Power Cobbe who were convinced that solutions were to be found at home before considering emigration.  The Macdonald Institute represented a tool in the campaign for female emancipation and imperialist propaganda, and paved the way for women’s scientific education.