Listeners to BBC Radio 4’s Saturday Live programme will know of its ‘Inheritance Tracks’ feature. For those unfamiliar with the show, this is a segment where a famous person chooses two pieces of music, one which they’ve ‘inherited’ (usually something from their childhood or youth) and one which they would ‘pass on’ to later generations (usually a favourite or significant piece from their adult life), and talk about what the tracks mean to them. We have borrowed this idea for a collaborative series of blog posts with our European Studies colleagues about our British Library ‘Inheritance Books’. Colleagues choose an ‘inherited’ item that was already in the library when we started working here, and one that we have acquired or catalogued for our collections during our own time to ‘pass on’ to future users, visitors and colleagues, and will explain why they’re important to us. This week, Lucy Rowland, responsible for the Oceania collections, shares her selections.

I began looking after the collection of contemporary publications from Australia, Aotearoa/New Zealand and the Pacific in 2018 and was struck straight away by how difficult it was to really 'know' the extent of this printed collection. In previous library roles I had been able to do this by spending time wandering in the stacks, familiarising myself with the contents, shelving books, and becoming so used to the titles, colours and shapes on the shelves that a new book would become immediately apparent. But the British Library is different. Very different. With over 170 million items  included in the Library's collections, 'wandering in the stacks' is not just not an option. In fact, it would take over 80,000 years to see the entire collection held at the British Library. Yet my difficulty in understanding what the Oceania printed collection entailed wasn't just due to the sheer volume of items, but also that the fact that the material involved is all over the place. I say all over the place, but I know my colleagues involved in organising and retrieving this material would say that they are in the exact place they should be, thank you very much! 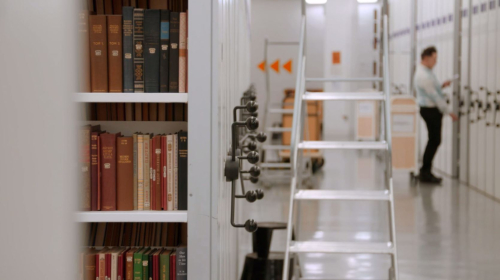 Book stacks in the basements at the St Pancras site. Image from British Library

What I mean is that, aside from some items kept on open shelves in the Reading Rooms, printed material is spread between the London (St Pancras) and Yorkshire (Boston Spa) sites in various buildings, including ones ruled by robots working in the dark, and basements so deep that the Victoria line runs alongside them. As these shelves are not designed for browsing, the items can be stored in ways which make more sense for retrieval and preservation purposes. Which means you won't usually find books grouped together by author or subject for example, as material is organised on the shelves by size, usage, value or rarity, arrival date, language, or even by provenance. I could never go and visit the printed Oceania collection in its entirety, but instead rely on collection guides, catalogues, bibliographies, handlists and the knowledge of my many learned colleagues to explore the full breadth of the collection.

Which brings me to my 'inherited item', as having everything all over the place means that every now and then, you get a wonderful surprise when you discover something in the collection that you didn't know was there (and give thanks to your predecessors). One of these items for me was an Indigenous Australian adaptation of Lewis Carroll's Alice's Adventure's in Wonderland. It has never been standard practice to collect international picture books at the British Library (though UK children's books are collected through legal deposit), so it was a very welcome surprise to come across this title in the collection. 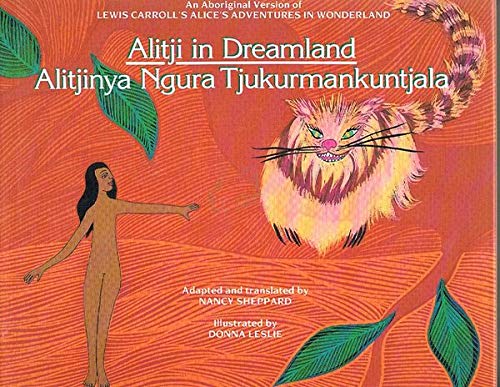 Alitji in Dreamland/Alitjinya ngura tjukurmankuntjala is a bilingual picture book in Pitjantjatjara and English, first published in 1975 (shelfmark YA.1996.a.6667) with illustrations by Byron S. Sewell. This retelling of the Alice tale is set in an Indigenous Australian context with landscape, animals and cultural references familiar to its intended readers. It was produced by the Department of Adult Education at the University of Adelaide where the author, Nancy Sheppard, taught the Pitjantjatjara language of the Anangu people from 1968-75: the first course of its kind in Australia. Primarily an oral language, the written format was only confirmed in 1987 with publication of a Pitjantjatjara–English dictionary: which makes this adaptation one of the earliest picture books Anangu children were able to enjoy in their first language. The later 1992 edition (shelfmark LB.31.a.6178), pictured above, is the more significant version in my mind as this one has been illustrated by the Gamileroi academic and artist Donna Leslie, and is more explicit in supporting Sheppard's post-colonial interrogation of the Alice narrative:

Horse (March Hare): Your skin is very dark. You ought to wash yourself

Alitji (Alice): My skin is always dark, even after washing

Coming across this book felt particularly significant to me at the time as it represented a tangible link between my new role at the British Library, where the original manuscript of Alice's Adventures in Wonderland is held, and the place where I grew up near Adelaide in South Australia. I was taught elements of the Pitjantjatjara language in primary school by visiting Elders from the Central Australian desert region, and though I have failed to retain many of these words as an adult, the appreciation for what I now realise was quite an unusual education initiative at the time has never left me. I am pleased that my young nephews now also benefit from a similar initiative with the revitalisation of Indigenous language learning taking place in schools across Australia.

Item to pass on

How to choose? There are so many titles worthy of this merit, so I will go with the most recent item (another Australian item I'm afraid) and what was one of the hardest to obtain (see below): a special issue of the Northern Territory newspaper, NT News. The Thursday 5th March 2020 edition of this tabloid paper included an 8 page insert of toilet newspaper with the headline "Run out of loo paper?". This special edition was produced as a very Aussie tongue-in-cheek response to the panic surrounding shortages of toilet paper across many states in in the country at the start of the Covid-19 pandemic. Although this lighthearted joke now feels somewhat callous in hindsight, at the time of publication in early March 2020 the virus had not yet been confirmed as a pandemic and no-one could have anticipated the devastating scale of the crisis yet to come. As such, this special issue will now take its place in the Oceania collection as an example of a moment when Australia, like many other countries, was not yet aware they were balanced on the precipice of a global disaster, and were still able to make light of the behaviour surrounding a virus which has since killed more than half a million people worldwide as of July 2020. I was alerted of this issue by a colleague and tried in vain to obtain a copy from the newspaper office in Darwin (who incidentally had apparently received numerous requests from libraries). In the end I resorted to besieging friends and family in Australia with requests to track down a copy for me. Luckily an old friend living in Darwin came up trumps and went to the office herself to collect one (thanks Jo!) and promised to send it over. This was early March 2020 and the world (including the postal system) was coming to a standstill, so I had almost given up on receiving this when it finally arrived over 2 months later. By this point the British Library had been closed for some time, which means I am sadly not able to provide a shelfmark as yet.

For other posts in the Inheritance Books series so far see: