The Perils of Diplomatic Protection in the Early 19th Century

This post by Vanessa Mongey is part of a special Summer Scholars blog series highlighting the recent research Eccles Centre awards have supported across Caribbean, Canadian and US collections.

How far should diplomatic protection extend?  Surely, consul James Buchanan argued, there must be limits to American “humanity.”  In Belize, a British settlement in Central America, Buchanan was trying to understand his responsibilities towards U.S. citizens.  The hurricane season of 1849 had caused a few ships to wreck near the coast and the officers, crew, and passengers had sought refuge in the port of Belize.  They turned to Buchanan for help.  The consul paid for a few destitute sailors to return home, but the situation soon got out of control. Officers demanded he pay for their room and board.  Sailors asked storekeepers to send their bills to him.

When the consul refused to reimburse all these expenses, the crew complained to the local British police and magistrates.  They turned to the Act for the Relief and Protection of American Seamen (1796) that provided certificates for the protection of sailors.  They argued that the U.S. government owed them not only diplomatic but also financial protection. Buchanan was as annoyed as he was confused.  He asked the State Department what to do with U.S. citizens stranded abroad.  He confessed that he had “no legal knowledge of what the consul’s duties are in this matter.” 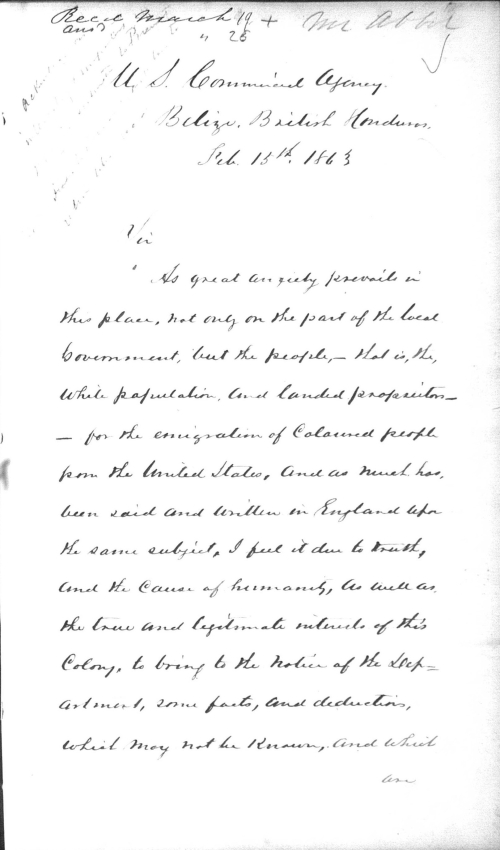 An example of consular correspondence. Part of a letter from U.S. Consul to State Department, 15 February 1863. The letter mentions white settlers' anxieties around plans by the government of British Honduras (today's Belize) to encourage African American immigration from the U.S.  British Library shelfmark (microfilm): T334 Despatches from U.S. Consuls in Belize, 1847-1906, roll 1, 1847 –1863.

The correspondences of U.S. consular representatives in the British Library abound with this kind of complaints and queries.  Many politicians, jurists, and citizens in the United States embraced the view that individuals had a natural right to leave their country.  Increasing numbers of U.S. Americans traveled abroad during the nineteenth century. Some served in Latin American independent armies and navies.  Many settled in neighbouring foreign territories like Florida, Texas, and California, eventually leading the United States to invade and annex these territories.  Freedom of movement often bolstered U.S continental and commercial ambitions.

Although the nineteenth century saw relatively unregulated movement, the right to travel was racialized.  Freedom of movement was often a privilege of European and Euro-descendants as shown by tensions surrounding Chinese immigration to California and issues around enslaved and free travelers of African descent moving across state and national lines.

Even for free white U.S. Americans, the right to travel freely created new challenges: what happened when citizens crossed international borders and got into trouble abroad? Instrumental in defining and implementing diplomatic protection were consular networks.  Lacking a significant overseas presence in the first half of the nineteenth century, the U.S. government possessed neither the resources nor the capabilities to monitor the activities of their citizens abroad.  With no formal training, consuls were the ones on the ground who assisted Americans when they ended up in jail, aided them in navigating estate and inheritance issues, or represented their legal interests.  They often had to decide whether an individual was really a U.S. citizen, and therefore entitled to consular protection, at a time when no definition of national citizenship existed. 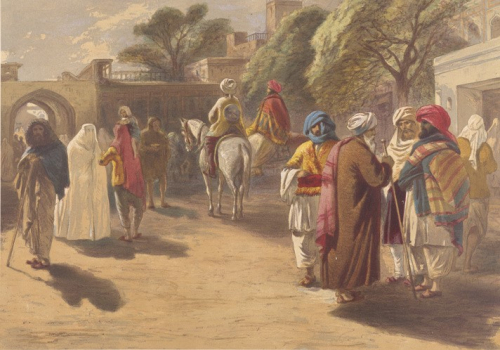 During the first half of the nineteenth century, the United States could not set up permanent consular posts in India.  The British kept tight control over the region, thwarting U.S. consuls in Calcutta (Kolkata) and Bombay (Mumbai).  The India Office Records and Private Papers in the British Library show that tensions frequently erupted between British and U.S. representatives.  British authorities complained about distressed sailors who ended up in their care.  One U.S. consul in Singapore simply refused to help naturalized American citizens, arguing that those who were born British subjects fell under the Common Law doctrine of perpetual allegiance.  In brief, once British, always British—especially if these individuals were potential drains on consular finances.

In addition to uncertainty and confusion expressed by U.S. consuls, these correspondences also reveal how U.S. citizens understood their rights and responsibilities.  When they had the resources or the connections, they sent letters to journal editors in the United States, hoping to put pressure on consuls.

This early phase of diplomatic experimentation came to an end in the middle of the nineteenth century.  As the U.S. consular service expanded outside of Europe and the Americas and into China, Japan, and Siam, the government formalised the diplomatic and consular system in 1856.  A reform legislation introduced salaries for a greater number of consular officials, hoping to reduce corruption and professionalise the service.  The same year, the State Department received sole issuing power over passports and limited their use to U.S. citizens, thus reducing the autonomy of consuls.  The Civil War (1861-1865) prompted a sharp growth of the consular service. At the end of the war, the fourteenth amendment defined national citizenship to include all persons born or naturalized in the United States.  Monitoring international travel served as a testing ground for restrictions of citizenship rights along class, gender, and racial lines.

For US Federal Government Publications, the finding aid Diplomatic Records: A select catalog of National Archives Microfilm Publications (shelf mark OPL 973.0076) is available in the Social Sciences reading room. It has been annotated to indicate which microfilms are in the British Library and gives their shelfmarks. I made particular use of ‘The correspondences of U.S. ministers at overseas posts’ (shelfmark SPR Mic.B.21) and ‘U.S. consuls at overseas ports’ (shelfmark SPR Mic.B.22). The India Office Records and Private Papers: the general shelfmark is IOR/Z/E/ and this is the collection guide.