To celebrate this important anniversary, this blog highlights some of the US women's suffrage music held at the British Library. 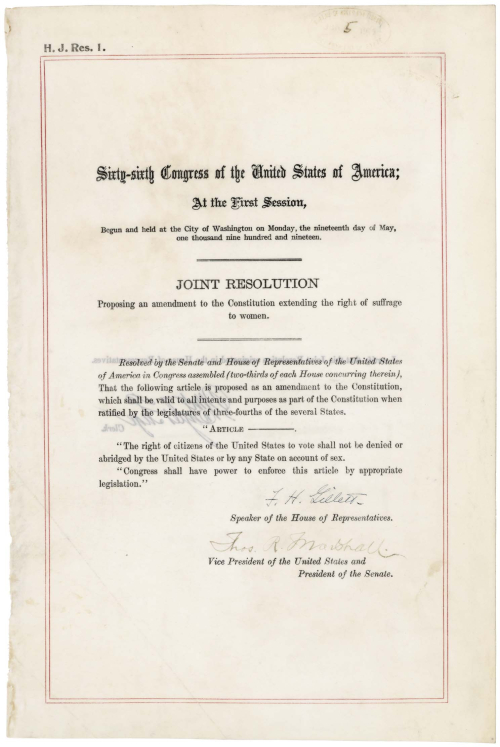 The Nineteenth (XIX) Amendment to the US Constitution passed a vote in the House of Representatives on 21 May 1919 and in the Senate on 4 June 1919; it was then sent to the states for ratification.  On 18 August 1920 it was ratified by Tennessee, the 36th - and final - state needed to ensure its adoption.  Image: National Archives and Records Administration (NARA); courtesy Wikimedia Commons.

Although brief, this Nineteenth Amendment was the culmination of a decades-long struggle for women's suffrage. This struggle formally began in July 1848 at Seneca Falls, New York, where, at a convention organised by Elizabeth Cady Stanton and Lucretia Mott, around 300 people gathered to discuss "the social, civil and religious condition and rights of women." In the 72 years that followed, activists for women's suffrage created many organisations and used many strategies to achieve their goal. In the end, however, it was amending the Constitution - rather than persuading individual states to extend the franchise - that was successful.

To commemorate this milestone, US institutions, including the Library of Congress, the National Archives Museum, and the Smithsonian's National Museum of American History, are illuminating the complex, challenging and inspirational story of the movement for female suffrage with brilliant online exhibitions. 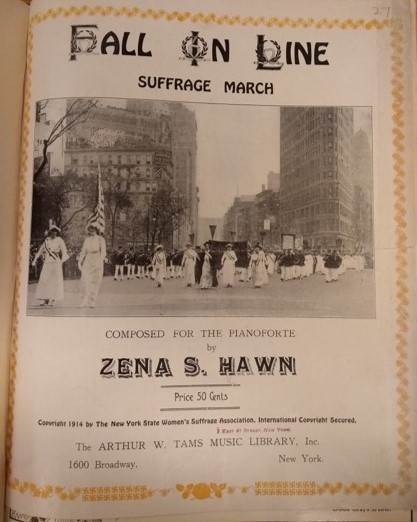 The copyright for this song was held by the New York Women's Suffrage Association which would have benefited from any sales. The cover photograph depicts one of the suffrage rallies held in New York City, 1912-14. In 1917 women gained the right to vote in New York State; this played a critical role in US President Woodrow Wilson's decision to support what would become the Nineteenth Amendment to the US Constitution.
Zena S. Hawn, Fall in Line: Suffrage March. New York: Arthur W. Tams Music Library, c.1914.  British Library Music Collections: H.3826.r.(27.)

In the late 1980s, I had the great good fortune to work as an intern on the Papers of Elizabeth Cady Stanton and Susan B. Anthony. Spanning the years 1831 to 1906 this vast microfilm project – then housed at the University of Massachusetts, Amherst – brought together more than 14,000 documents relating to these two extraordinary women. As a new graduate student with little experience of working with primary sources, transcribing Stanton and Anthony’s correspondence and indexing their weekly newspaper, The Revolution, was priceless. Yet, even then it was clear that Stanton and Anthony’s activism was not without flaws; particularly, regarding issues of race.

What excites me today as I browse these centenary exhibitions, is seeing Stanton and Anthony's contributions as one strand - albeit a hugely significant one - of the suffrage journey and realising how much is still being discovered about all of the women and men who petitioned, organised, marched, wrote to representatives, senators, and presidents, argued with friends and family, argued with each other, and ultimately refused to give up.

Viewing these virtual exhibitions has also made me extremely jealous of the collection items held by these American institutions; but that is for another day! Today, we are simply celebrating this 100th anniversary by sharing some of the women’s suffrage sheet music held by the British Library. 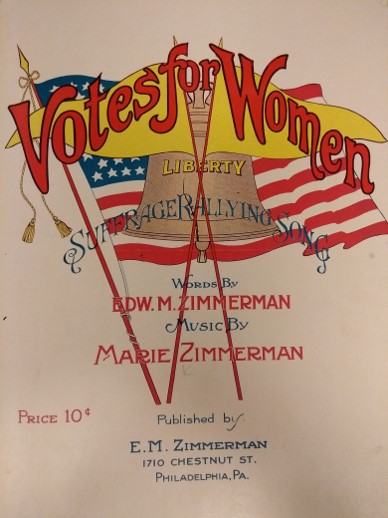 Like all great American reform movements in the nineteenth and early twentieth century, the one for women’s suffrage was imbued with songs and marches. This is not surprising, given the prominent role that music played in homes, churches and social and political gatherings at this time. 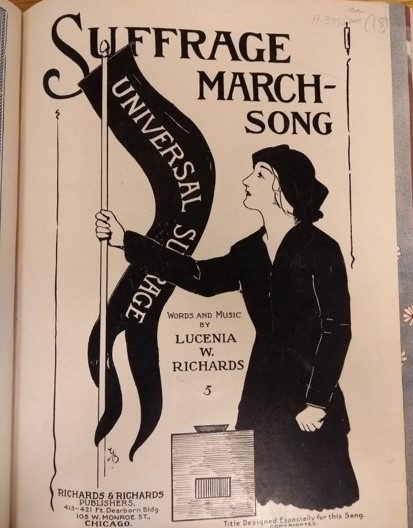 This song was privately printed by its female composer and in her  dedication she urges women to: 'Never fail to keep the cause of woman's suffrage foremost in your mind ... it is your cause and you must support it.'
Lucenia W. Richards, Suffrage March Song. Chicago: Richards & Richards, 1914.  British Library Music Collections: H.3995.nn.(18.)

Today, historians often categorise suffrage music into "parlour songs" and "rally songs". Although the lines of demarcation between these two are somewhat blurred, rally songs tended to be well-known tunes - usually hymns or anthems - that had been given new, pro-suffrage lyrics. At public gatherings, this style of music-making was particularly advantageous since the new lyrics, printed inexpensively on a single sheet of paper, could quickly be passed around a crowd. One or two people would then kick off the melody and everybody else could join in.

Compilations of suffrage songs - often a combination of these re-worded hymns with original compositions - were frequently published by local and national suffrage associations as a means to raise funds. Others, including the one below, were created by single individuals: 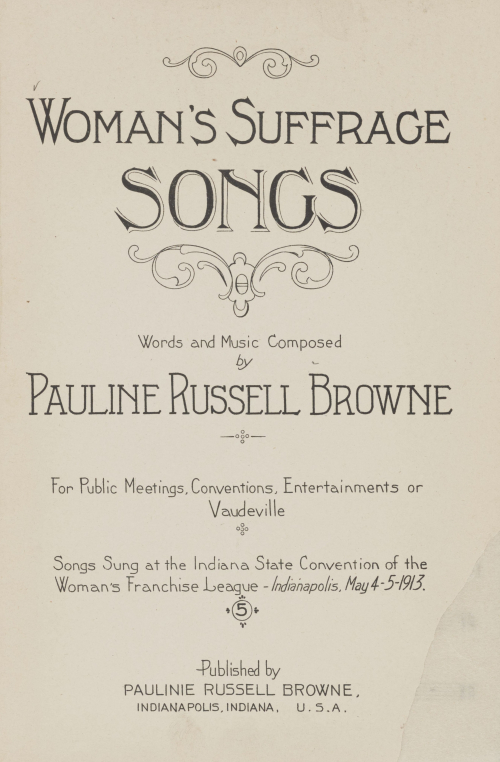 In contrast to rally songs, "parlour songs" tended to have both original lyrics and original tunes. They enabled the singer – in the non-threatening environment of her own home – to express why women wanted the vote and the benefits this would bring to society. Many appealed to the listener’s sense of justice and fair play, including the one below, which opens with the declaration that: "No man is greater than his mother / No man is better than the wife he loves." It then lists women's qualities and accomplishments, before arriving at the surely inevitable conclusion that women also deserve to vote: 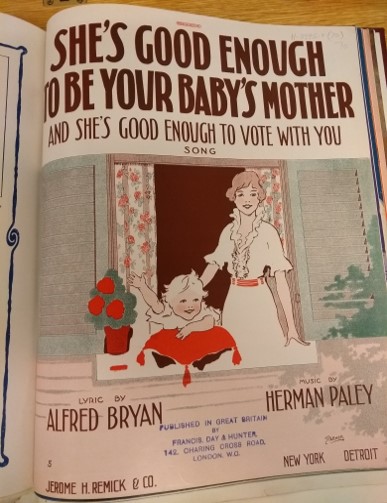 Opposition to female suffrage took many forms, but particularly common were accusations that women would become "sexless" (scathing references to "spinsters" were common) or would neglect their homes and families. These views were reflected in the sheet music of the time, including in the song below. Published in 1913, this song is full of stereotypes not only about those supporting women's suffrage but also about Italian Americans. The song's protagonist bewails the fact that since "his" Margarette became a suffragette, not only does she no longer cook or clean the house, but, worst of all, "She wear a-da pants / Dat kill da romance..." 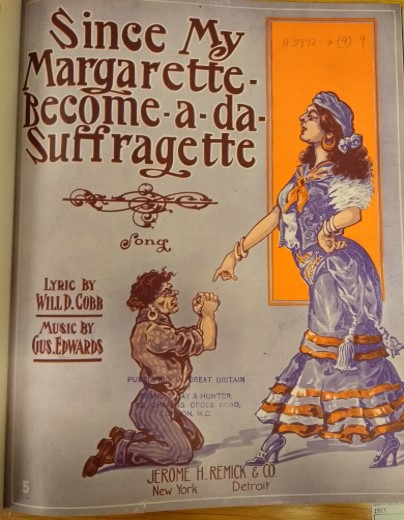 From the earliest days, there were strong ties between those working for women's suffrage in the United States and their counterparts in Great Britain. In the 1910s, concern about the increasing militancy of the British movement was reflected not only in the American press but also in popular music. The cover illustration of the song below, published in New Jersey in 1912, depicts British suffragettes marching in their sashes while throwing bricks and breaking windows. The song’s protagonist – recently arrived from England – shares the horrors he has witnessed there and concludes in the chorus: "They’re growing too strenuous by jingo/ These women on mischief are bent/ With brick bats they’ve smashed all the windows/ And raided the Houses of Parliament/ They’re wearing men’s collars and shirt fronts/ Less bashful are these sweet coquettes/ They’re after our votes just as well as our notes/ And our trousers! Oh! You suffragettes": 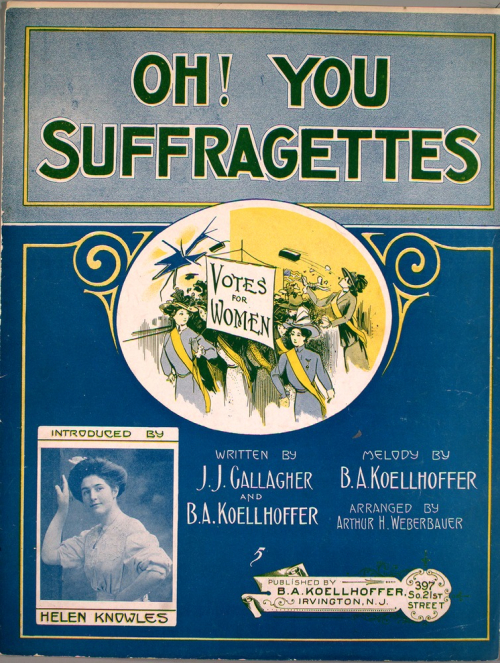 In spite of the vigorous efforts of the anti-suffrage contingent, on 19 January 1918 US President Woodrow Wilson announced his support for an amendment to the Constitution of the United States that would guarantee women the right to vote. This Nineteenth Amendment was passed by Congress on 4 June 1919, ratified on 18 August 1920 and officially incorporated into the Constitution on 26 August 1920.

Due to Covid restrictions, some of the images in this blog are from non-British Library sources; I wish to express my thanks to these institutions.

Please note, you can read more about Bella Abzug and other women involved in the (still-ongoing) battle for the Equal Rights Amendment in my colleague Rachael Culley's evocative two-part blog inspired by the recent TV series Mrs America. Please also note that the British Library's next major exhibition 'Unfinished Business: The Fight for Women's Rights', is currently on hold until later in the year.