Following on from part one of our Mrs. America-themed blog, we continue to look at the themes and characters featured in the FX mini-series and how they are represented in British Library collections.

The show depicts the parallel efforts between the feminists rallying to ratify the Equal Rights Amendment in America during the 1970s, and conservative activist Phyllis Schlafly who leads the fight against the Amendment’s passing. While Library collections have limited accessibility at the moment, we hope this blog serves has a welcome reminder of the items available for Readers’ research, inspiration and enjoyment as and when holdings can be made fully available again.

Please note that images in this article have been retrieved from online sources as I have been unable to access and photograph Library collections. Therefore there may be some discrepancy in what the Library’s holdings look like in comparison to the items pictured in this blog.

The name Betty Friedan and her 1963 manifesto, The Feminine Mystique, may be the most well-known of the characters and works featured in Mrs. America. Friedan was the first president of the National Organization for women and co-founded the National Women’s Political Caucus with Bella Abzug and Gloria Steinem.

The Feminine Mystique is widely credited with sparking the second-wave feminism movement that arose in America during the 1960s and 70s. It was whilst having conversations with former members of her Smith College contingent that Friedan realised the level of disillusionment and satisfaction amongst both herself and her former classmates; her research on these suburban housewives led to her coining the term the ‘feminine mystique’ and to the eventual publication of the text. Her description of ‘the problem that has no name’ – that is, the systematic, underlying beliefs and institutions that led to women’s disempowerment and kept them in the home – spoke to the women readers who had, for so long, struggled to articulate the feelings of disenchantment they experienced while quietly occupying their life as mother, wife and homemaker. Inspired by the feeling of possibility invoked by Friedan, women were empowered to see how it wasn’t too late to reclaim their lives.

The Feminine Mystique was first published on 19 February 1963 by the New York-based W. W. Norton and Co. It would quickly become a bestseller, with over one million copies of the paperback being purchased in its first run. The British Library holds a version of the book published later on in 1963 in London by Victor Gollancz (shelfmark: 8418.m.8.), a British publisher and humanitarian known as a supporter of left-wing causes. 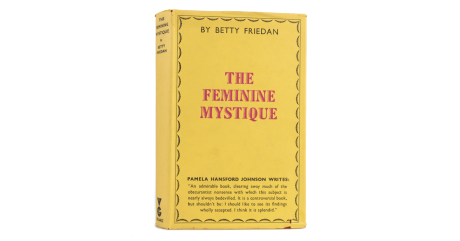 In Mrs. America, the relationship between Gloria Steinem and Betty Friedan is an interesting one to observe; the two trailblazers association has been documented as acrimonious, with Friedan stating in a 1972 speech about Steinem that ‘the media tried to make her a celebrity, but no one should mistake her for a leader.’ This is represented in the TV show, with various comments being flung between the two, although a touching moment occurs between them after Friedan is antagonised by Schlafly during a heated televised debate. Friedan is left publically humiliated having let her emotions seemingly get the better of her on screen, frustratingly, if only momentarily, damaging her professionalism and proficient demeanour in the public eye. Steinem stands in solidarity with Friedan, despite their disagreements, telling her “I have been thinking about the first time I read The Feminine Mystique. ‘Why should women accept this picture of a half-life, instead of share in the whole of human destiny?’ I don’t know if I ever told you. Your book changed my life. Thank you.”

Writer and political activist Phyllis Schlafly is at the heart of Mrs. America. Leading the opposing argument to the ratification of the Equal Rights Amendment, she rallies women across America to join her in the fight against the women’s rights movement – representing conservative and traditional family values. The small-screen retelling of Schlafly’s 1960s-70s activities reference her 1952 campaign for the US House of Representatives. Having established her strongly anti-Communist stance and political positioning, Schlafly is frequently pictured as the only women in a room of suited and booted white men in the scenes that take place in Washington. Mrs. America traces Schlafly’s actions as she turns her attention to the ERA and women’s issues.

The Phyllis Schlafly Newsletter was her monthly bulletin used to gather fellow women supporters and inform them of political issues. When the ERA was passed by Congress in 1972, Schlafly used her newsletter to publicly oppose the amendment, fearful that its ratification would undermine traditional US values and among other concerns, lead to women (‘your daughters’ as she emotively refers to them) being drafted into the army. Mrs. America depicts Cate Blanchett as Schlafly, dedicatedly and single-handedly authoring, typing and mailing out copies from her home, taking on the role of both ‘boss’ and assistant. With momentum for her argument gathered, she and her supporters established the Stop ERA lobbying group with factions spread out across the country. And so the plot of Mrs. America unfolds…

Schlafly was a well-organised, powerful and eloquent public speaker, particularly on anti-feminist topics. While this divided audiences (Schlafly infamously received a pie to the face from one of her many opposers), she articulated her position in the 1977 book The Power of the Positive Woman. In it, we are introduced to characters like the White Knight, the Black Demon, and, The Positive Woman. Schlafly attacks what she believes are the false promises of the women’s movements and argues that any further equality for women i.e. the passing of the ERA, would hinder the fabric of American society. The New York Times has an interesting 1977 review on what they call this ‘strange little book’. Strange as it may be, its sentiment was enough to galvanise the support of housewives up and down America, so much so that the ERA eventually failed to be ratified by the required majority of states. The British Library holds a c.1977 copy of the book published by Arlington House in New York (shelfmark: 78/2650). 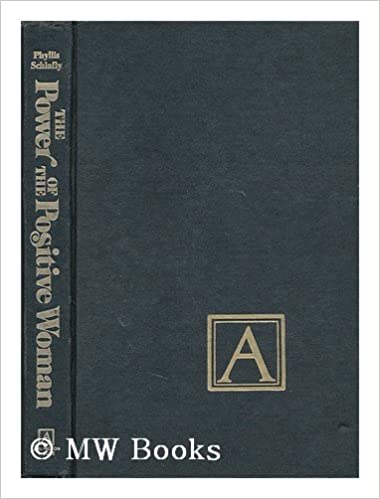 Perhaps to show that even her campaigning should never take precedence over role as a housewife, dinner for her family, including six children, was always on the table at 6 o'clock each evening, a point made in Mrs. America. After receiving her phone call of rejection from Ronald Reagan in 1980 (after aiding Reagan in the elections, Schlafly had her sights set on a Cabinet position), she puts down the receiver and affirms to her husband: ‘dinner is always at 6’. Impeded on the way to achieve her political ambition once again, she moves from her desk to the kitchen table to peel apples. A melancholy juxtaposition of a closing scene – a woman driven by political fervour resuming her place as homemaker, just as her campaign would have wanted…

Gloria Steinem, writer, lecturer, political activist, and feminist organiser, is another key player in Mrs. America. Steinem became a pivotal spokeswoman for the American feminist movement in the late 1960s and early 1970s, speaking out for the empowerment of women on topics such as abortion (Steinem was a fervent pro-choice advocate) as well as on issues including children's education where she sought to break down barriers based on sex and race. As this National Geographic article expresses, Steinem’s concerns were global, ‘she understood…race, class, and caste’.

Steinem co-founded Ms. magazine in 1972 and helped found both the Women's Action Alliance and the National Women's Political Caucus, the latter being ‘a group that continues to work to advance the numbers of pro-equality women in elected and appointed office at a national and state level’. Steinem gained attention for her journalism when she published the two-part feature entitled ‘A Bunny’s Tale’ in Show magazine in 1963. In it, Steinem tells of how she was hired as a Bunny Girl and details the conditions in which she, and the other Bunnies, were made to work, including the sexual demands made on them. This 2013 Guardian article explored ‘A Bunny’s Tale’ and its contemporary relevance when the feature turned 50 years old.

The British Library holds a number of copies of Ms. magazine, from 1987 onwards when the magazine switched from monthly to quarterly (shelfmark: ZA.9.a.6674). Ms. was founded by Steinem and Dorothy Pitman Hughes, the African American human rights activist, feminist, and child-care advocate. The Spring ’72 issue, featuring a depiction of a version of the Hindu goddess, Kali, using her eight arms to tackle house-wifely duties including cooking, ironing and cleaning, is featured in Mrs. America. It also included the article ‘Women Tell The Truth About Their Abortions’. In one touching scene, a reader stops Steinem in the street and thanks her for publishing the piece; illustrating how this taboo subject was one that many women felt isolated in experiencing and being able to talk about. 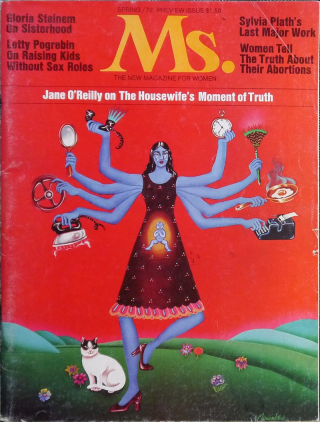 Cover for Spring 1972 edition of Ms. published by Liberty Media for Women, as seen in Mrs. America.

Ms. was a departure from many magazines published at the time that were marketed to women in a bid to help them find a husband, raise children, or wear the right make-up, it “helped to shape contemporary feminism, with…editors and authors translating ‘a movement into a magazine.’”

In a topical twist of fate, when searching editions online, it would seem that the earliest British Library holdings of Ms., from September 1987, feature Tracey Ullman on the front cover – Ullman plays the role of Betty Friedan in Mrs. America. 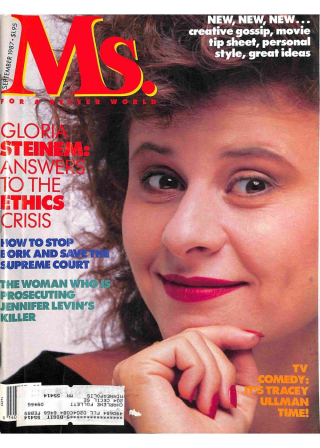 A woman with clear journalistic proficiency and activist vehemence, Mrs. America also touches on the media attention that Steinem’s appearance gained her: ‘the real Steinem has expressed exasperation with the way media coverage centered [sic] on her looks and style.’ A frustrating and ironic state of affairs considering the exact points Steinem and her fellow activists were making in their campaigns. This LA Times article examines this point in more detail, and how accurate Mrs. America’s’ portrayal of Gloria Steinem is (or isn’t). Steinem was not involved in the portrayal of herself in the FX series and discusses what Mrs. America gets ‘hopelessly wrong’ in this article. In particular, Steinem notes: ‘I’m very disturbed that people may look at Mrs. America and feel that women are our own worst enemies. Because even when we disagree, we don’t have the power to be our own worst enemies.’

Works by Bella Abzug and Shirley Chisholm can be seen in part one of this blog pairing. And don’t forget that Unfinished Business: The Fight for Women’s Rights, the next major British Library exhibition, while on hold for now, will be opening later in 2020.

Further reading in the Library collections which speak to the subjects/characters in Mrs. America

Available as an online resource