One of the programmes I’ve managed to binge-watch my way through during the past few weeks is Mrs. America: an FX mini-series (currently available on BBC iPlayer) with a blockbuster feel starring Uzo Aduba, Elizabeth Banks, Cate Blanchett and Rose Byrne, to name a few.

The show depicts the battle between the feminists rallying to ratify the Equal Rights Amendment in America during the 1970s, and conservative activist Phyllis Schlafly who leads the fight against the Amendment’s passing. This two-part blog looks at some of the characters from the programme and the items they authored which are available in the British Library collections.

The airing of Mrs. America comes at a very timely point for Library colleagues – many of whom have been working tirelessly for months and years before lockdown, and continue to do so, on our next major exhibition Unfinished Business: The Fight for Women’s Rights. The exhibition was due to open in April 2020 but is currently on hold until later in the year. From bodily autonomy and the right to education, to self-expression and protest, the exhibition will examine how feminist activism in the UK has its roots in the complex history of women’s rights. A number of Mrs. America’s themes and conversations speak to those explored in the exhibition. The closing notes of the series bring the conversation to present-day America (Virginia ratified the ERA as recently as January 2020) implying, in the same way as the Library exhibition’s name affirms, that these debates are ongoing and far from settled: the fight for women’s rights is indeed unfinished business.

The nine-part series focuses each episode on key players in the US second-wave feminism movement , and the battles that were waged by the movements’ opposing parties. Tackling issues such as reproductive rights, equal pay and girls’ education, ‘the fight to ratify the Equal Rights Amendment (ERA) in the United States was one of the most conflict laden.’

Some of the show’s characters I was familiar with, but many names were new to me and I wanted to find out more. Watchers of the programme will know that there are numerous pieces of literature referenced or mentioned throughout. Of course, many of us aren’t in the British Library building at the moment and seeing these foundational pieces of text on screen, or even mentioned, made me miss the office – and the collections – even more. Resources that would normally be at one’s fingertips are now slightly harder to reach. Despite the exercising of patience needed when it comes to accessing collection items at the moment, I wanted to have a root around the catalogue to see what holdings there might be that complement the stories of the main protagonists during this unforgettable moment in US history.

The following discoveries served as a wonderful and relevant reminder to me, as I hope they will for you, of what influential items the Library holds and that will available to easily consult for one’s research, inspiration or enjoyment, once a more recognisable version of reality greets us once again.

Please note that images in this article have been retrieved from online sources as I have been unable to access and photograph Library collections. Therefore there may be some discrepancy in what the Library’s holdings look like in comparison to the items pictured in this blog.

‘This woman's place is in the House—the House of Representatives.’ Bella Abzug’s bold 1971 campaign slogan declared that she was a force to be reckoned with. U.S. Representative, attorney, peace activist and gay-rights supporter, Abzug helped to advance the role of women in US politics. In 1961, Abzug co-founded the women's peace activist group, Women Strike for Peace, and during the 60s and 70s she was active in the peace movement, vehemently against the testing of nuclear weapons. Her fighting spirit and passion earnt her the nickname Battling Bella. Abzug was an early supporter of the National Organization for Women (NOW) and remained active in feminist issues until her death in 1998.

The Library holds a first edition of Bella! Ms. Abzug goes to Washington (shelfmark: 72/4051X) written by Abzug and edited by Mel Ziegler. The title was published in 1972 by Saturday Review Press – the publishing company branch of Saturday Review, which was, in contrast to this book’s subject, an American weekly men's lifestyle and health magazine, established in 1924. As the name implies, the book traces New York-born Bella Abzug’s journey to politics. The dust jacket shows her signature hat-wearing appearance in silhouette form, with her charismatic grin on the back cover – something Margo Martindale portrays brilliantly, along with Abzug’s ‘pugnacious wit’, in Mrs. America. 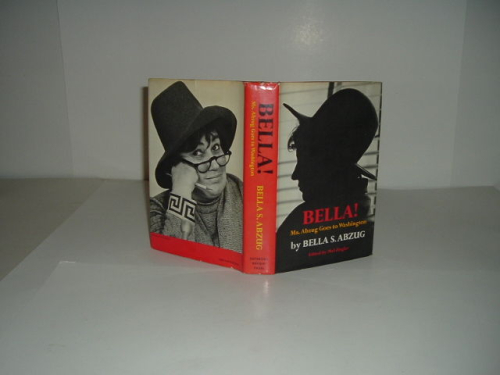 Episode 7 focuses on Abzug as she is tasked with organising the National Women’s Conference in Houston following her failed run for Senate in 1977. Abzug would later be dismissed by President Carter as co‐chairman of his National Advisory Committee on Women after a heated discussion on women’s issues at the White House. In the TV show, members of Abzug’s committee resign in solidarity with Bella; making for a powerful and pertinent scene (and one of my favourites). Did this really happen? This article examines the fact vs fiction in Mrs. America and the reality behind this particularly event, one which Gloria Steinem referred to as ‘the Friday afternoon massacre.’

The first Black woman elected to the United States Congress in 1968, Shirley Chisholm represented New York's 12th congressional district for seven terms from 1969 to 1983. Chisholm was also the first woman and African American to seek the nomination for president of the United States from one of the two major political parties. ‘Unbossed and unbought’ was her motto, showing her outspoken advocacy for both women and minority groups. In this Washington Post article, Vanessa Williams explores how Chisholm “described herself as ‘the people’s politician,’ fighting for higher wages for working people and more money for public education and demanding respect for black Americans and women.”

The Library holds a first edition of Chisholm’s 1970 autobiography, which took its name from her slogan: Unbought and Unbossed (Boston: Houghton Mifflin, 1970, shelfmark: W44/9078). In the book, Chisholm writes about her life, growing up as a young girl in Brooklyn, through her journey into politics, and her experiences of the American political system. It examines her long political struggle and the problems which plagued the American system of government. 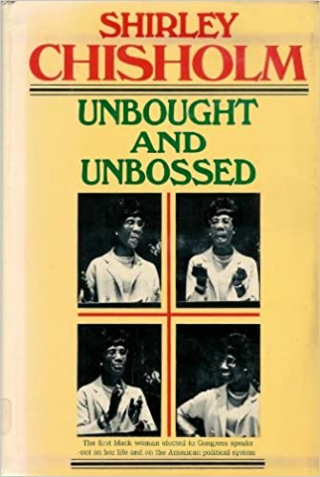 Episode 3 of Mrs. America focuses on Chisholm as the congresswoman and presidential candidate vows to stay in the race for nomination come the 1972 Democratic National Convention. She is a recurring character and steadfast force, and through her story the series ‘points out how the obstacles Chisholm face[d] as a liberal black woman differ[ed] from those facing the white co-founders of the National Women’s Political Caucus.’ This recent Washington Post article includes a fascinating interview with Uzo Aduba, who plays the iconic role of Chisholm.