Paradise in London: the Paraíso School of Samba and the beginnings of urban Brazilian carnival in Rio de Janeiro

One event that is certainly going to be missed this summer is the Notting Hill Carnival. To avoid mass gatherings during the Covid-19 crisis, this year’s carnival takes place online. Usually on this weekend, the streets of west London become alive with the vibrant colours and sounds of costumes, steel bands and floats. The European & Americas Collections Team celebrates this popular London event with a joint blog.

Initially, Trinidad-born activist and West Indian Gazette founder Claudia Jones started an annual indoor Caribbean carnival in response to the racist violence and riots that swept through Britain in the summer of 1958. The first London Caribbean carnival took place in January 1959 and was televised by the BBC, subtitled ‘A people's art is the genesis of their freedom’. The British Library holds a copy of a West Indian Gazette special edition about the event: 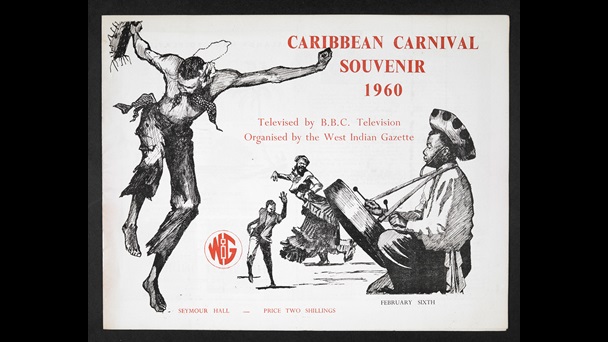 You can find out more about these beginnings at: https://www.bl.uk/collection-items/claudia-jones-caribbean-carnival-souvenir-programme-1960. In 1966 carnival finally took to the streets in Notting Hill and has stayed there ever since. For three days, music and dance now bring together two million people in celebration of Caribbean cultures.

My own initiation to the Notting Hill Carnival has been through Brazilian influence and close involvement with the Paraíso School of Samba, the most prominent school of Brazilian samba in London. Every year since its foundation in 2001, Paraíso has taken part in the Notting Hill Carnival parade, featuring costumed percussionists, dancers, and carnival floats.  Just like in Rio! 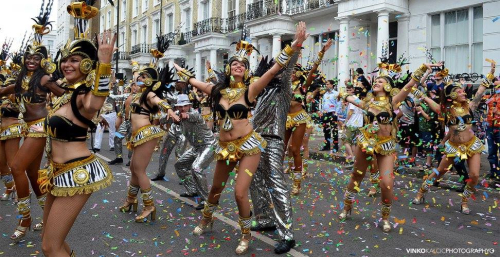 The president and founder of the Paraíso School of Samba, Henrique da Silva has since the age of eight been involved with one of Rio’s most traditional schools of samba: Grêmio Recreativo Escola de Samba Estação Primeira de Mangueira or simply Mangueira. This inspired him to form a samba school in London following the same principles. The main idea of Paraíso is for people to celebrate and express their cultural identity through dance and music. To quote from Paraíso’s website  ‘samba is truly the popular art of people, especially in its inclusivity where everyone has a place. Paraíso plays samba as it is played by the baterias (percussions) of Rio’s samba schools.’

Samba music and dance originate from the Northeast of Brazil, where it was developed from the musical traditions of the African slaves. The style of Samba as we know it today, developed in the first half of the 20th century in Brazil’s urbanising Southeast, mostly its then cultural centre Rio. The style emphasises the polyrhythmic sounds of multiple percussion instruments, like African drumming music, which uses call and response.  This has become the pulsing sound of Rio’s modern carnival. The main driving force behind this style of samba were and still are organized groups known as escolas de samba (samba schools).  They are devoted to playing and dancing, as well as preparing for a yearly carnival parade. In Rio, samba is now inseparable from the Carnival. 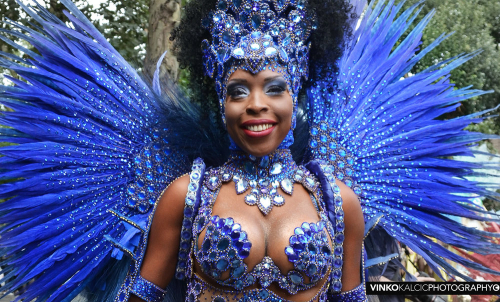 My initial reaction to co-writing this blog was reluctance, as I have mostly stayed away from carnival on my visits to Brazil. Looking after the Latin American Collections, however, I felt I should give it a go and was rewarded with joyful browsing and listening on the internet for a couple of hours. I hope you’ll do the same for this year’s Notting Hill Carnival until we can take to the streets once more.

Our guide to the first decades of urban Rio carnival is Brazil’s most famous composer Heitor Villa-Lobos (1887-1959), a keen participant in his hometown’s carnival celebrations. During his lifetime, modern urban carnival developed and he knew its local protagonists and different musical traditions like no other person. In his own classical compositions, Villa-Lobos sought inspiration in the country’s popular cultural traditions to create a distinctive Brazilian style of music. He even composed two pieces of music on the theme of children’s experience of carnival: Carnaval das Crianças (Children’s Carnival) in 1919 and Momoprecoce (the precocious king of carnival) in 1928. The first, a work for piano describes in eight vignettes well-known carnival figures popular at the time like the diabinho (little devil) or the rei momo (king of carnival). The later work reinterprets and elaborates these themes into an orchestral work with solo piano.

Vanessa Rodrigues Cunha (2015) describes the different musical traditions from which samba emerges as predominant by the end of the 1920s. The music played at the time was slower, however, than the samba we know from later Brazilian carnival, which also developed different dance routines. A good way to experience the greatest musicians of the early time of urban carnival is through browsing the recent digital exhibition Native Brazilian Music: 80th anniversary: the history behind one of Brazilian music’s most iconic albums. 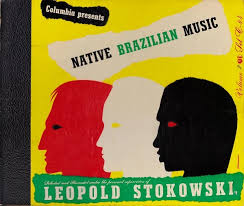 Cover of the record ‘Native Brazilian Music’ by Colombia Records, Museu de Villa-Lobos, as reproduced in the digital exhibition

It tells the incredible story behind the famous recordings of Brazilian popular music organised by Villa-Lobos and Donga for the British composer Leopold Stokowski. His tour through Latin America was part of U.S. president Roosevelt’s ‘Good Neighbor policy’ and Stokowski had asked Villa-Lobos for help in finding Brazilian musicians for recordings. These took place in 1940 on board the steamship U.S.S. Uruguay in Rio’s harbour and would be released by Colombia Records in 1942. The exhibition contains some recordings, which give a good flavour of the musical style of the time. It is refreshing to hear them and you can see how they compare to the musical offerings of Notting Hill Carnival Online.

At the end of the weekend, you can sit down to listen to Villa-Lobos’ reinterpretation of the carnival theme with a recording (25 min) of his ‘Momoprecoce’ performed at the Proms in 2012 by the São Paulo Symphony Orchestra with Nelson Freire at the piano and conducted by Marin Alsop. The recording includes a brief introduction to the piece by Alsop, and I could hear it over and over again. I’m sure that a weekend immersed in Caribbean carnival music will only enhance our appreciation of this wonderful ode to carnival!

In the absence of access to our physical collection items, Vanessa Rodgrigues Cunha’s dissertation has been an invaluable, well-written guide to information on Villa-Lobos carnival pieces and the beginnings of urban Rio carnival:

Daniella Thompson’s research for ‘Stalking Stokowski’ (2000) http://daniellathompson.com/Texts/Stokowski/Stalking_Stokowski.htm underpins the digital exhibition on the record ‘Native Brazilian Music’ and gives a more detailed account of its history and the marginalization of black musicians as samba goes mainstream.

Posted by Annalisa Ricciardi at 2:10 PM