September 14th 2020 marks the start of Te Wiki o te Reo Māori (Māori Language Week): the annual celebration of a pivotal moment in the revitalisation of the language in Aotearoa/New Zealand. In this post, we look at the journey of te reo Māori (the Māori language) following the arrival of Europeans in the 19th century, and hear from Scott Ratima Nolan, a member of staff here at the British Library, about his own relationship with te reo (the language).

The history of te reo, considered so sacred in Māori culture that it now has protection under the Treaty of Waitangi, is a tale of highs and lows. Before the 19th century, te reo Māori was predominately a spoken language, with meaning and information also communicated through symbols and patterns embedded in crafts such as weaving and carvings. Te reo (the language) developed as a written form in the beginning of the 19th century with the arrival of Christian missionaries, and dominated the early years of publishing in Aotearoa. The first books printed in the country were written in te reo: extracts from the Bible printed on the missionary press in the 1830s at Paihia in the country’s North Island. Early Māori language newspapers, such as the government-owned Ko te Karere o Nui Tireni (shelfmark LOU.CMISC67), began publication in the following decade. 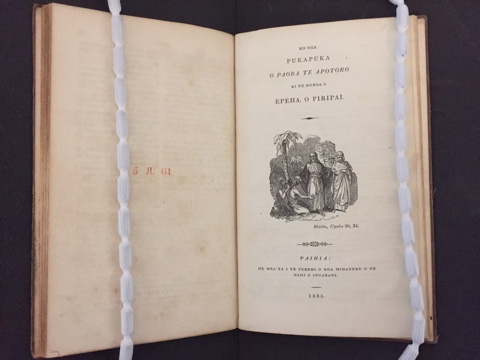 This extract from the Bible in te reo Māori (Epistles to the Ephesians and Philippians, translated by Rev. William Williams) from the Paihia Missionary Press in 1835, is considered the first substantive book printed in Aotearoa/New Zealand. BL shelfmark C.23.a.15.(2.)

Te reo remained the most widely spoken language of Aotearoa during the first half of the 19th century, with Europeans learning the language in order to communicate, trade and convert the Māori population. However, this changed with the increase of settlers arriving in the country, and Europeans emerged as the majority population by the second half of the 19th century. The English language now dominated, forcing assimilation among Māori through suppression of the use of te reo in schools and discouraging its use in public life. Confined to use in the home, te reo Māori became at risk of extinction by the mid-20th century. The Māori language, culture and identity are intricately entwined, with te reo considered taonga (treasure) in Māori culture. Taonga require protection and this prompted a revitalisation of the language in the 1970s. On September 14th 1972, Parliament was called upon to allow te reo to be taught in schools: a place where its use had previously been actively discouraged, and often forbidden. Language recovery programmes began in earnest and te reo Māori became increasingly heard on radio and television, and read in Māori newspapers, magazines and books. Te reo education systems were established including Kōhanga reo and Kura kaupapa which immersed students in Māori language and culture. Following a successful language claim under the Treaty of Waitangi which argued that, as a taonga, the language deserved protection, te reo Māori was made an official language of Aotearoa/New Zealand through the Māori Language Act in 1987. The Māori Language Commission (Te Taura Whiri i te Reo Māori), was set up in the same year to promote the language, and published guides such as Māori for the office = Te reo Māori mō te tari (shelfmark YK.2000.a.5008) and Te Matatiki  contemporary Māori words (shelfmark YK.1996.a.20438) to promote use of te reo in daily life. 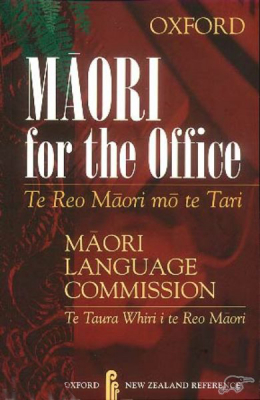 Guides such as this one were published by the Māori Language Commission in the 1990s to encourage the use of te reo in every day life. BL shelfmark YK.2000.a.5008

The Commission also exists to expand the language, and they have recently developed Māori terminology for a very serious 21st century situation: COVID-19. New terms to enter the Māori language this year to support the fight against COVID-19 include:

The aim is for Aotearoa to eventually become a bi-lingual country, and while Te Wiki o te Reo Māori (Māori Language Week) celebrates that crucial moment in the trajectory of te reo in 1972, it also acts a source of inspiration and encouragement for all New Zealanders to connect or re-connect with te reo Māori. In doing so, they help safeguard a language deeply woven into their country’s history and identity. Te reo Māori is also safeguarded outside Aotearoa through diaspora communities, including here in the UK. The Ngāti Rānana London Māori Club keep the Māori culture and language strong and proud in New Zealanders living in London and the rest of the UK. Ngāti Rānana also meet to learn, practise and share knowledge of kapa haka: traditional performing arts. Anyone with an interest in Māori culture is welcome at their regular gatherings at the New Zealand High Commission in London (moved online during COVID-19).

Although the British Library is the national library of the UK, our staff are international and have personal connections to countries, languages and cultures all over the world. In the story below, Conservation Support Assistant, Scott Ratima Nolan, explains his own relationship with te reo Māori.

It hasn’t been easy to write about being tangata whenua: being Māori here in the UK. When I think about Aotearoa, the land I call home, it is a strong wrench. The ties of a thousand flaxen cords are interwoven with both Pasifika and Pākehā (White NZ) threads, bound with the hands of ancestors known, and (to my shame) unknown. Ever does it pull; He taura here whenua. Such are the ties that bind.

Growing up in South Auckland, that North Island city of effervescent Polynesian culture, I was wrapped in the warmth of my whānau and a proud people. My father, a man as gifted as Herodotus in blending truth and fiction, maintained my first language was te reo Māori. While this is debatable, I certainly was strong in my tikanga (custom or practice); the first flag I ever knew was the United Tribes of New Zealand. I remember my visit to the Auckland War Museum as a child, where I was moved to tears in seeing the taonga, the treasures of my people, on display. It resolved me, even then, to become a Kaitiaki: a custodian. And, emblematic of my own shared bloodlines, caring for the heritage and the taonga of not just my own, but many cultures.

Now, as any reproachful teenager would tell you, growing up is hard. And in moving to the South Island of New Zealand, I was confronted by another culture: that of the South Island Pākehā. My school had no legitimate te reo course. Culture was limited to theatre and musicals. Speaking te reo out loud was looked down on. In history, we spent an entire term on the Irish Civil War, but knew next to nothing on the New Zealand Wars, the Treaty of Waitangi and Māori land confiscation. Frustratingly, both teachers and my fellow students were aghast at my claims to be ‘native’. I looked like them; why would I want to be any different? In a grand spectacle of Pākehā dominance, in front of what seemed to be the entire school, my Principal forced me to remove my Pounamu, a sacred greenstone (which my father had forbidden me to remove), from around my neck. The trenches and palisades of my cultural pride and resistance were assaulted and hewn down into the cold embrace of southern conformity.  And, while I rebuilt my confidence somewhat over my university years, I had lost a lot of my pride, and my language. There were scars across my heart, and it was with some relief that I left Aotearoa to come to the UK. I hoped I could reconnect with my culture by becoming a Kaitiaki, working with heritage collections.

However, attempting to build a career in heritage institutions here can be a real struggle for BAME and Indigenous peoples. To work in this sector, I found I had to suppress my culture: a necessity for those doors to open. I did this not out of shame over being Māori, but rather the sadness of not being accepted and welcomed here (especially in this sector) as such. And for years since, I railed against those ties that bound me until they diminished. And I stopped my ears to the whispers of my tīpuna (ancestors) who know me as Māori until they quietened. I even stopped using what te reo I knew, because I had grown up understanding that my language was sacred, and I felt I profaned it by using it when I did not honour my people. And thus, I lived, but I lived with a hole in my heart.

But the murder of George Floyd and the Black Lives Matter movement was a real catalyst for me. That hole in my heart cast a long shadow across my soul, and a real despondency overtook me. This despondency rose not just from those events, but also the slow dawning realisation of how much I had given up just to be here to work in a field I had, in ruthless irony, chosen as a place where I could honour my people by being a Kaitiaki, a custodian, to the treasures we hold here.

A taniwha, a guardian spirit that had long lain dormant inside me, had awoken, and it was hungry for change. And somehow, I gained the strength to put aside fear of exclusion, embarrassment or castigation, to speak up and identify myself as Māori.  And I found a workplace that is incredibly supportive and responsive to the BLM movement, and is taking steps to become more inclusive: to accept me as I am. In a matter of weeks, I was working alongside others on the Front Hall busts reinterpretation, which, in redressing some of our collection legacies, has restored Mana to both my people and the British Library.

So, in this year’s Te Wiki o te Reo Māori, I’m celebrating my rebirth. I’m Māori, and I’m proud. I take courage from the very language itself, which at one point faced extinction and has come back so strong. Te reo Māori is an essential part of my culture, and I’ve made it my resolution to relearn it. I’m starting now, haltingly, to use the words of my people in every day speech and in email, to celebrate and share my culture, and to reach out to my friends back home in Aotearoa: to not only kōrero (talk), but also to whakarongo, (listen).

And every word I speak tears down another brick in the walls I have built up, filling the hole in my heart. And at long last I can hear my ancestors again.

Aotearoa: ‘The Land of the Long White Cloud’ the Māori name for New Zealand

Kaitiaki: Guardian or a custodian, someone who works to protect and safeguard

Pasifika: Peoples of the Pacific or of Pacific Island descent, who call Aotearoa home

Tangata whenua: ‘The People of the Land’ how we as Māori often refer to ourselves; the indigenous inhabitants of this land

Taniwha: a Mythological being, often found in water. They can be Kaitiaki (guardians) or monsters punishing those that breached tikanga (custom)

Taonga: the treasures, artefacts or resources that are considered of great value, including our language

Tikanga: the customs, culture, etiquette and practices of being Māori

Tīpuna: alternatively spelled as tupuna, this refers to Ancestors and grandparents