In the mid-century United States, the newsroom was at the heart of journalism’s professional world, the place where reporters and editors produced and published stories that shaped their society, and their own. In their numerous depictions on stage and screen, newsrooms have been romanticized and idealized, but they were very human places, complete with the failures and foibles of the cultures they were embedded in.

They could be macho, sexist and racist places, where white men dominated. They could be places where publishers and owners demurred too much to corporate or political interests.

But they were also spaces where true stories—however imperfect—were told to people in power, and, gradually, were becoming more open to women and people of color by the 1960s.

Cartoonists and other artists, working in newsrooms, captured and caricatured their working lives, including their colleagues, in these places. What follows is a small sample of the images I have gathered in my research for my new book on the history of the American newsroom from the 1920s through the end of the 1950s, to be published with the University of Missouri Press early next summer. I’ll describe what’s happening in each image and provide further context.

Note: several of the images below come from a trade publication, Editor & Publisher (the equivalent in the UK would be the Press Gazette), which can be found in the British Library’s holdings at the following shelfmarks: Document Supply 3661.077000 or the General Reference Collection, PP.1423.lgt.

The British Library holds an extensive collection of historical and current newspapers and magazines published in the United States. All of them can be accessed via the Explore catalogue. An Eccles Centre guide to the Library's printed and microfilm holdings is available here (https://blogs.bl.uk/files/british-library-newspapers-us-canadian-holdings.pdf). The guide lists the newspapers by title and provides an index to available holdings by state and town. In addition to these printed and microfilm materials, the Library subscribes to several online databases containing full text searchable newspapers and magazines. The blog post Americas Digital Newspapers Resources, provides more information on digital newspaper databases, many of which are available remotely once you obtain a British Library reader pass. 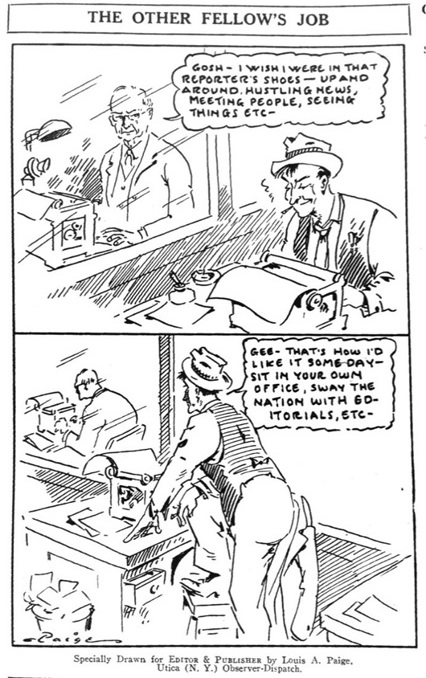 In this first image from Editor & Publisher and published on April 18, 1936, Louis Paige, a cartoonist at the Utica, New York, Observer-Dispatch, shows a columnist typing away behind an office partition in a newsroom, with a younger reporter working out in what is implied to be the open newsroom. The older columnist says, “Gosh -- I wish I were in that reporter's shoes -- up and around hustling news, meeting people, seeing things, etc. --.”

The second part of the cartoon shows the unnamed younger reporter looking into the office, on the columnist, and saying, wistfully, “Gee -- That's how I'd like it some-day -- sit in your own office, sway the nation with editorials, etc.”

While more touching than tongue-in-check, this scene gently teases news workers for envying each other’s jobs. For many rank-and-file reporters, working as a columnist seemed like a pretty easy gig. After all, columnists could stay inside and work at a more leisurely pace, but columnists, for their part, missed the carefree semi-independence of their younger days as reporters. 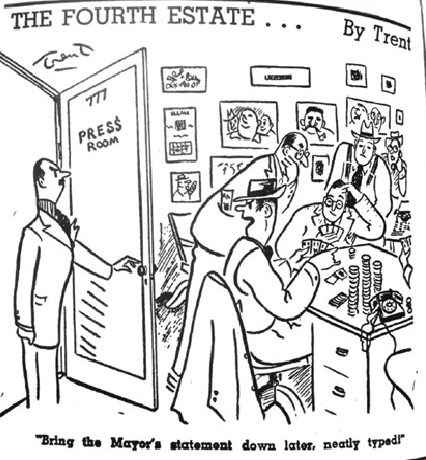 In this image, a group of reporters are playing a game of cards in a “press room” located in a city building. A flummoxed functionary is seen opening the door on them, and one reporter turns and says, “Bring the Mayor’s statement down later, neatly typed!

This cartoon, published in Editor & Publisher on March 27, 1948, shows how reporters spent their time between assignments, or even on assignments, and what they thought of local government officials. 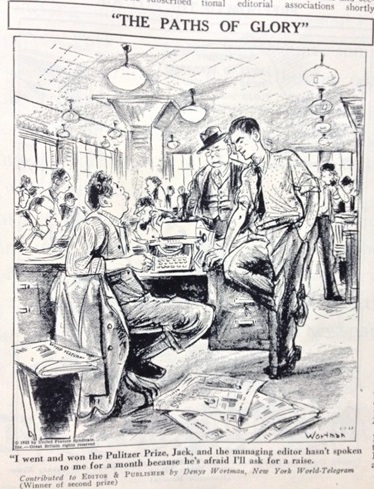 In this image, a cartoon by Denys Wortman, of the New York World-Telegram, a brash young reporter is complaining to a coworker about his editor. He says, leaning casually against a table, “I went and won the Pulitzer Prize, Jack, and the managing editor hasn’t spoken to me for a month because he’s afraid I’ll ask for a raise.” Published on April 21, 1934, in Editor & Publisher, it spoofs the constant clamoring for raises that American editors faced, but also the harsh reality of the Great Depression, where winning a major journalistic award was not enough to guarantee a pay bump. 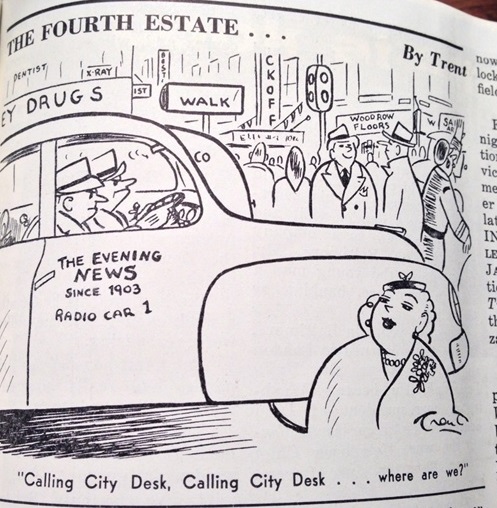 In this cartoon from Feb. 18, 1956, and published in Editor & Publisher, a couple of reporters in a “radio car”—a car equipped with an expensive, two-way radio system for calling stories into the newsroom, or receiving instructions from editors—is shown on a busy city street. Both reporters appear grumpy, and one is saying into a microphone, not visible, but probably on the dashboard, “Calling City Desk, calling City Desk … where are we?.” 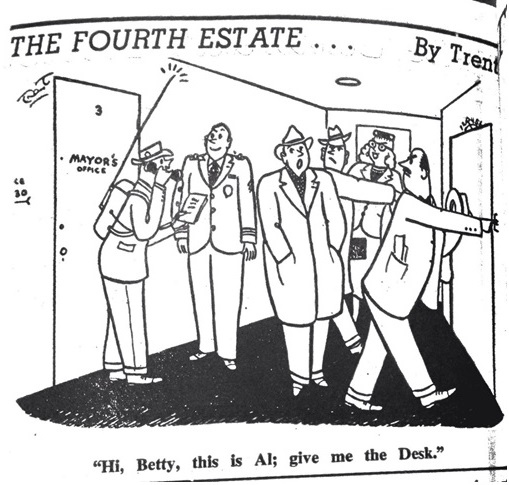 In this cartoon, a reporter with a radio strapped to his back with a long antennae, is busy cornering interview subjects in a hallway in a city hall building, and is saying into a receiver, “Hi, Betty, this is Al; give me the Desk.” The image, published in Editor & Publisher on Sept. 19, 1953, both pokes fun at the new portable technologies possible in the postwar world, but also takes, perhaps, a subtle pride in how they’re changing journalism. 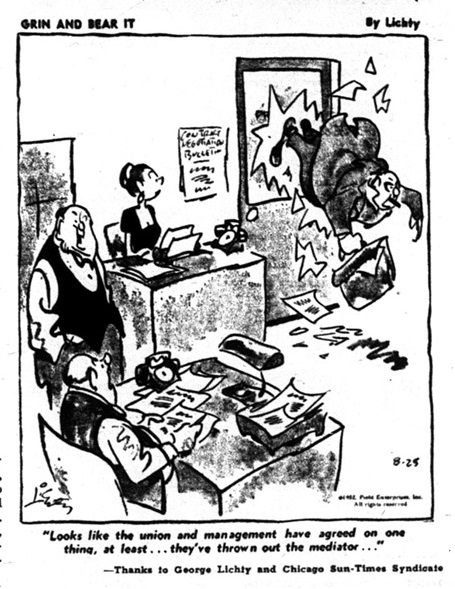 This final image, published on Sept. 26, 1952, in The Guild Reporter, a publication of the American Newspaper Guild (ANG), shows a labor negotiator being tossed forcibility through a glass window, in a door. A receptionist and two male editors look on. One says, “Looks like the union and management have agreed on one thing, at least…they’ve thrown out the mediator…”. The cartoonist, George Lichty, drew the image for the Chicago Sun-Times Syndicate. While it exaggerates, of course, it does show how the unionization efforts of the ANG had helped journalism, at least partially, become a more white-collar occupation.