Waitangi Day marks the anniversary of the signing of te Tiriti o Waitangi (the Treaty of Waitangi) by representatives of the British Crown and Rangatira (Māori chiefs) at Waitangi on 6th February 1840. The treaty, drafted by the governor, William Hobson, was translated from English into te reo Māori (the Māori language) by the Christian missionary, Rev. Henry Williams with help from his son, Edward. This version was used to outline the agreement to Rangatira and gather signatures around the country, but it was not an exact translation of the English document. The result was two treaties with significantly different interpretations; the English version asserting the sovereignty of the Crown, and the reo Māori version retaining the full authority of the chiefs, an authority previously affirmed in the Declaration of Independence document of 1835. 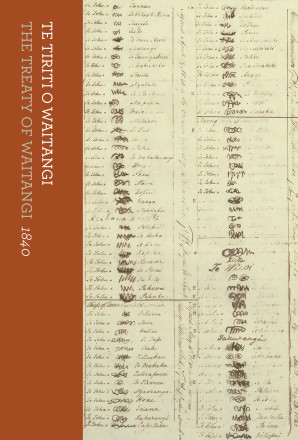 Whilst the treaty documents officially confirmed European settlement in Aoteaora New Zealand, the exact meaning and intentions of the treaty text has since been fiercely debated. In 2014, the Waitangi Tribunal, set up to mediate the differences between the two texts, found that the Rangatira who signed te Tiriti o Waitangi in February 1840 did not cede sovereignty to the British Crown, but did agree to share power through different roles. The tribunal ruled that the Crown has the right to govern (kāwanatanga), subject to the protection of Māori interests (rangatiratanga). This ruling is not universally accepted in Aotearoa New Zealand, and public commemorations on Waitangi Day are often when this dispute is brought firmly into the spotlight. 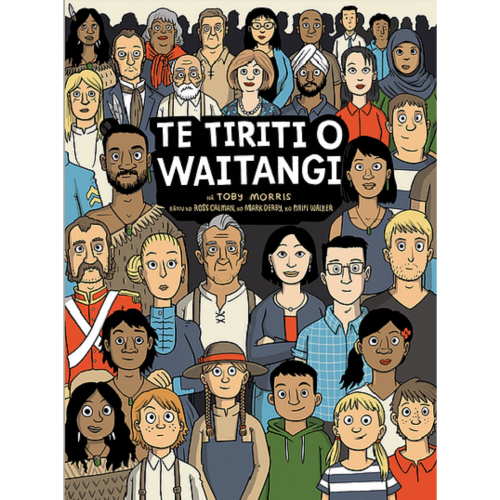 A dual language graphic novel-style book for children on the Treaty of Waitangi. Shelfmark YD.2019.b.1189

Lucy: The dual language book pictured above is an example of the resources now used in schools to teach children about the events that led to the signing of Te Tiriti o Waitangi, and what has happened since. What are your memories of Waitangi Day when you were growing up in Aotearoa New Zealand?

Scott: It was quite difficult to be Māori growing up in Aotearoa New Zealand, particularly in the South Island. The media tend to portray the day as ‘rogue’ elements of Māori ruining a lovely sunny day by harassing the terrified politicians running the gauntlet to Te Tii Marae at Waitangi [the sacred Māori meeting ground at Waitangi - politicians are usually invited here on Waitangi Day]. Growing up, the first flag I ever knew was the United Tribes of New Zealand flag and, as a (reputed) descendant of Wiremu Tamihana Tarapipipi Te Waharoa (the ‘Kingmaker’), the affirmation of the Kīngitanga [Māori King] movement. But when I moved to a rural area of the South Island, I found that my Pākehā friends and classmates inherited and perpetuated their parents' fear and anger that Māori were going to ‘claim their land back’.

Combined with a lack of teaching in school around the Treaty and the New Zealand Wars, in many areas that has led to a continuation of the same attitudes towards Māori. I learned swiftly that we were, and often still are, seen as second-class citizens in our own land. But while restitution is a part of the Waitangi Tribunal process, for me it is about establishing Māori as equal partners to the Crown; to regain the equality with Pākehā which our ancestors never gave away. This graphic novel superbly illustrates what I feel is the best part of Aotearoa New Zealand; the combination of both Māori and Pākehā working together in both languages, educating us all on the importance, but also effects, of our founding document. As the book says on page 15, “If we are honest about our country’s past, we can try to fix some of the damage that still affects us today”. 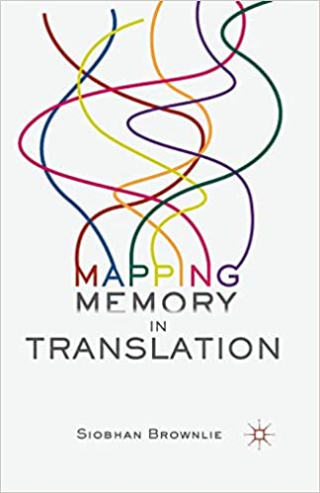 This book on translation uses the Treaty of Waitangi as a case study. Shelfmark ELD.DS.299497 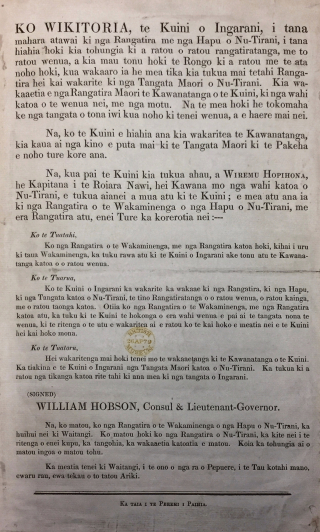 Lucy: The Treaty of Waitangi is often used as a case study, as in the title above, to explore the role of cultural memory and worldviews in translation studies. The Library looks after this 1845 printed handbill of te Tiriti o Waitangi in te reo Māori and you can see the disputed terms, kāwanatanga and rangatiratanga there in articles 1 and 2 (paragraphs 4 and 5). These are the most significant examples of where the translation from English to te reo Māori led to different interpretations of the treaty.  What meaning does this item hold for you?

Scott:  It’s a good reminder of what many New Zealanders, even today, still struggle to understand; that while it is one document, there are two versions of Te Tiriti [The Treaty]. This is an issue which has been at the heart of race relations and the struggle to preserve not only our heritage, our whenua [land] but also ourselves as a people from Pākehā [non-Māori] assimilation. Here in the handbill, the te reo version of the treaty which most Rangatira, or chiefs, signed on February 6th 1840, allowed the British government over the land by having a governor who could rein in the settlers which had been troublesome to Māori. My ancestors also wanted the protection of the British from possible French incursion, but most importantly, while keeping their own sovereignty; their Mana [authority, prestige and spiritual power] and land.

At the urging of missionaries, Māori signed the te reo version in good faith, assured that we could keep our lands, freedom and way of life. But the British utilised the mostly unsigned English version, which ceded sovereignty to the Queen and led to the horrific New Zealand Wars, mass land confiscation as punishment for ‘rebellion’, and the suppression of Māori way of life and tikanga [customs]. Whether the change in language was deliberate or not is debatable. However, I grew up in a household which regarded Te Tiriti as one of the great con-jobs of history, a Trojan horse of trauma and devastation disguised as friendship. 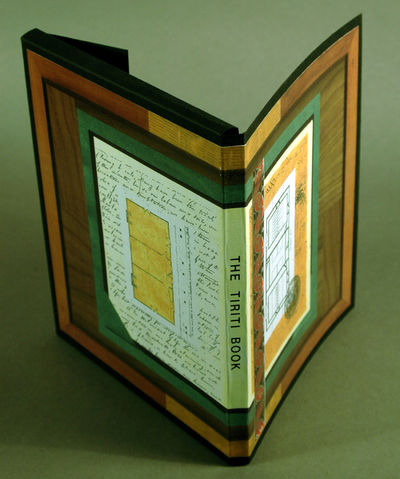 The Tiriti Book by Vanya Steiner. A contemporary artists' book on the Treaty of Waitangi. Awaiting shelfmark 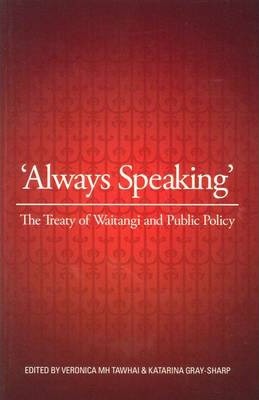 The Library holds academic monographs, such as this one, which explore the role of the Treaty of Waitangi in public life. YD.2012.a.5143

Lucy: The Library also holds a contemporary artists’ book, pictured above, which considers the bicultural aspect of the Treaty of Waitangi by combining design elements, images from Treaty documents, the Treaty House plans, and Māori and British illustrations from historical documentation in such a way that they become entangled and the distinctions blurred. This blending of cultures is similarly explored in books such as Always Speaking, pictured above, which interrogates the role of the Treaty in everyday life and public policies including broadcasting, housing, maternity care, youth services and the electoral system. How do you embody the Treaty in your everyday life?

Scott: On the basis of the Treaty, Aotearoa New Zealand is a bicultural society, though this sits uncomfortably with many Pākehā.  Much in the way the artists’ book blends both Totara [a type of Aotearoa New Zealand wood] and Oak together, the two strongest materials from our cultures, the combination of the two peoples, positively, respectfully and equally is the way forward for us as a nation. For years, the government has acknowledged failure in providing the key concepts of protection, participation and partnership to Māori, but I do believe we are taking slow steps forward. As Tangata whenua, as Māori, I choose to embody the treaty by embracing and celebrating my Māori culture as part of my mixed heritage, to choose to live in te ao Māori [the Māori world]. This was a fairly recent decision after reflecting on the impact 2020 Black Lives Matter movement on myself, as well as so many others.

So now, here in the home of Cook and Banks, and the launching point of some 10,000 soldiers that marched under guns through the Waikato in the New Zealand Wars, I undertake to embody the Treaty by being openly and proudly Māori; utilising my basic understanding of te reo in my emails and in my work. And committing to that partnership with the Crown as equals by exploring how aspects of my culture, such as our view on Kaitiakitanga [holistic guardianship], can be applied here within the British Library for all our future generations. 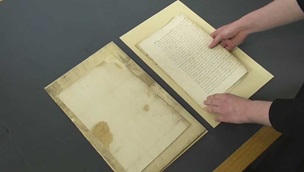 Lucy: Your role at the Library involves training users in the handling and care of collection items. How would the principles of Kaitiakitanga apply to the stewardship of the Treaty of Waitangi handbill, for example, in the Library’s collection?

Scott: For an item such as the 1845 handbill, active and inclusive custodianship would mean that this material would be seen as a taonga, or treasure, to be kept safe. Effective and inclusive custodianship of such a key item in the joining of both Māori and Pākehā cultures is important. It has immense significance for those who may wish to understand not only the differences in language and meaning that led to the horrors that we as Māori had to endure, but also the ‘spirit’ of the treaty, the joining of two cultures, which is especially significant for someone like myself, a blend of both Māori and Pākehā bloodlines.

Custodianship, or kaitiakitanga, fits within the ideals that we already have here at the British Library.  We work to ensure such culturally significant material from our past, is preserved in the present for our future generations. Even though the handbill itself hasn’t come forth from my people, or our whenua [land], the fact that it is in te reo, our language, which is regarded as sacred, means it must be handled with active respect for its status, as well as its own mauri [life-force].

Robert Consedine & Joanna Consedine, Healing our history : the challenge of the Treaty of Waitangi (Auckland 2012) YD.2012.a.4861

Patrick A. McAllister, National days and the politics of indigenous and local identities in Australia and New Zealand (Durham, N.C. 2012) m13/.12015

Dominic O'Sullivan, Beyond biculturalism : the politics of an indigenous minority (Wellington 2007) YD.2007.a.8667