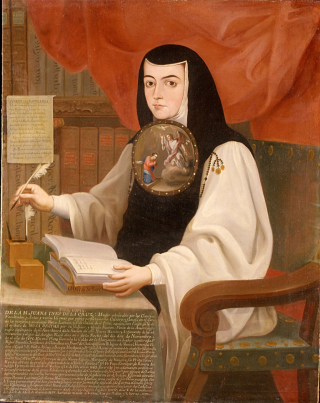 Sor Juana Inés de la Cruz was born near Mexico City, the most glorious city in the Americas, in 1651. (Paula Findlen points out that whereas the Jesuit polymath Athanasius Kircher wrote about the pyramids of the Egyptians, Sor Juana could see Aztec pyramids out of the window.) She was a swotty girl who seems to have had no objection to entering a nunnery, a traditional home for intellectual women in the Middle Ages and early modern period. She was famed for her highly wrought and learned poetry and drama in the style of Góngora, and wrote successfully for the court on festival themes and the cloister on religious themes (including hymns in Nahuatl) until 1693.  She was commissioned to write the text for a Triumphal Arch erected for the entry of Viceroy Marqués de la Laguna in 1680.

Her downfall was caused by her involvement in a pamphlet war.  In 1650 Fr António Vieira SJ wrote a Sermón del mandato.  Sor Juana criticised his biblical scholarship in 1690 in the Carta atenagórica alias Crisis sobre un sermón … (Letter of Athena alias Criticism of a Sermon …).  It was printed without her permission and the elogious title wasn’t hers as it was applied by the man who published it. In 1691 Manuel Fernández de Santa Cruz, Bishop of Puebla, under a female pseudonym, brought out the Letter of Sor Filotea de la Cruz. Sor Filotea was in favour of women’s education at a high level, but thought that to use it in public life was a form of sinful pride.  ‘She’ is in favour of Christian letters but not pagan.

Sor Juana wrote in 1691 the Respuesta de la poetisa a la muy ilustre Sor Filotea de la Cruz.  The reply is about six times the length of the first letter. She includes some striking personal touches: as at the age of 6 or 7 she asked her mother to send her to the new university dressed as a boy (‘mudándome el traje’) but mother said no. Looking back, Sor Juana saw this was the right decision. The child started to work through her grandfather’s library.  She measured her learning by reference to her hair.  She cut her hair, and set herself the target of mastering a certain subject by the time her hair grew back.  But ‘my hair grew fast and my understanding was slow’.  In the convent she was told not to study in books, so she studied things. She says cryptically: ‘if Aristotle had cooked, he would have written much more’. (I assume she’s thinking of Aristotle the scientist, and observer of nature: see Leroy.)

She unleashes a plethora of women, biblical and pagan, who had been poets. (You can see more of these in Jane Stevenson’s book.) Sor Juana agrees that St Paul had bidden women to keep silence in the churches (1 Cor. 14:34), but deduces that this means that women can study and write at home.  And when Paul says men can preach, he means only godly and learned men.  Just as not all men (e.g. Lutherans) should preach, so not all women should be forbidden. Sor Juana addresses the Church’s attitudes to poetry.  The Bible is largely written in poetry, so the objection is to pagan literature.  Sor Juana says pagan literature can be perverted but is not bad in itself. (Humanists had reconciled pagan and Christian literature 100-150 years before.) She agrees with Sor Filotea that Paul put limits on learning for men as well as women when he said (Rom 12:3) ‘non plus sapere quam oportet sapere, sed sapere ad sobrietatem’. (The Vulgate makes this a warning about knowledge, but nowadays it’s taken as a warning against pride: ‘I say to every man that is among you … not to think of himself more highly than he ought, but to think soberly AV; see Ginzburg.) The Church allows women to write, ‘but I do not have the talent to write’ (untrue, and she knew it). She points out that in the Carta she had been critical of Vieira’s biblical scholarship, not of the Bible itself, and concludes: ‘if my critics think the Carta is heretical, they they should report me to the Inquisition’.

In 1693 Sor Juana ceased to write and in 1694 she sold her library to aid the poor.  She died in 1695. In the twentieth century, Américo Castro called her ‘a martyr to intelligence’; Alberto G. Salceda called the Respuesta ‘the Magna Carta of the intellectual liberty of the women of America’. 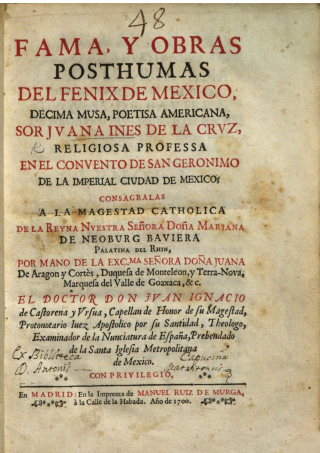 Posted by Americas Team at 9:48 AM