This is the third in a series of blogs coming out of the Eccles Centres’ Caribbean Foodways oral history project. Identifying connections between participants’ stories and collection items, each blog explores one of the nine oral history interviews that will be deposited in the Sound Archive.

This blog is about Charlie Phillips AKA Smokey, the Jamaican-born photographer and restaurateur, who arrived in Liverpool on-board the Reina del Pacifico in 1956 before settling in Notting Hill. This blog focuses on Charlie’s early years in Jamaica and his restaurant, Smokey Joe’s, in Wandsworth, but you will soon be able to listen to his full interview via the British Library’s Listening and Viewing Service.

The marriage of the Jewish classic, chicken soup, with the African, Caribbean and Latin American staple, cassava, all in a humble bowl of goodness, cooked by Charlie’s grandmother, captures traditions of blending and nourishment that are central to Caribbean cooking.1 As Smokey explains, this bowl of soup is part of Jamaica’s ‘hidden history.’ The earliest Jewish presence in Jamaica dates back to 1530, as it became a place of refuge for Jews that were fleeing the Spanish Inquisition. By 1720, 18% of the island’s population were Jewish.2 Whilst the Jewish presence has all but disappeared (there were less than 15 people at a Shabbat service that I attended at Shaare Shalom Synagogue in Kingston, in 2019) some culinary influences have survived. The parallels between Charlie’s description of his grandmother's cooking in the hills of St Mary, Jamaica, and the following excerpt from an interview with Jewish East-ender, Carol Matthews, are striking. From the salting of beef to the pickling of cucumbers, quintessential Jewish flavours and textures – which are themselves the product of multicultural diasporic culinary evolution – formed a nourishing cornerstone of Charlie’s childhood.

‘well … you’ve not had a real meal unless you’ve ‘ad Jewish chicken soup. Now, they call it the penicillin, of the Jewish world, and trust me, you’ve not lived until you’ve ‘ad Jewish chicken soup and lokshen and kneidlach balls … also, I make new green cucumbers, which is basically cucumbers in acetic acid with some spices thrown in and some garlic, salt beef … fabulous fabulous, hot salt beef sandwiches with mustard’

‘Matzo Kleis’, as they are called in this cookbook from 1895, are typically served in a broth – generally chicken soup – for the Jewish festival of Passover. This Jewish dumpling-of-sorts was just one of the many types that Charlie loved to eat as a boy (and still does), from Johnny Cakes to cartwheels. Blanche’s Jamaican twist on matzo balls made with grated cassava, also known as manioc, manihot, yuca and tapioca, points to the multiple roots and routes of Caribbean foodways. 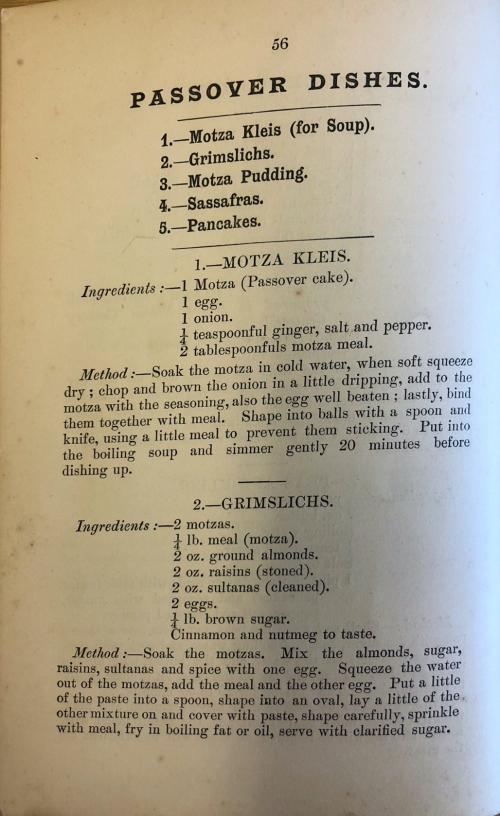 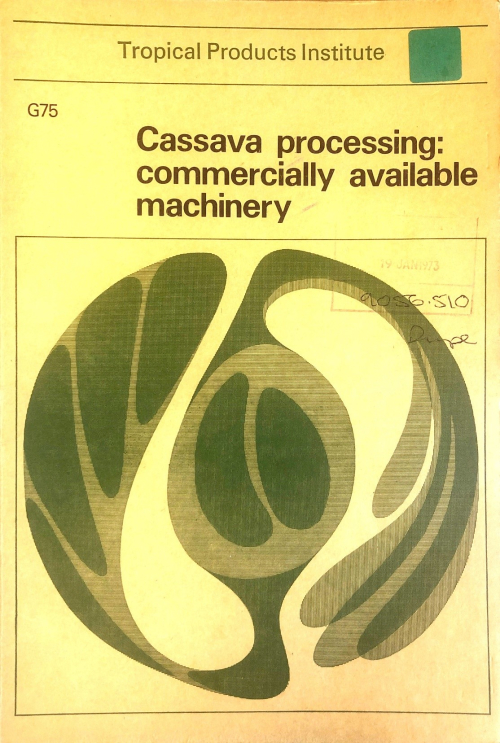 A ‘country boy’, Charlie begrudgingly moved to Kingston aged 10. This is where Smokey’s enterprising character blossomed – he would run ‘last minute errands’ for emigrants leaving Jamaica onboard ships like the SS Ormonde and Reina Del Pacifico; help out higglers in Kingston’s famous Coronation Market; and carry stale bread from the bakery to a fishing village called Greenwich Farm. In these clips, Smokey remembers buying packets of Zephyr cigarettes and pickapeppa sauce for the hopeful voyagers who had learned from earlier sojourners to douse the bland food onboard in hot sauce.

The term ‘higgler’ or ‘higglering’ signifies the ‘informal economic activity of small-scale street vending dating back to the days of slavery, and is dominated by black, lower class Jamaican women.’3 Charlie fondly remembers one higgler in particular, Miss Gladys, who used to look out for him. Much like the higglers that Charlie ran errands for, he was creatively responding to the precarity and poverty that shaped the lives of working-class people in Jamaica. Recalling some of his favourite things to eat as a boy, Charlie describes picking up left over avocados when the market was finished and eating these with bulla – a spiced cake that was made with molasses – that he would get when he collected bread for the fishermen. 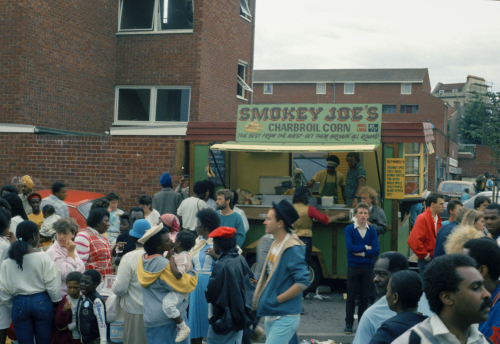 Before Charlie’s family opened Las Palmas, a food ‘shack’ on Portobello Road, which was one of London’s earliest Caribbean eateries, they had an unlicensed cook shop where his stepmother would cook for 15-20 people a day. Cook shops were fairly common in the 1950s and 1960s, offering a slice of home for mostly single men that had settled in the UK. This blurring of private and public space was a pattern that characterised many post-war Caribbean leisure and commercial practices, from blues parties to hair salons. Charlie’s early introduction to the business of selling food, combined with cheffing experience at restaurants like the Grosvenor House Hotel and travelling around Europe, led him to set up his own food stall in the 1970s. He started selling barbequed corn on the cob and became known as liking to ‘smoke up the whole place’, which is how he got his nickname – Smokey Joe. After doing fairs and festivals for some years, Smokey decided to set up a diner in the 1980s. 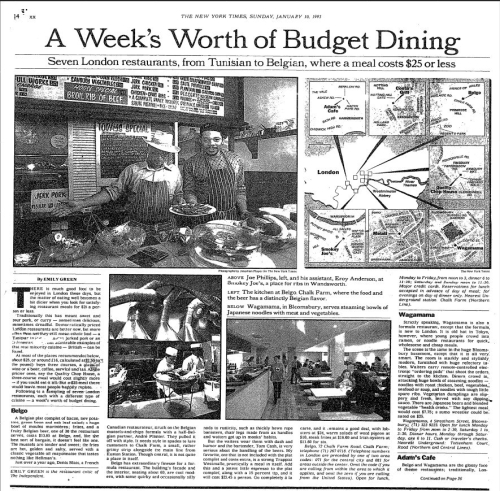 A barbeque-style Jamaican fusion joint, Smokey Joe’s diner was a popular spot. In 1993, the New York Times praised its standout jerk chicken and pork. It was featured alongside the still standing Beigel Bake on Brick Lane (one of Charlie’s favourite spots) and Mangal Ocakbasi in what was then the ‘gritty East End’ where tourists were ‘unlikely’ to venture!4 Smokey Joe’s was a success in spite of the obstacles put up by bank managers that refused to loan Charlie money, who according to him had no understanding of what a Caribbean restaurant was or might become. While there are many more Caribbean food outlets, restaurants, supper clubs etc. across the UK today, there are still gaping inequalities and injustices in the food industry. From a lack of investment, to the whitewashing of recipes, names and décor, processes of racism, othering and exclusion are still very much present in the commercial British food landscape.5 This is why it is so important to highlight ongoing and historic stories of delicious defiance, like Smokey Joe’s! 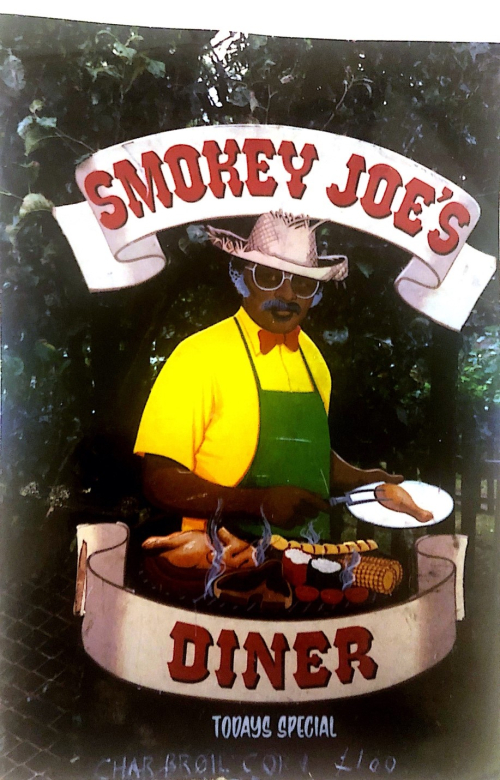 Thank you Charlie Phillips for sharing your memories and thoughts with me.

Read the next blog in the Caribbean Foodways series - Sandra Agard: An Ode to Ridley Road

Read the previous blog in the Caribbean Foodways series - Joe Williams: 'the need for flavour'

5. Riaz Phillips, ‘In The Food Industry, The Odds Have Always Been Stacked Against Black People’, Resy, 12 June 2021

Posted by jean.petrovic@bl.uk at 4:29 PM