Digital resources on the 17th, 18th and 19th century Caribbean

Imaobong Umoren is the co-winner of the 2021 Eccles Centre and Hay Festival Writer’s Award. Here she explores some of the digital resources which have supported her research so far.

With access to the British Library restricted due to lockdowns, taking advantage of the wealth of primary source material available electronically has offered me the chance to work on my current book project, Empire Without End: A New History of Britain and the Caribbean, which explores the entangled connections between the Anglophone Caribbean and Britain from the 1600s to today. I trace the history of colonialism and neo-colonialism considering especially the role they play in shaping structural and persistent inequalities facing both Britain and the Anglophone Caribbean. 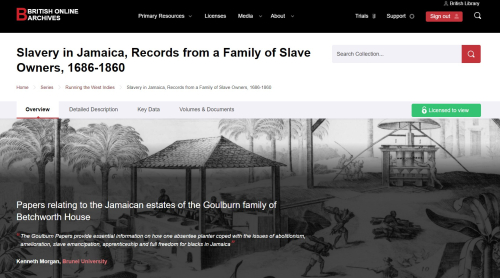 British Online Archives, landing page for the Slavery in Jamaica, Records from a Family of Slave Owners, 1686-1860 collection

My focus, for now, is centred on the seventeenth, eighteenth, and nineteenth centuries. The British Library’s subscription to the British Online Archives (remotely accessible for registered BL Readers) have provided me the chance to dig into rich collections that document the history of slavery and the post-emancipation era. I have found a wealth of material in collections such as Slavery in Jamaica, Records from a Family of Slave Owners, 1686-1860; Antigua, Slavery and Emancipation in the Records of a Sugar Plantation,1689-1907; Caribbean Colonial Statistics from the British Empire, 1824-1950; Slave Trade Records from Liverpool, 1754-1792; The West Indies in Records from Colonial Missionaries, 1704-1950; and The West Indies: Slavery, Plantations and Trade, 1759-1832.

E-books and digitised pamphlets relating to pro- and anti-slavery debates have also been valuable. Many of these can be accessed freely online without a British Library Reader’s Card. I have found the following especially useful: James Ramsay’s, An Essay on the Treatment and Conversion of African Slaves in the British Slave Colonies (1784) [BL Digital Store RB.23.a.1199], Elizabeth Heyrick’s ‘Immediate, not Gradual Abolition’ (1824) [available in the Reading Rooms as part of the ‘Slavery and Anti-Slavery: A Transnational Archive Part I’ e-resource; also available on Google Books], Thomas Cooper’s Facts illustrative of the condition of the Negro slaves in Jamaica (1824) [BL Digital Store 8156.c.30.], and Joseph Sturge and Thomas Harvey’s The West Indies in 1837 (1838) [BL Digital Store 1050.l.22.]. (The British Library’s digitisation collaboration with Google Books has made nearly 470,000 volumes, including these, available for free online. Find out more on the Google Books project page of the British Library website.) 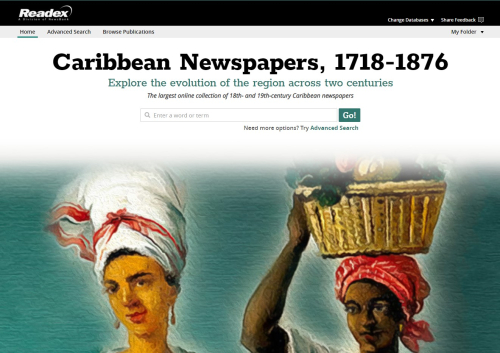 Useful too has been the Caribbean Newspapers Collection (also remotely accessible for registered BL Readers) which has afforded me insight into the broader context of this period from the perspective of elites especially the St Lucia Gazette, Bahamian, Nevis Guardian, Dominica Chronicle, Bermuda Gazette, and the Port-of-Spain Gazette. These newspaper collections span, for the most part, the period 1786-1876. I have also explored fascinating material in the African American Newspapers, Series 1 and Series 2 and the South Asian Newspapers collection, all available via remote access for registered Readers.

The Endangered Archives Programme has also given me access to a wide range of sources, freely available online, related to the history of the Turks and Caicos Islands, St Kitt’s and Nevis, Montserrat, and material from The Barbadian Newspaper, The Barbados Mercury Gazette, and the Deed Books in St Vincent during slavery.

All of these sources have proved rich and fruitful and once the British Library’s doors begin to open wider I am looking forward to diving deep into non-electronic sources especially on Black British political and artistic movements.

Posted by jean.petrovic@bl.uk at 5:35 PM