Joe Williams: ‘the need for flavour’

This is the second in a series of blogs coming out of the Eccles Centres’ Caribbean Foodways oral history project. Identifying connections between participants’ stories and collection items, each blog explores one of the nine oral history interviews that will be deposited in the Sound Archive.

This blog is about Joe Williams, the Leeds-born arts and heritage activist who researches the historic African presence in Yorkshire. This blog focuses on Joe’s memories of Leeds West Indian Carnival and his historical perspective on Caribbean food but you will soon be able to listen to his full interview via the British Library’s Listening and Viewing Service. 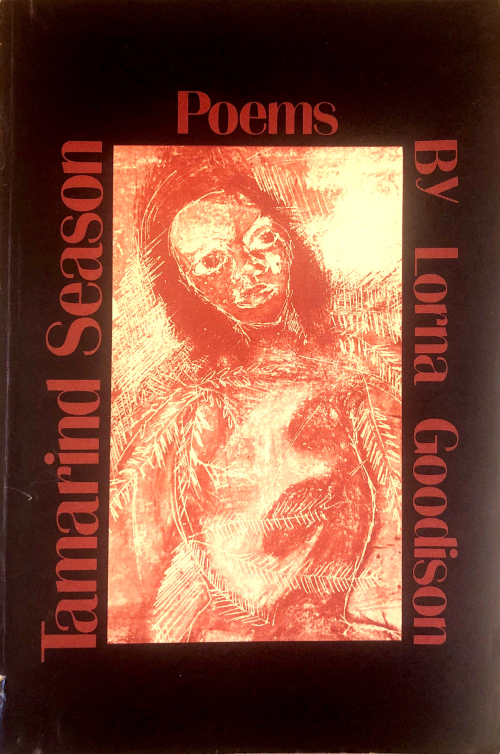 In Jamaica, tamarind season refers to a period of scarcity and hardship before the harvest. Invoking this in her first published collection of poetry, Tamarind Season (1980), Lorna Goodison expresses strength and optimism in face of suffering. Joe Williams echoes this motif of struggle and resilience throughout this recollections and understandings of Caribbean foodways, from Yorkshire to West Africa.

The fruit itself – what Joe calls ‘packaged sweets in nature’ – also connects Joe’s story to Goodison’s poem. In this clip, Joe recalls his sister joining the family in Leeds, from Jamaica, in 1969 and bringing fresh tamarind pods wrapped in newspaper. Joe’s evocative description of the lip-pursing – ‘makes you stand up’ – dark reddish-brown fruit provides a window onto the numerous delectable, novel and familiar items that would have been pulled out of tightly packed suitcases and trunks, as people came to join already-settled family members and friends in Britain.

The occurrence of siblings joining partially established families in Britain was common; families that been separated by the Atlantic’s economic and historic waves, what some historians have referred to as the ‘second Middle Passage’.1 Joe’s mother, Birdie Williams, a seamstress from Jamaica who had 10 children in Trench Town, Kingston, came to Britain alone in 1960. Joe locates his mother’s story as a ‘rare insight into the Windrush narrative’ that puts a spotlight on those women who bravely travelled alone ‘to create opportunities for their family’. Throughout the 1960s, Birdie’s husband and children joined her and Joe in Leeds – realising her dream ‘to get her children out of terrible conditions in the ghettoes of Jamaica, which were a legacy of the Transatlantic Slave Trade’.

In Andrea Levy’s Small Island (2004), the award-winning novel about post-war Caribbean migration, there is a similar narrative around food and arrival. When Hortense arrives in London to join her husband Gilbert, Kenneth – a fellow Caribbean settler – enquires about the contents of her luggage:

‘So you tell me she jus’ come from home? You know what she have in that trunk?
‘No, man.’
‘Come, let us open it. Mango fetching a good price. You think she have rum? I know one of the boys give me half his wage to place him tongue in a guava.’2

Whilst this conjures senses of yearning for the familiarity of home through foodstuffs, like Joe’s story, it evokes the personal and small-scale journeys of Caribbean produce, in pockets and suitcases. 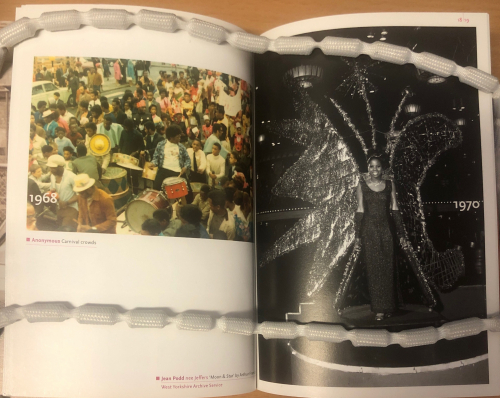 The longest running West Indian outdoor carnival started in Chapeltown, Leeds, in 1967. As Joe explains, Leeds’ West Indian population has a majority of people from St Kitts and Nevis – so Leeds Carnival reflects the unique cultural practices of these islands, such as Christmas Sports.3 Becoming more conscious as a teenager, Joe found his own way to carnival, describing it as a ‘welcoming and inclusive’ space where eclectic Caribbean cultures were shared.

Carnival marked an ‘opportunity to introduce people to the food of the West Indies’ from roasted corn to homemade patties. Evoking the sights, sounds and smells of carnival, Joe recalls a man with a machete chopping green coconuts. The journey of the coconut from Southeast Asia to the Americas, and its symbolic place at Leeds West Indian Carnival, reflects the complexities of Caribbean foodways. The coconut was introduced to the Americas as part of the Columbian exchange in the early colonial period, during the fifteenth and sixteenth centuries. J. W. Bennett’s The coco-nut palm, its uses and cultivation (1836) speaks directly to the transportation of certain plants and foodstuffs across the British empire – a point that Joe echoes in his critical discussion of Kew Gardens' colonial legacies. Bennett’s book embodies practices of extraction, exploitation and disavowal. From the exoticizing narratives of indigenous practices in ‘Ceylon’ to carefree recipes for coconut cocktails, it is, essentially, a planter’s manual for the production of capital, luxury and indulgence during an era of apprenticeship – which was, in practice, an extension of slavery. As Joe’s interview explores, Caribbean food cannot be disentangled from histories of slavery and resistance. 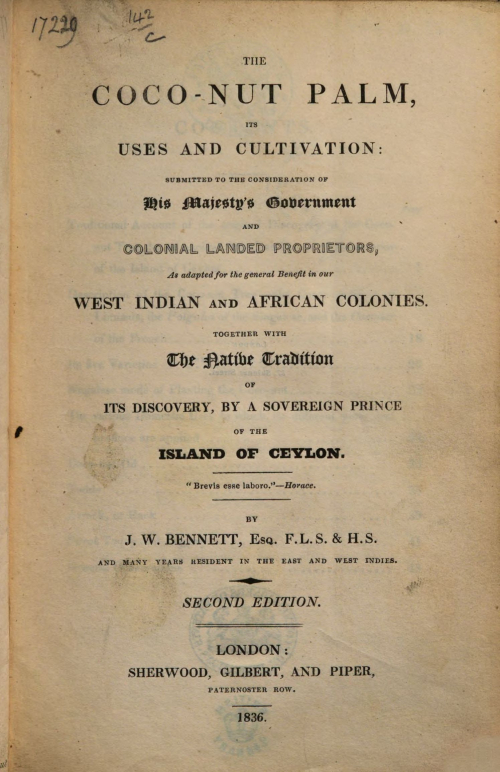 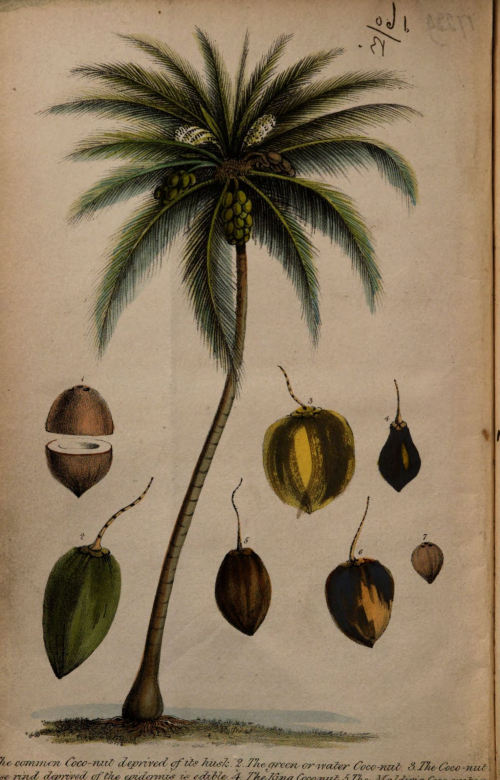 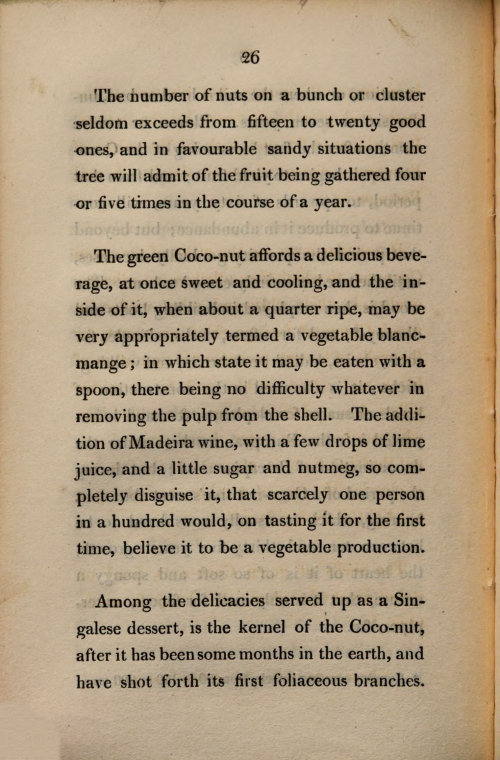 Hospitality in the home

Homes as spaces of commerce Throughout Joe’s descriptions of culinary commerce, there is a strong sense of resourcefulness, of what he calls ‘the culture of … survival’. This self-sufficiency was manifest in the houses that became social hubs for eating, drinking and playing dominoes, and by the creation of shebeens and blues parties. Drawing links between South African apartheid and the ‘colour bar’ in Britain, this editorial from Tropic highlighted the state’s failure to ‘put an end to the practice of racial discrimination in … public places.’ The exclusion from mainstream opportunities to engage in commercial and leisure practices meant that Caribbean communities had to construct their own spaces of enjoyment and commerce, to make money and experience joy, wherever possible. The fact that food simultaneously produces pleasure and capital means that it is an important arena for diasporic and migrant cultural-commercial production.

What Joe terms as a ‘need for flavour’ in this final clip, helps us to understand why and how the ‘brutality’ of Caribbean history has been ‘made into something beautiful that can be shared with others.’

Thank you Joe Williams for sharing your memories and thoughts with me.

Read the next blog in the Caribbean Foodways series - Charlie Phillips: the story behind Smokey Joe's Diner

Posted by jean.petrovic@bl.uk at 9:30 AM