This is the fifth in a series of blogs coming out of the Eccles Centres’ Caribbean Foodways oral history project. Identifying connections between participants’ stories and collection items, each blog explores one of the nine oral history interviews that will be deposited in the Sound Archive.

This blog is about Ranette Prime, a London-based lawyer and food enthusiast who set up her own supper club. Ranette’s parents, Randolph and Lynette Prime, travelled from Trinidad and Guyana to England, in the 1960s, and they have both shaped her love of food. This blog focuses on Ranette’s memories of family trips to Brixton market and life in Sheffield, but you will soon be able to listen to his full interview via the British Library’s Listening and Viewing Service.

On Sunday mornings, Ranette’s family would pack into a car and drive from West Sussex to Brixton Market, where they would spend the whole day stocking up on supplies of food, beauty products and incense. Ranette’s memories of the market speak to Brixton as a hub of Black Britain – a place where were nods and smiles were signs of ‘community acknowledgement’. Trailing round the market for hours, getting the best eddoes or the cheapest sarsaparilla, and make-up from Island Beauty, Ranette and her siblings were rewarded with patties at the end of the ‘marathon’ shopping trip. Ranette’s recollection that she ‘felt very at home in Brixton’ echoes Brixton’s history as a place of Caribbean settlement, political activism, commerce and leisure. 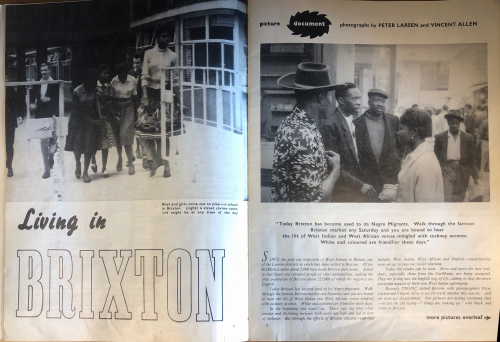 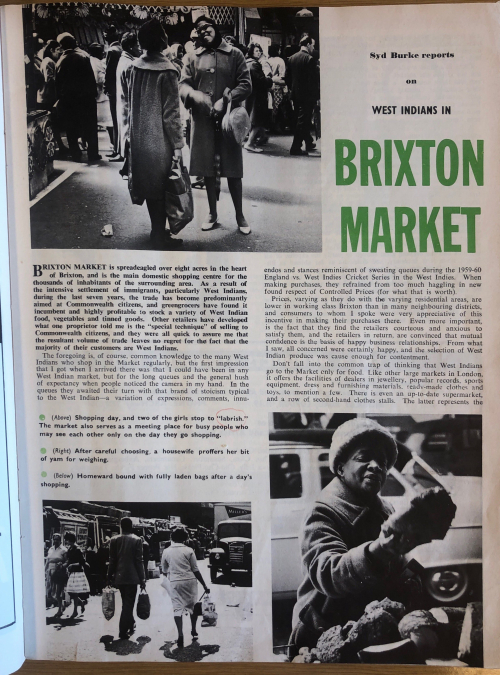 These articles from the 1960s reflect this sense of Brixton as the heart of Black Britain at the time. Founded in 1960, Tropic magazine was a popular glossy magazine that described itself as the ‘voice of 250,000 coloured people in Britain.’1 ‘Living in Brixton’ tells its readers that if you ‘Walk through the famous Brixton market any Saturday and you are bound to hear the lilt of West Indian and West African voices mingled with cockney accents.’ On the next page, the article pinpoints the highlights of living in Brixton, including a photograph of Claudia Jones at the West Indian Gazette offices that were housed at 250 Brixton Road – above Theo Campbell’s record shop – and Leslie and Chris Morgan’s Caribbean Bakeries Limited. Founded a few months after Tropic’s demise, Flamingo magazine was similar in terms of content and style. This 1963 article, ‘West Indians in Brixton Market’ explains the increasingly profitability of ‘West Indian food, vegetables and tinned goods’ alongside recognising its importance as a ‘meeting place’. As Ranettes’ interview reveals, her memories of Brixton market in the 1980s and 1990s are in dialogue with these longer histories that have been documented in Britain’s Black magazines.2

At the age of 11, Ranette and her family moved to Sheffield. As they built a new life, they sought out ‘parallels’ to what they had in London. Interestingly, the parallels that they were seeking were often food-based – they searched for familiar ingredients and flavours. In this clip, Ranette remembers a man called Martin who delivered Caribbean food to families across Sheffield. His van was an ‘Aladdin’s cave’ that was filled with fresh and dry foodstuffs, such as plantains, cakes and hardo bread. By the early 2000s Martin had opened a ‘massive’ shop in Pitsmoor, on the outskirts of Sheffield. This story of Martin’s evolution from his travelling van to a permanent shop captures Ranette’s broader reflections on adaptation and community-building, as Sheffield’s Black Caribbean communities established themselves. Establishing a sense of community in Sheffield was a gradual process and one that was at times complicated by questions of food and identity. ‘Surrounded by fish and chip shops’, Ranette expresses a sense of fascination with their signification of Britishness. This beautiful ‘Fried Fish and Chipped Potatoes’ rhyme, that was printed on greaseproof paper and published in Leeds, in 1906, embodies this quintessential ‘British’ fish and chips narrative that Ranette speaks of. However, these positive, wholesome and British connotations were a relatively recent development in the early 20th century. In Fish and Chips: A History, Panikos Panayi explains how Sephardic Jewish refugees brought traditions of frying fish to Britain in the late 19th century. Panayi interprets records of people complaining about the “nauseous odour”, as symbolising denigrating associations between fried fish and London’s poor areas, where Jewish communities settled.3 So, interestingly, Britain’s ‘national dish’ tells a history of migration, othering and adoption.

As well as eating fish and chips, Ranette remembers asking her mum to make that ‘British stuff … peas and fish fingers’, when her school friend came over to the house. Reflecting on her associations of certain foods, like shop bread and fish and chips, with British culture, Ranette remembers her young self, feeling a need to identify with these foods. This anecdote of culinary elasticity signifies the multiple ways in which people, especially children, self-consciously shape their identities. 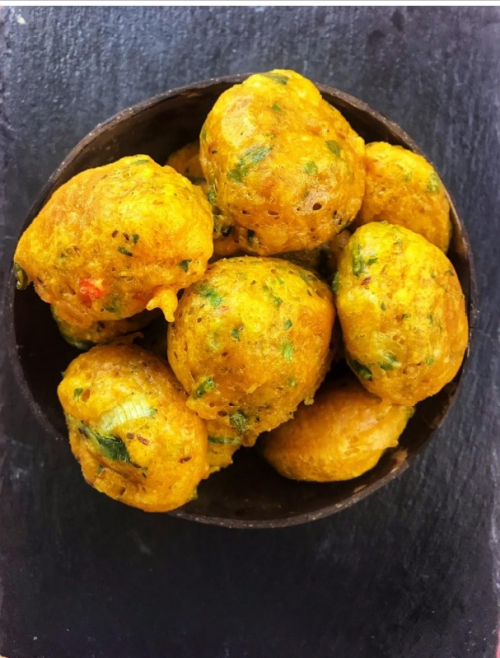 ‘I lived in little Trinidad as it were, and little Guyana at home’

As Ranette explains, her approach to cooking, whether at home or for her supper club (Eats and Beats), has been profoundly influenced by the food of her parents i.e. the food of Trinidad and Guyana. However, other cuisines, from Turkish to Korean, have also shaped Ranette’s tastes and cooking style. Speaking about the her parents, she describes a ‘common ground in their culture that Guyanese and Trini … complement each other really well’ – a harmony of tastes that is born out the region’s complex history. Phoulorie, which is widely eaten in Trinidad and Tobago and Guyana, reflects this ethnic and culinary crossover that is in part a result of their respective Indo-Caribbean populations. There is a basic recipe for phoulorie in E. Phyllis Clark’s West Indian Cookery book , but I think that Ranette’s recipe, which she has generously shared, sounds far tastier than Clark’s version which seems under spiced. Why not try it at home this weekend? 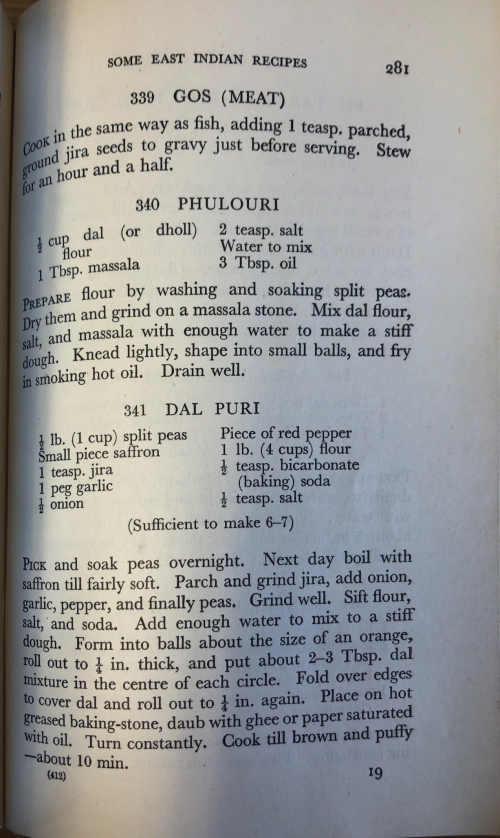 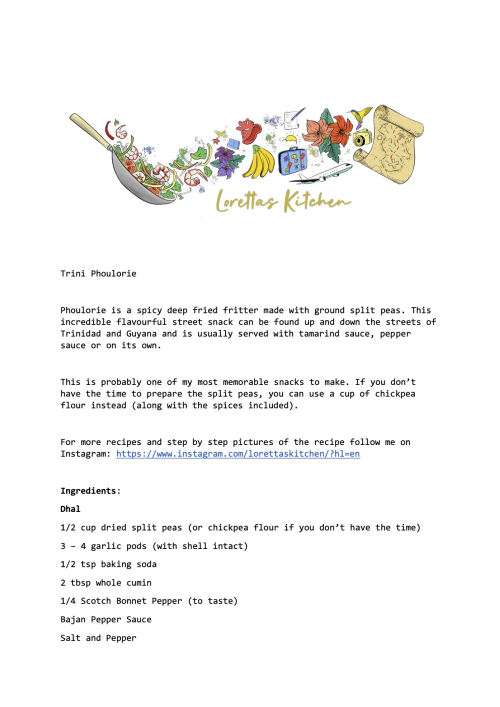 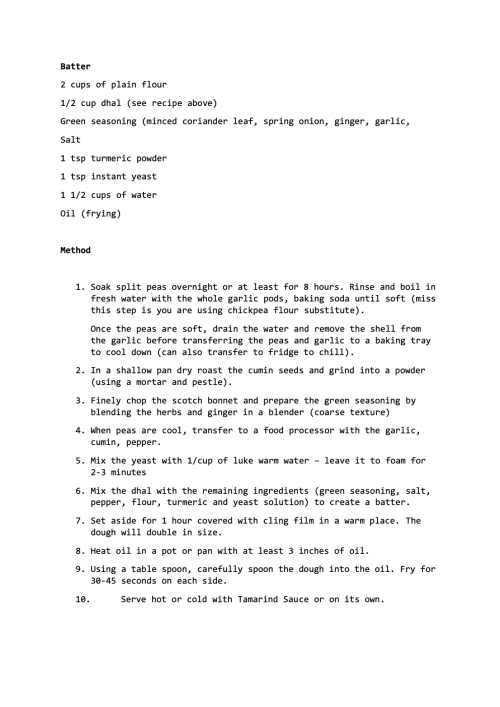 Thank you Ranette Prime for sharing your memories and thoughts with me.

Read the next blog in the Caribbean Foodways series - Anselm Berkely: From Field to Shelf to Plate

Read the previous blog in the Caribbean Foodways series - Sandra Agard: An Ode to Ridley Road