As the days turn to dusk over the next week across north east United States, billions of Magicicada nymphs will burrow their way to the surface after spending seventeen years underground. Having already been delayed by cooler than average temperatures, some have already begun to appear in geographic patches where the soil has reached a critical temperature. You can follow this on the Cicada Safari app which uses photographs and data provided by citizen scientists to create a live map of their emergence. 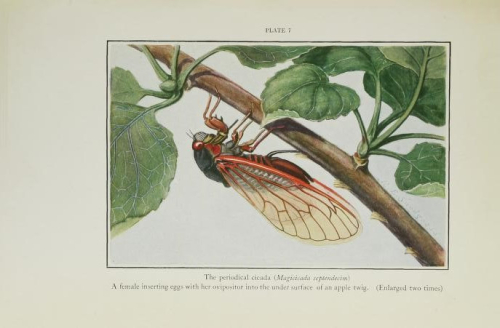 This particular group of periodical cicadas are known as Brood X, or the Great Eastern Brood. The brood is endemic to fifteen states in the eastern United States. Up to 1.4 million cicadas per acre, totalling in the billions, emerge and climb nearby vegetation where they molt their nymph exoskeletons and emerge in their imago form. 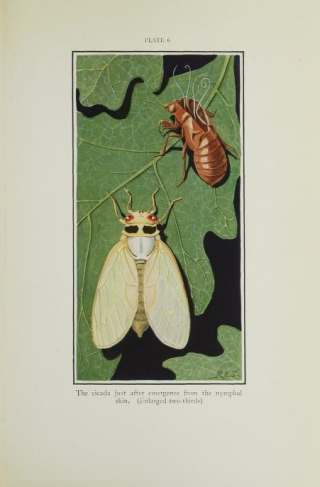 The males proceed to group together and ‘sing’ to attract females. Once mated, the female cicadas lay their eggs. Within a few weeks, the adult cicadas pass away. Soon thereafter, the newly hatched nymphs emerge and return to the soil where they will remain until the next cycle in 2038.

Cicadas are endemic to most countries with warmer climates (there is only one species in the UK which is under threat of extinction and unique to the New Forest). Unsurprisingly then, cicadas’ presence in print is scattered across the natural history record, and they also regularly appear as a motif in literature. While there are over three hundred species of cicadas, periodical cicadas are unique to the United States.

The first known written record of a Magicicada brood was in a 1633 report by the governor of the Plymouth Colony, William Bradford. He notes the brood’s appearance in relation to a disease that killed many of the local Indigenous populations as well as the Plymouth settler colonists. His description illustrates how reliant the relatively recent settlers were on Indigenous knowledge to help them to navigate their unfamiliar natural environment, and how this 17-year event was both familiar to and held significance for the local tribes. 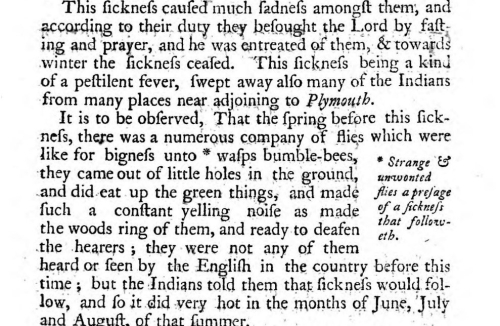 William Bradford’s account of a 1633 Magicicada brood can be found in New-England's memorial: or, a brief relation of the most memorable and remarkable passages of the providence of God, manifested to the planters of New-England, in America: with special reference to the first colony thereof, called New-Plymouth ... By Nathaniel Morton ... [The address “To the reader” signed: John Higginson, Thomas Thacher], ([Newport, R.I.] : Boston: printed. Newport: reprinted, and sold by S. Southwick]: 1772) http://access.bl.uk/item/viewer/ark:/81055/vdc_100027393994.0x000001

The following century, Swedish naturist Pehr Kalm wrote a lengthy essay on his witnessing of the emergence of what we now know as Brood X in 1749. His Description of a type of Grasshopper in North America, published in 1756, is an incredibly evocative and richly detailed account that gives a sense of how it must have felt to experience this phenomenon for the first time:

Among the many flying insects in North America there is a species of grass-hopper which seems to merit special discussion because of its extraordinary characteristics… Later, when I travelled through the Land of the Iroquois to the large waterfall Niagara, I heard its squall in the woods daily, for no matter where it is it does not remain silent for long…

These insects are extraordinary. They appear in astounding numbers with indescribable suddenness on certain years… In 1749, on the 22 of May, new style, these locusts or grasshoppers appeared in dreadful quantities in Pennsylvania. They had been lying in holes in the ground throughout the winter and spring like Eurcae, but on this day they crept out of their winter coats and came forth in summer dress. A tree could scarcely be found, in either forest or orchard, whose trunk was not entirely covered with them. Some had emerged from their pupal cases, others were emerging so they were half in and half out. Some had begun to try their wings. It was remarkable that on the previous day, that is the 21st of May, there were none… For seventeen years these insects had not been seen, now they appeared in fantastic quantities throughout the land…

...On the 25th day of May the insects were heard in the trees…They now made such a roar and din in the woods they could be heard for great distances. If two persons happened to meet they would have to shout in order to hear each other. If they were any distance apart it would be necessary to strain the voice to capacity in order to determine what was being said…

The handiwork of the Almighty Creator is easily recognized in the lives of these small creatures.

Kalm was clearly emotionally, intellectually, and spiritually moved by his meeting with Brood X. 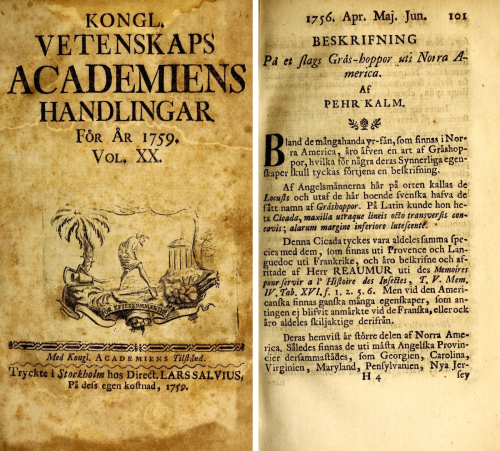 A separate account of the 1749 emergence was also documented by Benjamin Banneker, a free African American and self-educated polymath. Banneker is well known for his Almanacs which detailed daily life on his farm as well as astronomical observations, and his correspondence with George Washington on slavery and racial equality. His observations on natural science are less familiar, but remain noteworthy.

Written in 1800, these observations make Banneker “among the first American scientists to document and record chronological information of the seventeen-year cycle of the periodic Magiciada – Brood X". 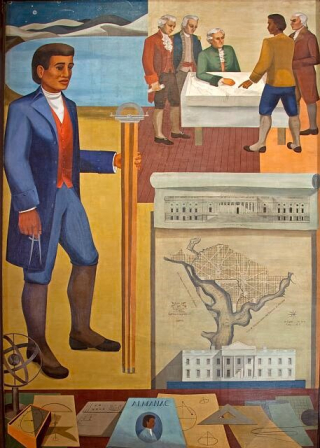 Perhaps unsurprisingly, the unusual life cycle of the Magicicada also catches the literary imagination and they make periodic appearances in biography, poetry, prose, and graphic novels. Across these works, two themes particularly stand out. The first is aural – the din, hum, buzz, drone, whirr, roar, squall – these little creatures cannot be ignored, particularly when in full throes of their communal love song. The second theme speaks of loss, re-emergence, and transformation.

Perhaps the most striking literary homage to the cicadas’ song is a poem in Paul Fleischman’s Joyful Noise: Poems for Two Voices. Magically illustrated by Eric Beddow, this collection designed for children celebrates insect life in all its joyous forms. 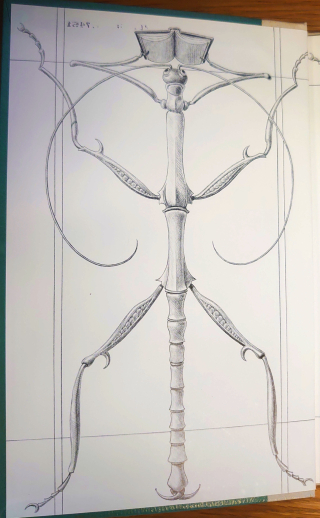 Each poem is intended to be read aloud simultaneously by two people. This has the effect of partially recreating the sound of the insects buzz, and eventual pairing-off. The dual voice also acts as an affirmation of the childhood experience of encountering and describing a newly discovered insect: the curiosity, wonder, and perplexity they inspire is best when shared (much like books being read aloud by parent to child). 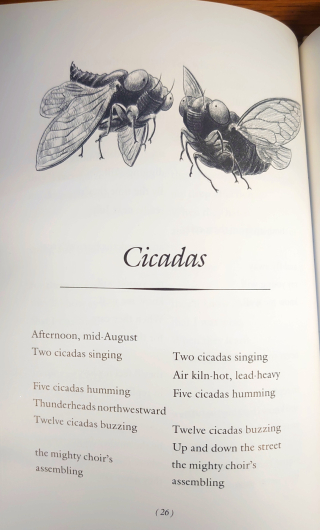 Mộng-Lan’s Song of the Cicadas also foregrounds sound. In contrast to Fleischman, she uses cicadas as a motif for exploring a coupling between two people. It should be noted that Mộng-Lan is Vietnamese and she moved to America with her family following the evacuation of Saigon in 1975, and has subsequently lived in Japan, Thailand, and Argentina. These experiences are alluded to through references to foreign lands, encounters in airports after long journeys, seasonal transformations, and the unpredictability of ‘fate’. She thus weaves through the poem allusions to the brooding and mating habits of periodical cicadas in order to evoke how this particular encounter resonated with the emotional experience of being an immigrant. This experience is signaled as transformative through its use of the visual imagery of an imago cicada emerging from its nymph exoskeleton at the molting phase:

skins subtle as persimmons
where the skin breaks at the fullest 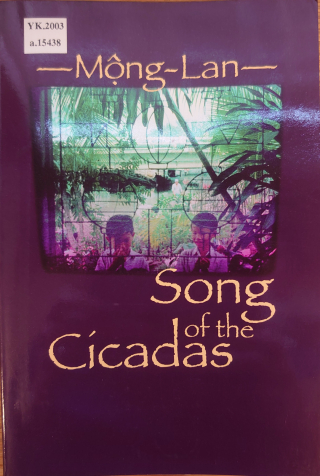 Another work that also makes use of cicadas in reference to the immigrant experience is Canadian author Elfreida Read’s A Time of Cicadas. This is the first in a series of memoirs about her childhood in Shanghai, her internment during the war, and her family’s subsequent emigration to Canada (Vancouver). It opens with a description of Shanghai, “my city, my Camelot”. A city, she says, that “was lost in time… you will never be able to go there yourself, any more than you can step at will into the substance and memories of those who lived there for that short enchanted time.” She then skillfully brings to life on the page a vision of summer in pre-war Shanghai accompanied by the soundtrack of “cicadas sawing in the treetops”. Here, the sounds of the cicadas evokes a nostalgia for a youth and a city lost to war and emigration. 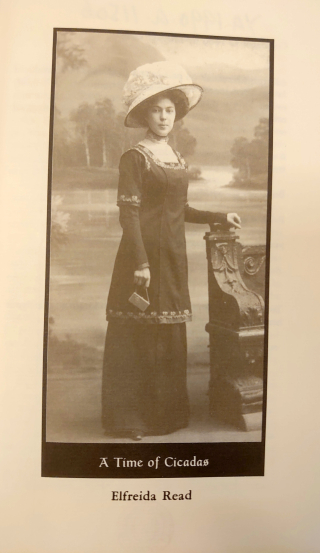 Just as we’ve been waiting for the cicadas to emerge, readers spent five years eagerly anticipating the arrival of this children’s book from Australian author/illustrator, Shaun Tan. Cicada, follows a green insect office clerk (the eponymous Cicada); a lone splash of colour trapped deep in the grey drudgery of an office job. 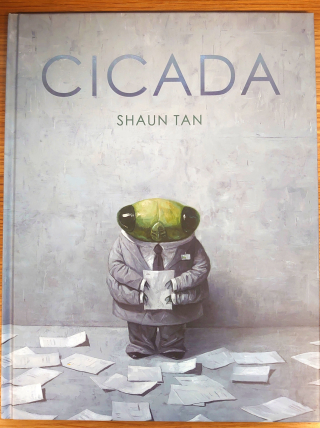 Underappreciated and mistreated, the cicada works harder and longer than the others, yet has less rights and lower pay than his human colleagues. Tan acknowledges the parallels here with the retirement of his architect father, a frustrated Chinese immigrant from Malaysia who felt undervalued by his Australian colleagues. Upon Cicada’s unremarked retirement after 17 years (the life cycle of a cicada), we follow as he winds his way up the stairs of the office block, finally emerging on to the roof. His drab outer shell of suit and tie is shed to reveal a luminous winged body which takes flight; joining thousands of others in the lush, bright forest for a brief, but explosive finale. 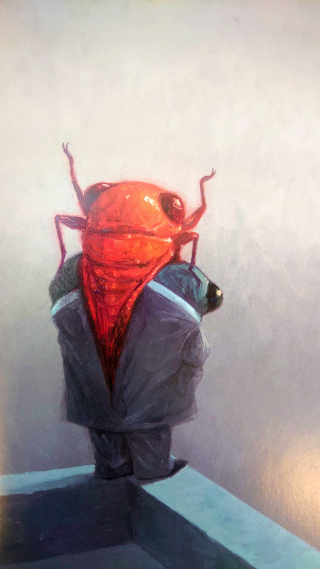 Detail from 'Cicada' by Shaun Tan.

Posted by Americas Team at 8:00 AM