Anselm Berkeley: From Field to Shelf to Plate

This is the sixth in a series of blogs coming out of the Eccles Centres’ Caribbean Foodways oral history project. Identifying connections between participants’ stories and collection items, each blog explores one of the nine oral history interviews that will be deposited in the Sound Archive.

This blog is about Anselm Berkeley who was born on the island of Grenada in 1936. Moving to England in 1960, Anselm worked at Macfarlane Lang, the biscuit company, for 22 years before setting up a shop that sold West Indian produce in Shepherd’s Bush Market. When rent increases pushed him out of the market, he returned to Grenada in semi-retirement where he exported fresh produce to Britain. This blog focuses on Anselm’s memories of Grenada, his shop in Shepherd’s Bush market and his extensive experience of working in the business of supplying food, but you will soon be able to listen to his full interview via the British Library’s Listening and Viewing Service.

‘grow … and sell nutmegs all his life’ 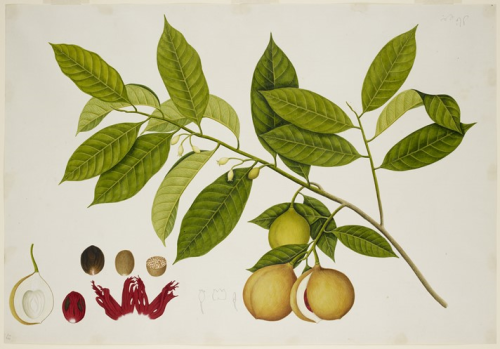 The small, brown, hard balls that we buy at shops in Britain, and grate into marinades and cakes, were once luscious greeny-yellow seeds growing on a tree, most likely, in Grenada or Indonesia.1 Known as ‘Black Gold’, nutmeg (which appears on the national flag) denotes Grenada’s identity as the ‘Island of Spice'. The largest producer of nutmegs in the Western Hemisphere, this nutty and aromatic spice features heavily in Grenada’s histories of flavour, imperialism and revolution.

Anselm Berkeley’s grandfather owned 15 acres of nutmeg land and before school, Anselm would ‘go up in the mountain … and pick up nutmegs and tek it back down to the village’. Later in the day, his parents would ‘go to the association and sell our nutmegs’. The ‘association’ refers to the Grenada Co-operative Nutmeg Association that was set up as the sole exporter of nutmegs from Grenada in 1947.

Brought to Grenada in 1843, nutmeg required ‘less land, capital and labour’ than sugarcane.2 As the price of sugar fell, abandoned plantations, that were ripe for ‘cultivation and settlement,’ were bought, leased or squatted by ‘Emancipated Africans and former indentured migrants.3 By the late 19th century, nutmeg had replaced sugar exports in Grenada. Perhaps Anselm’s ancestors were some of the original ‘Black Gold’ farmers on the island. 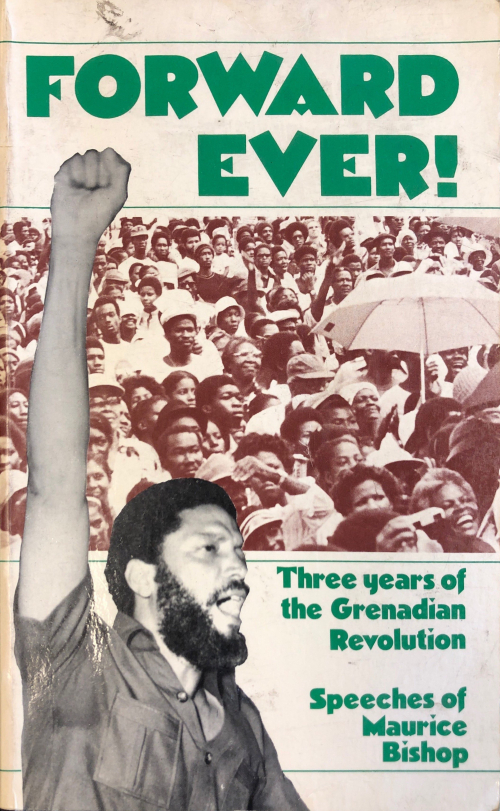 In 1979, When the People’s Revolutionary Government (PRG) came to power in Grenada, this small yet potent seed became a symbol for imperial control that extracted profits from the region:

‘A sister cracking nutmegs at a receiving station in Grenada receives a small wage of $7.10 a day, and that sister would need to crack about 150 pounds of nutmegs in order to earn that $7 for the day. Those same nutmegs are sold to a broker – a middleman – and taken off to Europe. Then they are resold to a miller, cleaned, blended, and packaged, and put on the shelves of European supermarkets. And when one of our sisters or brothers or aunts living in Shepherd’s Bush or Brixton or Hammersmith in London goes to buy a one-ounce carton of Grenada nutmeg, the price of that ounce of nutmegs is about 20 pence or one of our dollars. One ounce for $1, but 150 pounds of cracking for $7. … the real value of the nutmeg worker’s labor is 300 times what she receives in a day’s wage. That is what we mean by imperialism at work.’

Bishop’s speech was reflective of the PRG’s broader Agro-industrial policy, in which questions about crops and food reliance became a critical part of political debate.4 Interestingly, Anselm’s journey, from picking nutmegs in the mountains to running his own export business that shipped fresh Grenadian produce to Britain, represents a politics of independence that took ownership of foodways between Grenada and Britain.

Shepherd’s Bush Market: ‘one of the first shop fronts’ 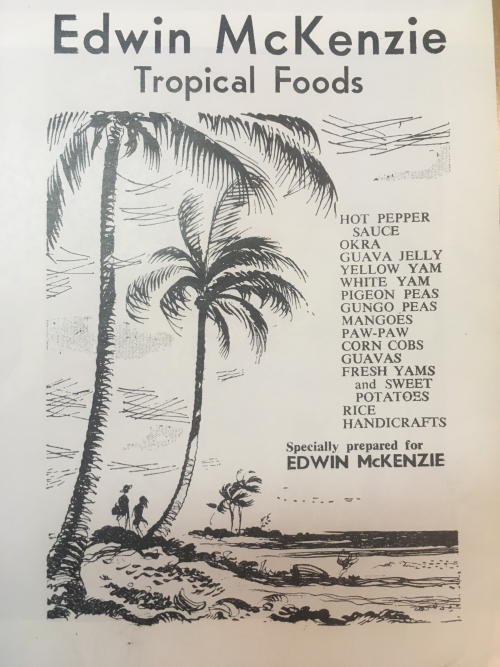 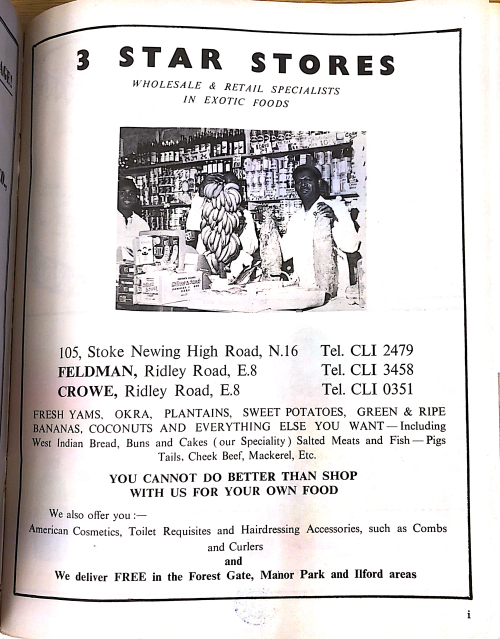 ‘Some enterprising West Indians went to the importers and got the stuff, eliminating the middle man. These stuffs were sold from street to street wherever they could find West Indians and Africans. Later they bought out the shops.’

In the mid-1980s, Anselm took over one of the first permanent shopfronts selling West Indian food in Shepherd’s Bush Market. Much like these adverts for Edwin McKenzie and 3 Star Stores, Anselm’s shop sold fresh and dry produce. One of the earlier Caribbean-owned Caribbean food shops, Anselm’s story is part of a broader history of Caribbean people establishing their own supply chains in post-war Britain.

On a typical day, Anselm would arise from the family home in Thornton Heath at 4am and drive to Spitalfields Market to buy produce. Arriving in Shepherd’s Bush by 7am, he then unpacked the goods and arranged fresh produce on a bench outside of the shop. Fridays and Saturdays were the busiest days because that 'was the time that the majority of people get paid', so on Friday evening when the 'women come from work, they pass in the market' and bought food from his shop. Anselm recalls spending long days in the shop alone with no break until his children were old enough to lend a helping hand. Running the shop was ‘very hard work’; Anselm would get home at 7pm – meaning he was working 15-hour days, 6 days a week, with Sundays spent bookkeeping.

Chatting at the shop

Anselm’s shop was also a social hub, people ‘would come to chat’ and meet their friends and fellow customers there. Next door to Websters’ record shop, Anselm’s had a unique atmosphere that drew custom from across London. This reminds me of Sam Selvon’s Lonely Londoners, ‘the iconic chronicle of post-war Caribbean migration to Britain.’5 Tanty, an elderly aunt in the novel, makes frequent visits to the grocers:

‘Well Tanty used to shop in this grocery every Saturday morning. It does be like a jam-session there when all the … housewives go to buy …. They getting on just as if they in the market-place back home: “Yes child, as I was telling you, she did lose the baby … half-pound saltfish please, the dry codfish … yes, as I was telling you … and two pounds of rice please, and half-pound red beans, no, not that one, that one in the bag in the corner” … She too like the shop, and the chance to meet them other women and gossip.’6

Selvon’s description reconstructs the social vibrancy of the grocers as a place for conversing, gossiping and shopping. A public space of domesticity where the ‘market-place [of] back home’ could be recreated to produce feelings of familiarity and comfort. Anselm’s son, Rob Berkeley, describes how ‘Food traditions from across the Caribbean were exchanged, recipe secrets passed on, new fusions created, and old friendships rekindled.’

Fire in the market

During his 14 years at Shepherd’s Bush Market, there were four arson attacks at Anselm’s shop. This disturbing and upsetting part of the story speaks to the struggles that Anselm faced. Speaking about the first fire, that was done ‘deliberately from outside of the shop’, he recounts how the shop and shuttering were burnt out and all of his produce – most of which was uninsurable – was destroyed. Anselm explains that it is ‘hard to describe how he felt … there was nothing I could do.’ While the shop was being repaired, Anselm had a temporary stall on the market. On the Saturday after the fire that had happened two days prior, Anselm recalls how his customers refused to walk down Shepherd’s Bush Market and queued, waiting to buy from him, at his temporary stall. No one was ever charged with starting the fire and Anselm explains that he never received any information from the police about any suspects or the wider case. Whilst the state failed to respond effectively to the fire, the community rallied around Anselm. This dynamic, of state failure and community mobilisation, has been a defining characteristic of Black British history. 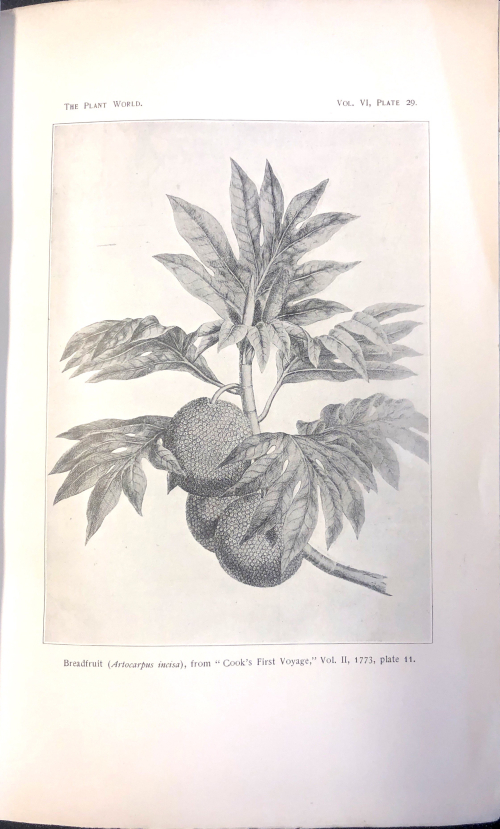 William Elwood Safford, The Breadfruit … Together with a biographical sketch of the author (Washington: H. L. McQueen, 1904) BL Shelfmark 7031.bbb.4.

Anselm left the market in 1996 mainly due to sharply rising costs of running a shop there. Returning to Grenada with his wife, Rita, they started exporting Caribbean food to British markets from a farm that they created back in Grenada. They sent fresh produce, like mangoes and breadfruit – a favourite of Anselm’s – by air, to agents in the UK. Anselm’s circular journey from Grenada to Britain and back again (him and Rita recently returned to the UK) embodies the fluidity and connectivity of Caribbean foodways.

Thank you Anselm Berkeley for sharing your memories and thoughts with me.

Read the next blog in the Caribbean Foodways series - Natasha Ramnarine: Doubles Queen

Read the previous blog in the Caribbean Foodways series - Ranette Prime: Food and Identity in Britain