On June 5, 1981, the US Center for Disease Control published an article in its Morbidity and Mortality Weekly Report that identified and described five cases of a strain of pneumonia in gay men in Los Angeles. This was the first time that what subsequently became known as HIV and AIDS was described in the medical literature. As we approach the 40th anniversary of that date, this post will look at some items in our collections produced by health and social care bodies, and community-based AIDS activist organisations.

The impact of AIDS on minority ethnic and Indigenous groups was considerable. This was partly due to an increase in risk associated with poverty and other social conditions that disproportionately affect these groups. Fairly quickly, it became clear that targeted and culturally sensitive information was a key component of preventing the further spread of HIV.

In time, there was a rise in community activism to counter wide public misunderstanding of HIV/AIDS and to support people infected with HIV. For some, these organisations were literally lifelines where they previously had been on the receiving end of terrible discrimination both within and outside of their communities, social isolation, and lack of access to adequate healthcare. They also acted as advocates, pushing for policy change at a local and national level, and gradually improving conditions for people within their communities who had a diagnosis of HIV/AIDS. 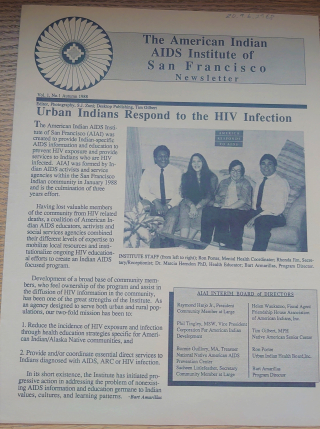 The above image shows the cover of the first newsletter published by the American Indian AIDS Institute of San Francisco (AIAI). The newsletter outlines who they are, why they formed, and what is different about their services. It states that AIAI "was created to provide Indian-specific AIDS information and education" and that they have prioritised "development of a broad base of community members, who feel ownership of the program and assist in the diffusion of HIV information in the community." As well as serving as an information and educational hub, they worked to "provide and/or coordinate essential direct services to Indians diagnosed with AIDS, ARC or HIV infection." They go on to describe how historic problems hampered AIDS prevention and care efforts amongst Native American communities. For example, inaccurate recording of ethnicity by medical professionals resulted in an under-reporting of incidences of infection amongst Native Americans. This was compounded by historic gaps in health related data for Native Americans, such as rates of intravenous drug usage. Additionally, the separation of urban Native Americans from their communities, as well as the regular movement between tribal reservations and cities made it difficult to track transmissions and case-rates. Taken in combination, these factors resulted in insufficient funding being allocated by the government to Indian communities for AIDS prevention and care. The AIAI thus lobbied for the Center for Disease Control "to require or convince states to begin reporting American Indian/Alaska Natives as a separate ethnic category for AIDS surveillance."

AIDS is also an Indian problem published by the Native American AIDS Advisory Board, 1988. Shelfmark YD.2019.a.4306

Organisations such as AIAI were able to be much more responsive to the issues on the ground because they had the direct input of their community members. They also more easily gained the trust of Native Americans living with HIV and AIDS because their communications and models of community healthcare were built around traditional kinship networks and incorporated familiar traditions. Art and poetry by community members feature heavily in public health pamphlets, and these speak to themes of renewal, spirituality, and tribal identities. Personal accounts also identify that these culturally specific details marked the difference between engagement and disengagement, self-care and self-neglect, and consequently had an impact on both HIV prevention and pride in a Native Two-Spirit identity (it should be noted that Two-Spirit is neither a universal term, nor has a fixed meaning across tribes).

Educational materials targeted to other minority ethnic people living with HIV/AIDS similarly responded to specific gaps in existing provision. Indeed, some community AIDS activists felt that national AIDS activist organisations overlooked important socio-economic, cultural, and geographic differences in their campaigning, and thus inadvertantly exarcebated a discrepancy in provision. For example, Jesus Ramirez-Valles, a sexual health educator and activist working across the border in Juarez, Mexico and El Paso, USA states that "our work was different from what was taking place in the north, especially New York and San Francisco... We did not have the financial resources needed to launch large prevention and treatment programs." He also goes on to carefully explain that "we were not defined as 'gay men' or 'queer people' fighting AIDS. Nor were we white, Latino, or black men. We were a group of men (albeit, marginalized) organised around AIDS... That was the case in our own little corner of Mexico (and in the backyard of the United States), anyway." The AIDS activism conducted by Ramirez-Valles and his eighty compañeros is thus better described as "an underground community that operated in a homosexual culture within spaces outside of the public view." He explains that this was a choice taken because it resulted in greater engagement with local men living with HIV/AIDS who would otherwise have avoided seeking support. This geographically specific narrative illustrates how local community organisations are often best-placed to identify pragmatic strategies in healthcare activism that bring improved results in education, treatment, and support.

By contrast to El Paso and Juarez, Latinx and Black gay AIDS activism in New York and Los Angeles directly and publicly engaged with the consequences of intersectional identities on the lives of many people leaving with HIV/AIDS. Corpus, pictured above, was a collaborative publication by the Institute for Gay Men's Health (NY) and AIDS Project Los Angeles. It is a bilingual serial that collects creative work by the members the organisation worked with. Essays, artwork, photography, and creative writing regularly touch on themes of pride in sexual, gender, racial, and ethnic identities. 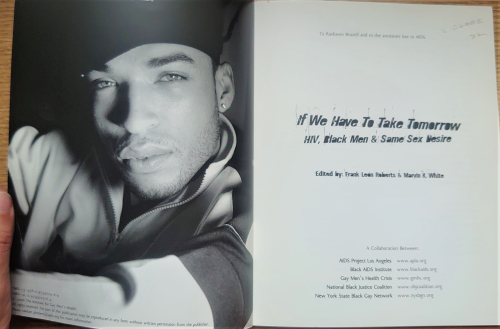 Inside cover of If We Have To Take Tomorrow: HIV, black men & same sex desire

Similarly, If We Have To Take Tomorrow: HIV, black men & same sex desire directly addresses race, sexuality, and HIV/AIDS through a series of contributor essays and photographic portraits. The contributors variously identify as queer, gay, trans, and speak directly about the relationship between their racial, ethinc, gender, and sexual identities. For example, one contributor, Charles F. Stephens, states in an essay titled "Performing Black and Gay: butch queen radicalism" that "a butch queen for me is a radical act of resistance to normative black subjectivity, and mainstream gay homogeneity... I perform black and gay, assuming a Butch Queen self, that allows me to see clearly the world I want to live in." The collective expressions of identities in this publication thus celebrate being black and queer/gay/trans. 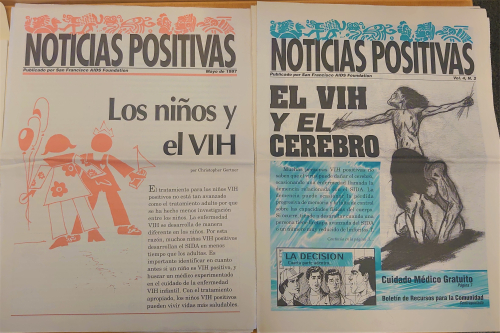 It is now well documented that a positive self-identity and finding support amongst peers reduces risk behaviours. Needless to say such friendship and community networks also provide invaluable support during times of crisis and distress. Additionally, more formal community organising has resulted in improved access to and provisions for people living with HIV/AIDS. The resources highlighted here, while often providing sobering accounts of the personal and social impact of AIDS on minority ethnic and Indigenous peoples, also offer stories and creative expressions of healing, of hope, and of mutual strength forged through community bonds.