This is the seventh in a series of blogs coming out of the Eccles Centres’ Caribbean Foodways oral history project. Identifying connections between participants’ stories and collection items, each blog explores one of the nine oral history interviews that will be deposited in the Sound Archive.

This blog is about Natasha Ramnarine, an NHS programme manager who cooks up a storm on the weekend for Natty’s Saturday Kitchen. Growing up in Trinidad, Natty moved to London in 2007. This interview focuses on her deep knowledge of Indo-Trinidadian food and her experiences of migrating to England but you will soon be able to listen to her full interview via the British Library’s Listening and Viewing Service.

‘Doubles is a derivative of the Indian dish, Chole Bhature … a flatbread with spiced chickpeas and condiments’

Doubles are one of the most popular dishes at Natty’s Saturday Kitchen – a food business set up by Natasha to promote the flavours and history of Trinidad. As she explains in this clip, the spiced chana (chickpeas) that sit atop bara (fried flatbread), evolved from the Northern Indian street food, Chole Bhature, which is commonly eaten in the Punjab. In Trinidad, doubles became a popular food ‘for labourers that would work in the sugar plantations’ because ‘it was cheap, costing only 5 cents … and mobile, it was just put in brown paper so that they could hold it and eat it as they were going home because they were hungry.’ Natty’s description of men on bikes, fitted with a ‘huge Styrofoam cooler’ from which piles of bara, containers of chana and condiments would emerge, signifies the transportable and transient mode of serving and eating that was suited to both small businesses (with minimal start-up costs) and hungry workers (who were time and money poor).1 This spicy, tangy and filling snack – that incorporates Indian seasoning alongside Trinidadian flavours and produce – embodies the entangled history of Indo-Trinidadian food. 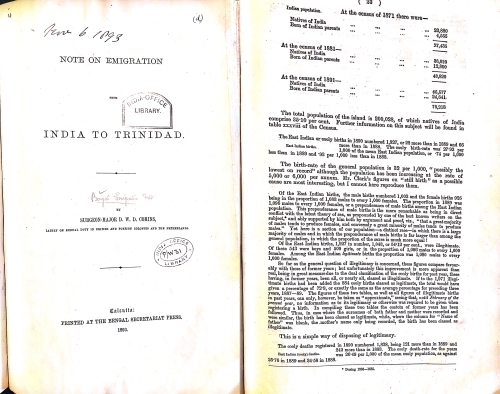 Like the food that she cooks, Natty’s story is rooted in Trinidad and Tobago’s histories of indentureship. Following the abolition of slavery across the British Empire, in 1834, and the end of the apprenticeship period in 1838, colonialists sought labour from elsewhere in the British Empire – chiefly India and Hong Kong. In 1837, the East India Company set out regulations for the system of indentureship, whereby emigrants would have to provide a minimum of 5 years’ service before being ‘returned’. As Trinidad had some of greatest labour shortages, it saw the arrival of Indian men, women and children in significant numbers between 1837 and 1917, when the system was suspended as part of the wartime emergency.2 According to Notes on Emigration: India to Trinidad, 127,240 people travelled from East India to Trinidad, between 1845 and 1891. Arriving on ships from Kolkata (Calcutta) and Chennai (Madras), there was a strong correlation between crop failures and patterns of emigration out of India’s agricultural districts.3 As the story of Natty’s great grandmother, Babooni Cheddi, reveals, many of these ‘labourers’ did not ‘return’, they stayed and built communities. The source below shows that by 1893, 35.1% of population was of Indian origin, which is virtually identical to 2011 figures of 35.4%.4 Aside from demographics, cooking is just one of the ways that the legacies of Babooni Cheddi and thousands of other first- and second-generation East Indians lives on in Trinidad and Tobago, as an integral part of its culture. 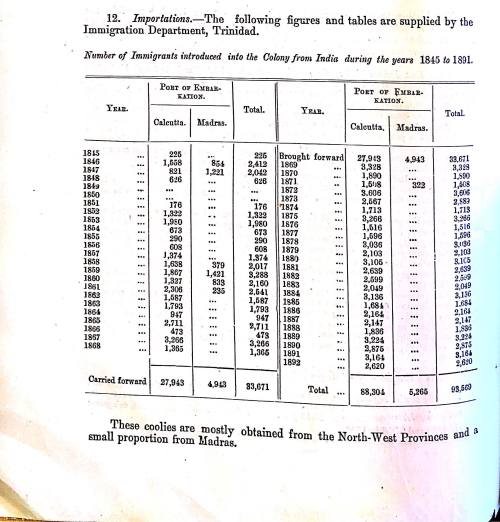 From rotis to curries, the Indian influence in Trinidadian cuisine is unmistakable. As Natty explains through her familial connection to this history and her own research, emigrants brought seeds such as okra and aubergine with them, which have become a popular part of Trinidadian cuisine. However, they also adapted – coriander was substituted for chadon beni, the green herb that ‘grows anywhere’, and Hindu and Muslim cultures blended with one another, which Natty captures in an anecdote about her devout Hindu grandmother reciting Halal prayer when she killed chickens.

Throughout Natty’s interview, she describes the wonders of this rich food culture, from the everyday array of breads and spiced vegetables to the festive eating of a goat or duck on special occasions. This clip evokes the aromas of whole cumin seeds, garlic and hot pepper crackling in a ladle of oil before it is thrown over a pot of cooked dal or split pea. Explaining how her grandmother and mother would rise in the early morning to prepare homegrown coffee and get started on the day’s endless chores, Natty is always attune to the intensive labour that went into making these staple dishes, such as washing starch out of rice or picking stones from split peas. This unpaid labour is one element in what she calls a patriarchal system. The legacies of her mother and grandmother’s labour can be tasted in Natty’s delicious food – these are the flavours and techniques that she reproduces and plays with at her home in South London. 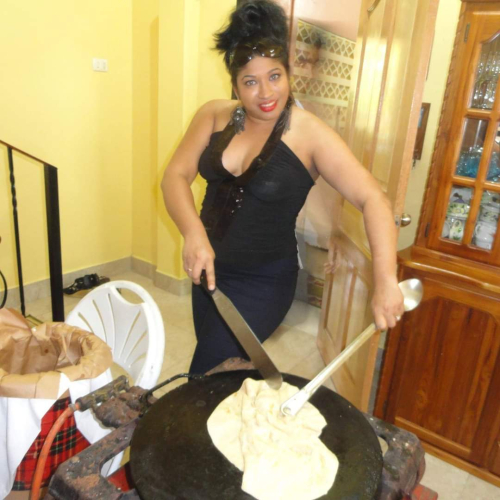 Every Saturday, Natty cooks her take on a different Trinidadian dish, which customers come and collect from her home. Her most popular meals are ‘doubles, roti and curry, shark and bake, crab and dumpling,’ which are always served with a side of history. As Natty explains, ‘the point of my food is to educate’ and if you look on Natty’s Saturday Kitchen Facebook page you will find delectable photographs of what she’s whipped up that week alongside stories about the ‘evolution of dishes and how it linked back from India or from Africa.’ Rather than forgetting or minimising the complex histories that this cooking is rooted in – which can be an issue when foods are commercialised or appropriated – the explicit historical connections that Natty promotes through her food business are revealing of her philosophy, of ‘unity in diversity through our food.’ 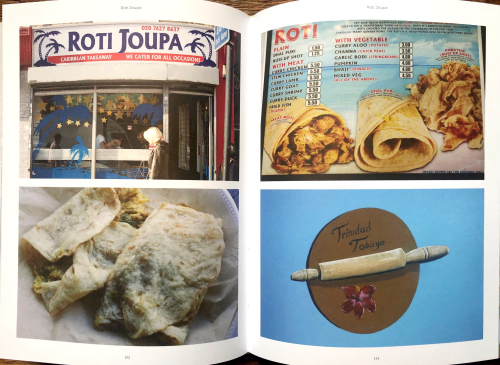 Travelling from a ‘small island’ to another island is a common experience for those that have journeyed from the Caribbean to Britain (by choice and by force) for hundreds of years. This ‘shift in culture’, that Natty describes, is manifold, from modes of conversation to eating habits. Food is often the medium through which people recreate a sense of cultural familiarity as they navigate this island. Natty’s story of going to Roti Joupa in Clapham North when she moved to London, conveys this intense bond between belonging and food. One of the first places to sell Trinidadian roti in London, Natty says that ‘going there was just like walking into the sunshine’. This ‘walk in the sunshine’ referred to the general atmosphere of the shop, which offered Natty a chance for ‘picong’ (banter) and catching up on Trinidad, as well as the aromas and textures of familiar dishes like roti and dhal puri. This reminds me of Riaz Phillips’ essay on Roti Joupa, in Belly Full, where he describes it as ‘likely the only option close by for people craving a taste of the eastern Caribbean shores’ with ‘the constant energetic Soca music emanating from the shop’s speakers.’5 Both of these accounts echo the importance of food outlets in the creation of diasporic spaces of home, comfort and pleasure.

Thank you Natasha Ramnarine for sharing your memories and thoughts with me.

Read the previous blog in the Caribbean Foodways series - Anselm Berkeley: From Field to Shelf to Plate