This is the ninth and final blog coming out of the Eccles Centres’ Caribbean Foodways oral history project. Identifying connections between participants’ stories and collection items, each blog explores one of the nine oral history interviews that will be deposited in the Sound Archive.

This blog is about Hazel Daniels who was born in Guyana in 1946. Training and practicing as a radiographer in Georgetown, she then married Omar Daniels in 1973 and moved to the UK in 1975, where they have lived ever since, raising their three children. An enthusiastic home cook, Hazel likes to experiment with different cuisines and flavours in the kitchen, but is guided by her Guyanese roots. This blog focuses on Hazel’s descriptions of Guyanese ingredients and dishes alongside her philosophy of food and health, but you will soon be able to listen to her full interview via the British Library’s Listening and Viewing Service. 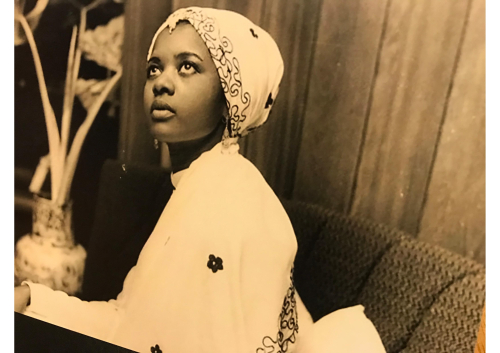 ‘if you want to take something forward, into the future, I think it has to be pepperpot’ 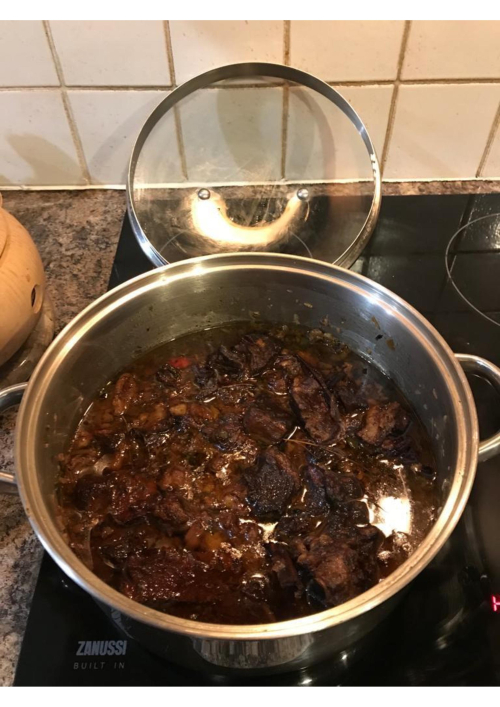 All the participants of Guyanese heritage that I have interviewed for the Caribbean Foodways oral history project spoke about pepperpot. A dish with First Nations origins, pepperpot is history in a bowl. Paying tribute to the First Nations people of Guyana, ‘the people who were there hundreds and hundreds of years … before the colonies,’ Hazel explains the intriguing process of making this historic meal. The key ingredient is cassareep, which is made from boiling cassava for hours, until the pristine white flesh of the root becomes a ‘dark substance.’ The seemingly magical ‘preservative quality’ of the cassareep means that this rich stew, which is made from combining meat, fish or vegetables with the dark sauce, does not need to be refrigerated and it sits on the back of the stove, being eaten day in and day out until the pepperpot is gone!

Also commenting on the importance of the cassava to 'Guinan natives', Rev. J. G. Wood's exploratory index to Charles Waterton's, Wanderings in South America (1882) described how boiled cassava was then 'flavoured with red-pepper' to become the 'well-known cassareep' and that 'when the palate has become accustomed to the inordinate amount of red pepper, is not only nourishing but appetizing.'1 Moreover, 'the pot is never cleaned, so that, as it is very thick, very soft, and very porous, it absorbs the juices.'2 Alongside Hazel's interview and recipes, Wood's glossary evokes the continuity of cassareep in Guyana's foodways. 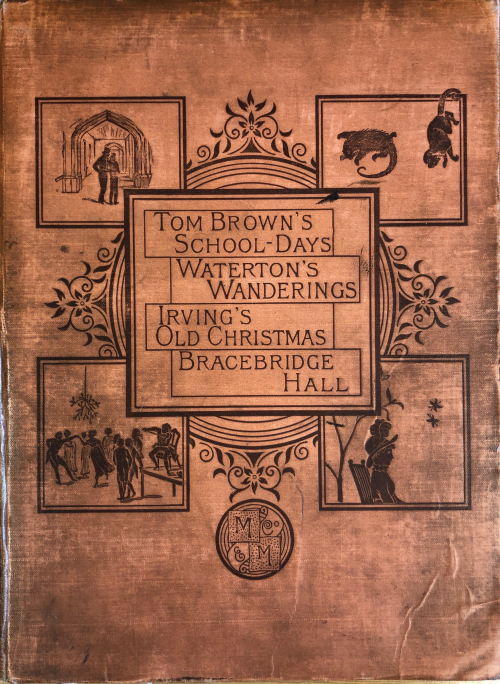 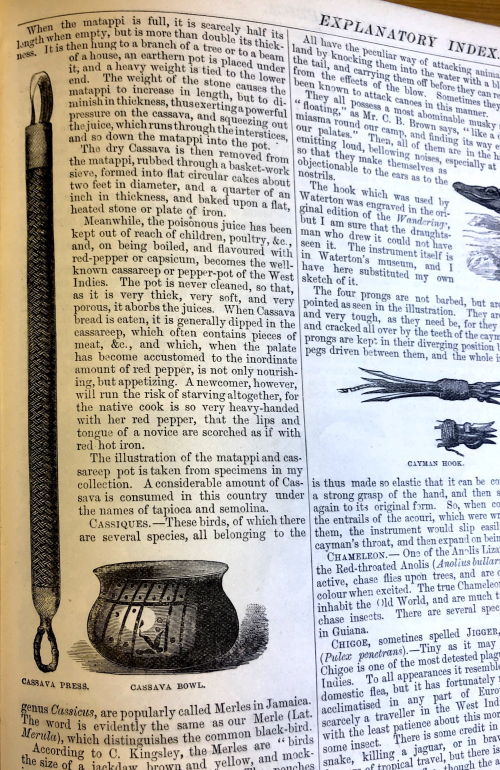 In Olive Senior’s introduction to Pepperpot: Best New Stories from the Caribbean, the poet states that: ‘One thing that unites us in the Caribbean is food, especially the melange: we all love pepperpot by any name - calalu or sancocho or ‘Saturday soup.”’3 Like many Caribbean dishes, pepperpot embodies cultures of creolisation and adaptability that reflect the region more broadly. Hence, there are numerous versions of pepperpot. ‘Pepperpot a la Jamaican’ that is featured below, does not include cassareep. The article sarcastically claims that ‘We are told that our pepperpot is but a poor imitation of the real thing which originated in British Guiana’. Likewise, the version described in recent Netflix series, High on the Hog: How African American Cuisine Transformed America (based on food historian, Jessica B. Harris’s book), seems closer to a take on oxtail stew. ‘The most popular dish in Philadelphia in the eighteenth and nineteenth century,’ chef and artist, Omar Tate, explains that pepperpot was sold by free women of colour who made a living as street vendors.4 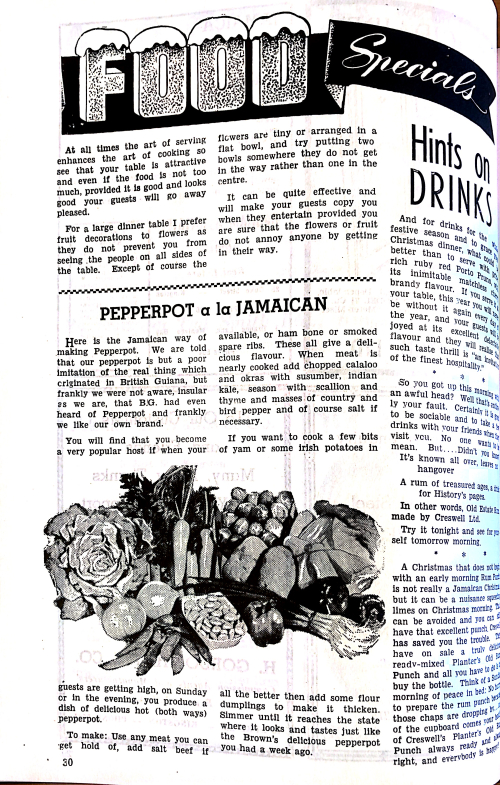 ‘a language that we can virtually all communicate with, even without speaking’

Attuned to the variance and connectivity that encompasses the Caribbean region, Hazel compares Guyana’s ‘racing rivers’ to the island nations of the region that have ‘beautiful beaches and blue water.’ Whilst highlighting the distinctiveness of Guyana as a mainland country, located on the South American continent, she believes that the ‘roots are virtually the same … we understand each other, we eat each other’s food.’ This understanding is the outcome of the region’s history, where all these societies have been profoundly shaped by the African diaspora. 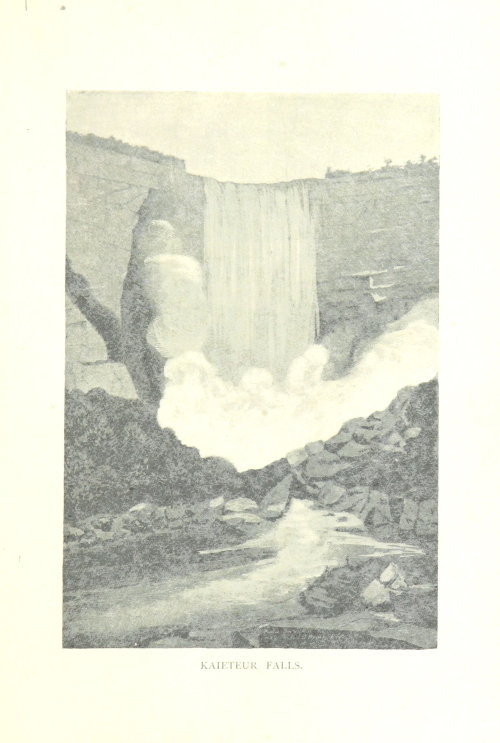 Experimenting in the Kitchen

Hazel moved to England in 1975 to join her husband, Omar Daniels, who was studying psychiatry at the Maudsley Hospital in London. Having trained as a radiographer in Guyana, she started working at King’s College Hospital. Upon moving to England, Hazel noticed that ‘the food was different,’ it lacked ‘that extra bit’ from the food she had grown up with – the wonders of fresh thyme, juicy tomatoes, papayas and garlic that smelt ‘to high heaven.’ Inviting her new colleagues round for dinner, Hazel would ‘try to create’ classic English dishes with ‘a little twist’ by adding a stick of cinnamon, sweet peppers or pomegranate molasses (that she likens to cassareep), which seemed revolutionary to her dinner guests who were bowled over by her food.

This playful approach to cooking, which contrasted with Hazel’s serious and accurate line of work as a radiographer, offered a feeling a freedom. Describing herself as a maverick in the kitchen, Hazel speaks about being ‘free to try new things’ without the constraints of a cookbook or scales. Always inspired by other cuisines, Hazel’s food has been influenced by the aromas and textures of Egypt, where Omar received a scholarship to study medicine (and her paternal grandfather had fought for the British army). Talking me through her favourite meals, she describes cooking melting lamb and rice with almonds and fruits, a dish that is traditionally eaten for Iftar, when Muslims break their fast during Ramadan. From roast beef and tagines to plant-based stews, Hazel’s repertoire captures her open spirit and tastebuds that are always trying to create not only tasty, but beautiful looking dishes. 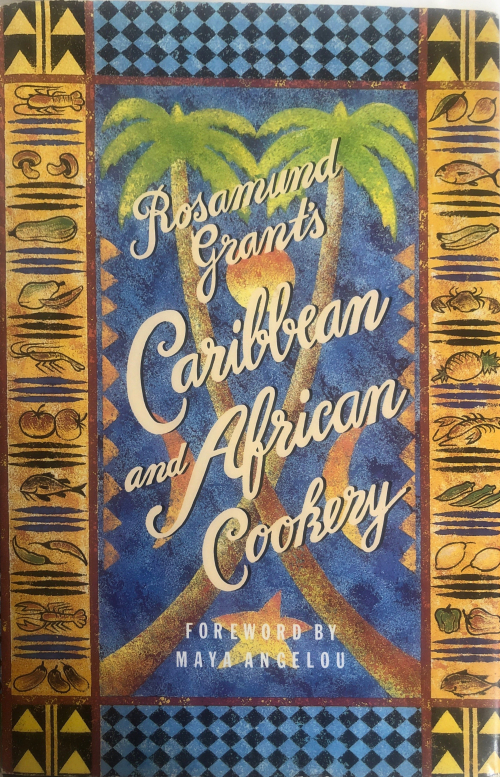 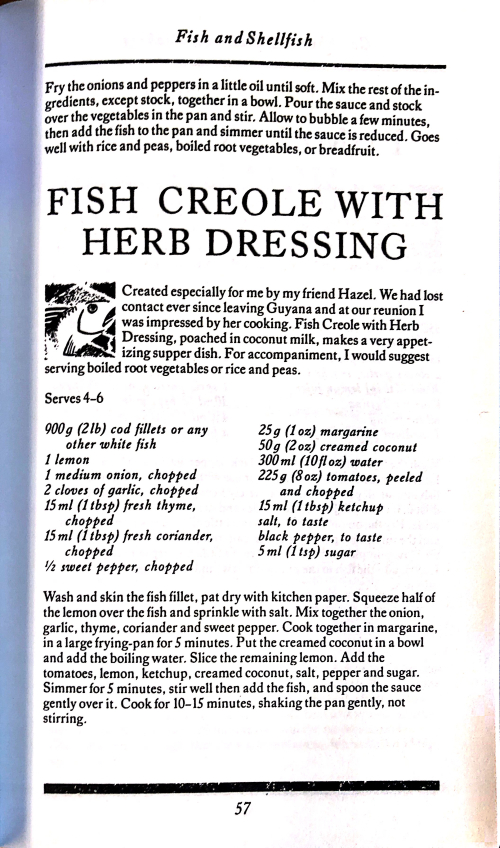 Whilst not one for using recipes, Hazel’s ‘Fish Creole with Herb Dressing’ features in Rosamund Grant’s landmark cookbook, Caribbean and African Cookery. Published in 1989, with a foreword by Maya Angelou, it was one of the first Black-British authored cookbooks about Caribbean food. An old friend of Grant’s, the two attended primary school together in Georgetown. Meeting up at her legendary North London restaurant, Bambaya, Hazel reminisces about the joys of eating at a restaurant that served ‘all the food that we remembered.’ As Grant explains in her own oral history with the British Library, ‘Europeans tend to see Caribbean food in a particular way,’ for example, it is stereotyped as ‘spicy’ or ‘exotic.’5 In defiant response to this, Grant stated ‘I will define who I am and I will define … what I’m cooking.’6 Much like her schoolfriend, Hazel has forged her own personal and culinary path.

‘food is so much more than sustenance’

Given her lengthy career in healthcare, it is, perhaps, unsurprising that Hazel's food philosophy is embedded in a belief that food is a ‘preventative medicine.’ Throughout the interview, she often highlights the mineral and vitamin qualities of certain ingredients, such as getting magnesium from avocados, nuts and raisins. Much like this page in the health section of a West Indian cookery book, Hazel has wide-ranging knowledge of food’s nutritional value, which was partly shaped by her parent’s emphasis on maintaining a balanced diet and eating well. 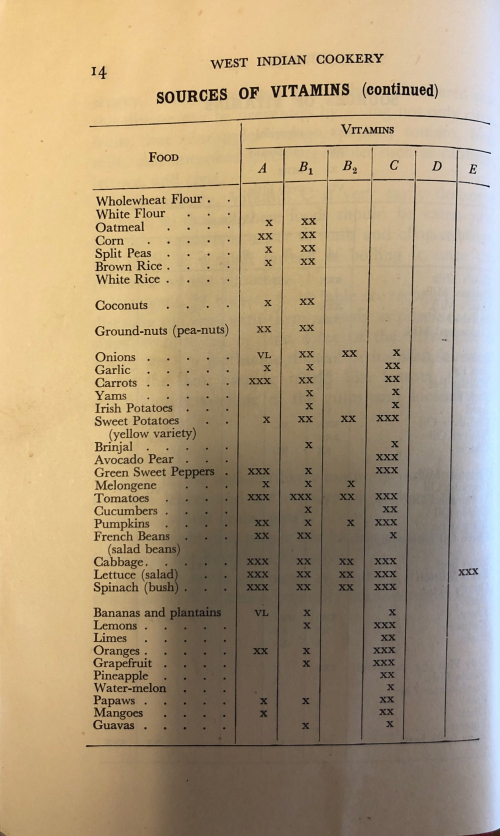 As Hazel sets out in her philosophy, ‘culture and food are integral to the sense of identity … of every human being.’ Food has shaped Hazel’s life profoundly and that of her children, to whom she has passed down an adaptable Guyanese culinary heritage that lives on through the spices that they rub, coat or add to food. As the last blog in the Caribbean Foodway series, I think that Hazel’s food philosophy is the perfect note to end on, as it encompasses the centrality of food in the politics of health, community, history and identity formation. In the words of the remarkable Hazel Daniels … ‘it’s what defines us all and brings us all together’!

I will leave you all with Hazel’s recipe for a classic Guyanese pepperpot, which she has generously shared. The Caribbean Foodways series may be over for now, but I invite you all to continue your exploration of Caribbean cooking by trying out the recipes shared in these blogs by our wonderful participants. Whether it is Ranette Prime’s Trini Phoulourie, or Ann Husband’s Green Banana Salad, tweet us with photographs of what you’ve cooked @BL_EcclesCentre! 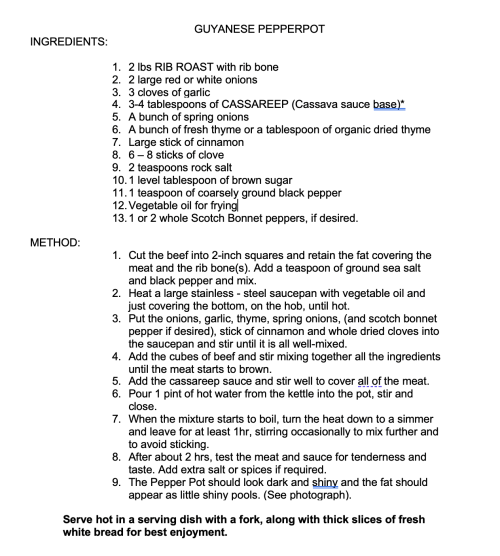 Thank you Hazel Daniels for sharing your memories and thoughts with me.

Read the previous blog in the Caribbean Foodways series – Rod Westmaas: A Hotchpotch of History and Hospitality

Posted by jean.petrovic@bl.uk at 6:14 PM