Inspired by the 'Inheritance Tracks' feature on Radio 4's Saturday Live programme, the European and Americas and Oceania teams have been looking at items in the British Library’s holdings that they loved inheriting during their time curating and cataloguing collections, alongside the items they have been responsible for acquiring for future generations’ inspiration, research and enjoyment.

One of my areas of interest is Gothic literature and, more specifically, the American writer Edgar Allan Poe. I think I must have been about 16 when I first encountered Poe; my English teacher introduced our class to the short story, ‘The Tell Tale Heart’. Ever since first reading that work, I have been fascinated not just by Poe’s stories, which were like nothing I’d come across before, but I was also increasingly intrigued about Poe’s life and literary persona.

When I joined the Americas team, I was informed that the Library held a first edition of Tamerlane and Other Poems (Boston: Calvin. F. S. Thomas, 1827, C.34.b.60.), the first published work by Poe. It’s believed that only around 12 copies of the collection still exist today. I had never heard of the book before but quickly discovered that rather than including Poe’s name anywhere on the publication, it was authored under simply, ‘A Bostonian’. Perhaps this is why I’d missed it over the years. The short collection of poems was first published in 1827. Poe would have been only 18 at this time, and it was in this year that he left his foster family and moved to Boston in search of work. Including themes of love, death, and pride, the collection received almost no recognition during Poe’s lifetime. 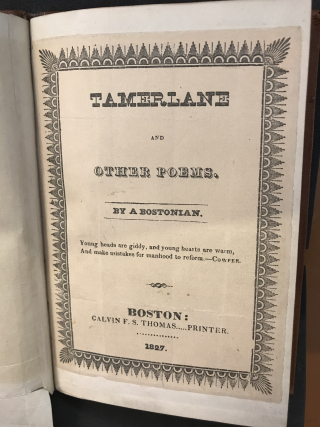 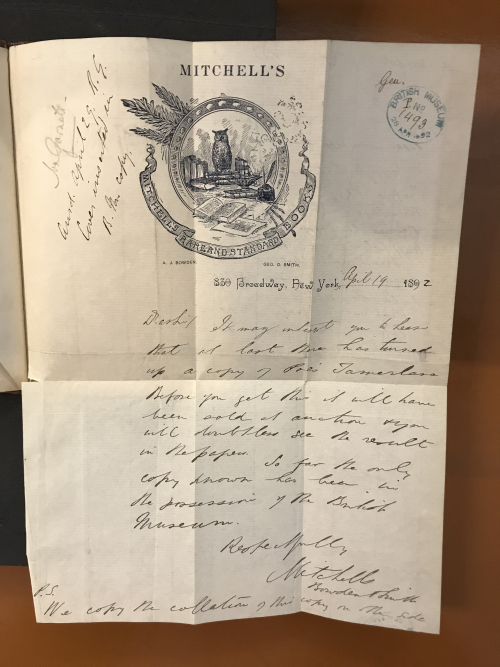 ‘It may interest you to hear…’: photograph of one of the attached letters in the Library’s copy of Tamerlane and Other Poems

What can be suggested from reading the contents of the letters is that these were possibly penned when another supposed first edition of Tamerlane and Other Poems had been discovered in America. Until the late nineteenth century, it was believed that the only known copy of this title was this one then held at the British Museum. The letters contain information about pagination; the presence of which would allude to the idea that someone was trying to verify whether a copy that had surfaced was real or a fake – using the British Museum’s copy as a reliable guide. 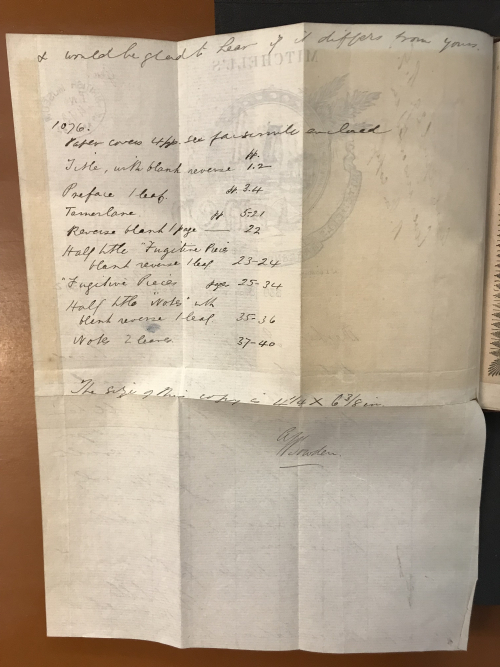 Though an unassuming looking item (only a facsimile front cover is included on the copy the Library holds), I felt so lucky to be able to hold this book, one of the rarest first editions in American literature. This was the first printing of the first publication from an author that had played a part in almost every stage of my educational and professional life, and to be able to see a little bit of history unfold in the letters enclosed in the Library’s copy made the experience even more special. It’s amazing to think that I’m just one in a long line of Poe enthusiasts that have, and will, pore over this item during its lifetime at the British Library.

Released on 10 September 2019, Margaret Atwood’s The Testaments was one the most highly-anticipated publishing moments in history. The sequel to her 1985 dystopian novel, The Handmaid’s Tale, The Testaments is set 15 years later and told from the perspective of three different women as they reflect on their knowledge and experience of, or lack thereof, the regime in Gilead.
The release of The Testaments was not just a literary moment in history, but a cultural one. The issues raised in The Handmaid’s Tale during its’ 35 years of circulation have been a topic of conversation around the world in book clubs and beyond; even the red coat and white blinkered bonnets of the Handmaid’s have become a silent yet powerful symbol synonymous with campaigns for equality for woman employed by political activists today. Visitors to British Library exhibition Unfinished Business: The Fight for Women’s Rights can see one of the said costumes from the Hulu TV series on display. 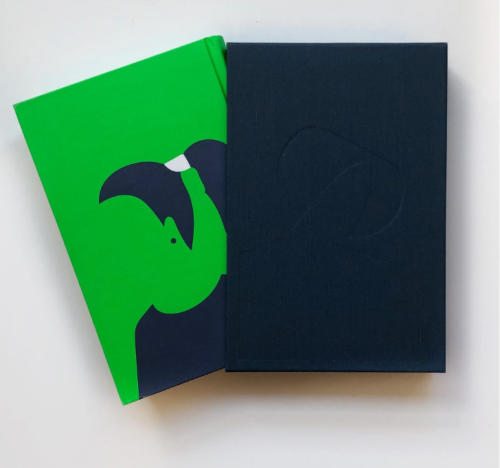 Special edition of The Testaments (2019) from Pelee Island Bird Observatory

Along with many others, I was really excited to read The Testaments. As this was such a literary milestone, not just for North American literature, but globally, I was able to acquire a special edition of the 2019 Booker Prize-winning novel to help enhance the Library’s collections. The exclusive slip-cased edition of three hundred, features Atwood’s signature, decorative endpapers, and hidden ephemera, and was available through Pelee Island Bird Observatory (PIBO) – PIBO is a non-profit charitable organisation devoted to the study and conservation of birds in Ontario, Canada. One of PIBO’s founders and main supporters is Margaret Atwood. Inside each book is an envelope with a wax seal that contains artefacts from the text. 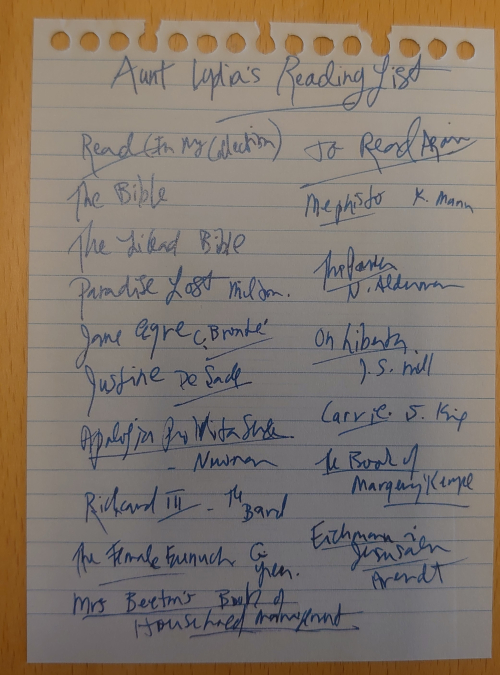 With the combination of beautiful presentation, additional content related to the story, and affiliation with a conservation project close to Atwood’s heart, I hope this edition will provide researchers with various elements to investigate on many different levels, in regards to both the novel’s and Margaret Atwood’s places in literary history, and their unwavering cultural impact, for years to come.

Due to delays experience resulting from the COVID-19 lockdown, this item is currently being processed and will be available in Reading Rooms in due course.