Two Conflicting Pioneers and their Precursors in the Amazon

This blog by Pola Oloixarac is part of a special Summer Scholars blog series highlighting recent research across the British Library's Americas collections by scholars and creatives associated with the Eccles Centre, including those supported by the Centre's Awards.

Travel has changed a lot since the early naturalists voyaged through the Amazonia, and it continues to change today thanks to Covid restrictions. While I’ve been unable to foray in person into the archives of the British Library as I was hoping - summer, London, arcane tomes - I’ve had the luck of encountering the mighty digital explorer, Dr Aleksandra Kaye. Dr Kaye knows her way around the British Library’s vast digital  archives and like any sensible 19th century naturalist seeking help from a guide, I secured her expertise in unearthing their intricate holdings.

In the first written accounts of the Amazon, the anthropological gaze is under-developed. Though entranced by the power of landscape, the earliest naturalists typically didn’t consider the human culture they encountered. The richness of the human Amazonian world typically escape their notice. Indeed, where Amazonian people are referenced, early accounts by European naturalists are explicitly racist. One explorer, however, who did take some account of indigenous people was the French painter Hercules Florence, although how he saw them was problematic. He travelled to the Amazon from 1825 to 1829 and ended up spending his life in Brazil.

What excited Florence was undiscovered places and he was uninterested in indigenous village life. He remarked in his diary that the jungle is repetitive and that, "to see a Brazilian village, is to see them all"1. He became obsessed with capturing the unchartered territory and capturing it through sound and image with pioneering technology. Florence experimented making photographs in Brazil in 1833 and wanted to record the sounds of what surrounded him. This led him to devise a method to record wild bird song in the Amazon. While looking for a way to record sound, he stumbled into photography. Indeed, while trying to publicise his experiments in sound recording he managed to devise the first printing machine in Sao Paulo.

In the first page of his diary he mentions the expedition slaves, noting that all humans become the same bundle of flesh under the severity of the Amazonian environment. When the expedition’s commander, Gregory Langsdorff (Fig. 1, below) succumbs to yellow fever, Florence notes that illness made no distinction about social class in the context of the Amazon. 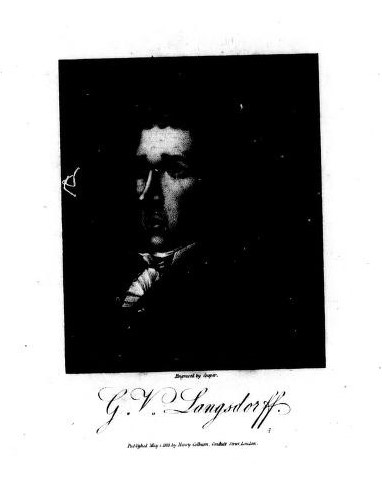 Langsdorff claimed to be the first to attempt the fluvial crossing of Brazil, from Pantanal to Belum. Until now it was believed that the first trip was in 1825 but Dr Kaye’s research has revealed a precursor: there was a previous trip funded by the Imperial Russian court and led by Adam Johan Krussertern in which Langsdorff took part. Before his trip with Florence in 1825, Langsdorff had added himself hastily and at his own expense to the Krussertern expedition as a second naturalist (the first was Wilhm Gottlieb Tilesius). Langsdorff, therefore, went into the Amazon at least two times, around 1803-1807.  These earlier expeditions could explain why the subsequent Langsdorff trip a few decades later was hardly noticed by the very Russians who funded it, considering it, perhaps, redundant. Indeed, the reports of the Langsdorff investigation languished in St Petersburg for over a century largely undiscovered.

Langsdorff’s story is a reminder of how much these exploratory naturalist expeditions had in common with modern filmmaking. Langsdorff had, in effect, been to the Amazon first as a location scout (1803-1807), but his vision of the Amazon and the legacy of his expedition could not exist without artists to document the trip. For his 1825-1829 expedition - the one that would make him famous - Langsdorff only wanted the very best artists. He hired Johan Moritz Rugendas, but their relationship faltered when the Prussian commander sought to take ownership of the artist’s original works. Rugendas, however, was aware of his own worth as an artist and would not bow to Langsdorff. The Brazilian diaries of both Rugendas and Langsdorff paint the latter in a negative light: Langsdorff was controlling and wanted Rugendas to assign him copyright, but the artist resisted and ultimately deserted the expedition.

This is how Hercules Florence joined the trip as a second painter to first painter André Taunay. Traveling with Langsdorff, Hercules Florence experimented with photography (he called it “painting with light”). He claimed to be its first inventor, documenting his attempts using silver nitrate and natural acids like urea. Despite these claims, however, Dr Kaye found that Alexander Agassiz, also claimed to be the first to use photography through carbon printing for general illustrations of natural history. In 1871 Agassiz made this claim in the pages of the Bulletin of the Museum of Comparative Zoology at Harvard College (British Library shelfmark Ac.1736/26), where his father, Louis Agassiz, was an acclaimed professor. Agassiz argues that photography is likely to overtake lithography as a mode of illustrating natural history and includes two photographs with his work. His view that the new printing technology would withstand the test of time is born out by the archive; and 150 years later, we can look at these photographs at the British Library. 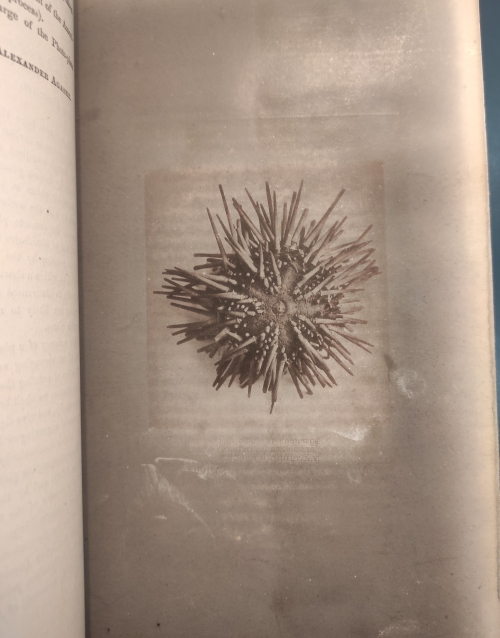 Did Agassiz know of Florence’s efforts to make pictures by “painting with light”? Or was Florence unknown to his contemporaries, even those working as naturalists in Brazil? These questions beg answers. For now, we can only reflect on the fact that the London edition of the early Langsdorff travels (before his trip with Florence) is much more richly illustrated and complete than the American version. In the UK edition we find a lithograph of a Brazilian house (Fig. 3, below) and a musical score called “Brazilian Air” (Fig. 4, below). Both are accessible digitally, which makes comparing them possible. The US edition from 1817 has been digitized by the British Library and is in the public domain - the UK edition from 1813 is only available digitally inside the library, but the University of Alberta digitized their copy and made it publicly available. The London edition was published in two separate volumes, while the US edition has less images, is more cramped and in smaller format and is published as a single book. As a consequence the US edition would have been cheaper to produce and therefore more accessible to bigger audiences. 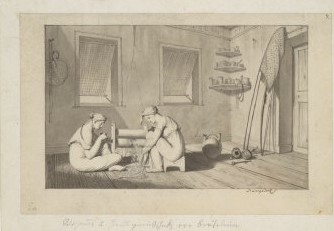 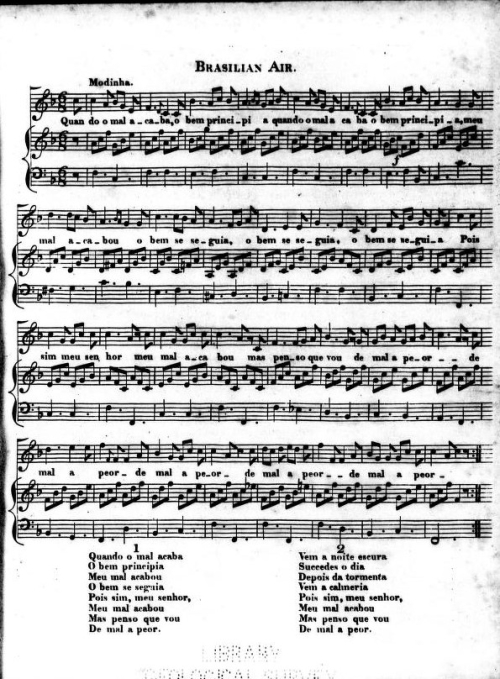 Another interesting item with connections to Brazil uncovered by Dr Kaye is a 1916 book of short stories by Edith Wharton, the American author, called Xingú, and Other Stories (London; New York printed: Macmillan, 1916; British Library shelfmark NN.4057). The “Xingú” text portrays a dialogue between elite ladies who cannot fathom what is meant by Xingú. They think Xingú is something mysterious or rude, which creates quite a lot of drama among them. Eventually they discover it’s a Brazilian River. The text keeps you wondering, what would The Age of Innocence (Mrs. Wharton’s vivid masterpiece) be like, if set in the Império do Brasil? A crossover of the directors Martin Scorsese and Joaquim Machado de Assis, with vast corridors of palms, would surely depict a young emperor obsessed with becoming a masterful photographer, like Dom Pedro II of Brazil once was. He would have been especially pleased about finding the British Library's digital versions of his photographs available today.

Pola Oloixarac is the author of the novels Savage Theories, Dark Constellations and Mona. She’s the recipient of the 2021 Eccles Centre and Hay Festival Writer's Award.