“We Must Speak with Our Bodies”

This blog by Louise Siddons is part of a special Summer Scholars blog series highlighting the recent research scholars and creatives associated with the Eccles Centre, including those supported by the Centre’s awards, have undertaken across the Library’s Americas collections. 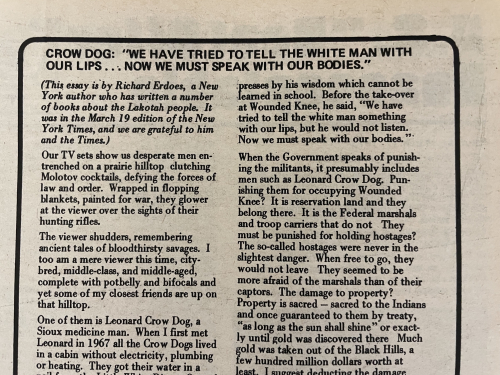 I first started working with the Mohawk-produced newspaper Akwesasne Notes while I was a Summer Scholar at the Eccles Centre in 2018. I was researching an article about intersectional visual politics and the representation of the 1973 occupation of Wounded Knee in its sister publication, The Black Panther—now available in the Summer 2021 issue of American Art.i Along the way, I collected examples of Native assertions of cultural sovereignty from the newspaper, setting them aside for future consideration. I’ve been back at the Eccles Centre as a Fulbright scholar this spring, and have taken the opportunity to follow up on some of those notes from a new vantage point.

Recent news has turned mainstream attention to the horrific histories of Native American and First Nations children at boarding schools in Canada and the United States. Long seen as tools of colonial assimilation, we increasingly understand the part they played in North American genocide throughout the nineteenth and twentieth centuries. Enrollment in boarding schools peaked in the 1970s: in 1973 it was estimated that 60,000 Native American children were in boarding schools in the United States. The devaluation of Native lives and culture was systemic and diffuse: resistance to it had to be equally comprehensive in order to succeed. In the 1970s, self-fashioning became one way among many that Native activists called attention to the structural undermining of Native identity and cultural sovereignty in educational institutions.

The American Indian Movement (AIM) was founded in 1968 by young activists who had participated in a variety of earlier organizing. Although the most well-known AIM actions were the 1972 Trail of Broken Treaties caravan that led to the occupation of the Bureau of Indian Affairs (BIA) headquarters in Washington, DC, and the 1973 defense of Wounded Knee, the organization was active across the country at every level. From their beginnings, AIM leaders celebrated the “outer, visible Indian.”ii The “outer Indian” was a politically engaged, educated Native person who understood their Indigeneity in racial/ethnic, as well as cultural, terms. It also had a literal meaning: AIM members celebrated their politicized self-fashioning as an act of resistance against a white assimilationist establishment, a tool for pan-Indian coalition-building, and a strategy for being seen by mainstream media and audiences.

AIM leaders defined a very specific look for Indian activism that began with long hair. They pointed to the ways in which Indian identity had been attacked by the federal government through the regulation of individual appearance, focusing particularly on the targeted assimilation of children in boarding schools throughout the nineteenth and twentieth centuries. In a 1973 interview with Akwesasne Notes, Carter Camp (Ponca) summarized the history of American education of Native Americans. 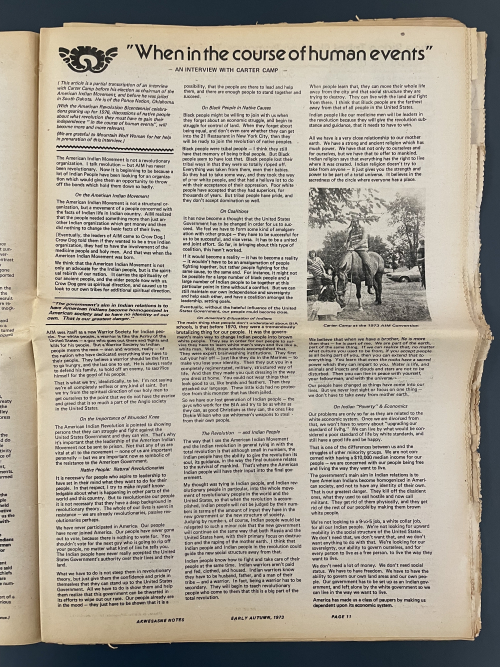 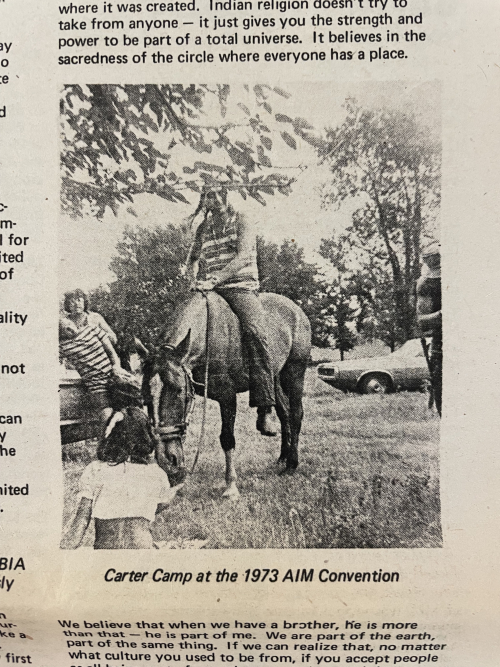 “They first cut your hair off,” he began, “just like they do in the Marines—to make you lose your identity.” Carter’s military reference was no coincidence, as many AIM members were Vietnam veterans who condemned the war in Southeast Asia as another colonial enterprise, as driven by racism as it was by anti-communism. Camp continued: “These little kids had no protection from this monster that has them jailed. So we have our lost generation of Indian people—the guys who work for the BIA and try to be as white as they can.”iii As Camp’s statement implied, Native people, like all people, expressed community, cultural identity, and spiritual beliefs through clothing, hairstyle, and other elements of regalia and adornment. When the United States government (and other organizations, such as churches, which also ran boarding schools) forced young Indians to cut their hair and dress in school uniforms, they were fully cognizant of its negative impact on the children, their families, and communities. Nonetheless, they proudly published “before” and “after” photographs as evidence of their success in destroying Native cultures. When members of AIM and other youth activists let their hair grow long and adopted elements of traditional regalia in their dress, they were asserting individual and cultural sovereignty and also calling attention to the schools’ atrocities.

Long hair was a gendered issue—no one cut girls’ hair against their will—and so the fight over long hair was in part a fight over Native masculinity. Perhaps unsurprisingly, AIM’s leadership was dominated by men, and the emergent trope of the Indian militant did not have much space for women, despite the fact that they were politically active across the continent. As activist Russell Means (Oglala Lakota) put it, the American Indian Movement offered its members “a new way to express our manhood,” in a statement that seemed to equate “Indianness” explicitly with masculinity.iv And yet coverage of AIM actions included many photographs of Native American women in bell-bottoms and other period fashion, as well as wearing Pendleton blankets, and framed with imagery that contextualizes and encourages an equally politicized reading of their long hair. Like many of the civil rights movements of the late 1960s and early 1970s, in other words, the American Indian Movement struggled with gendered expectations for its members.v

Boarding schools were not their only targets. At its 1973 convention in Oklahoma, AIM called for a “national boycott of public schools which forbid native boys from wearing long hair”. 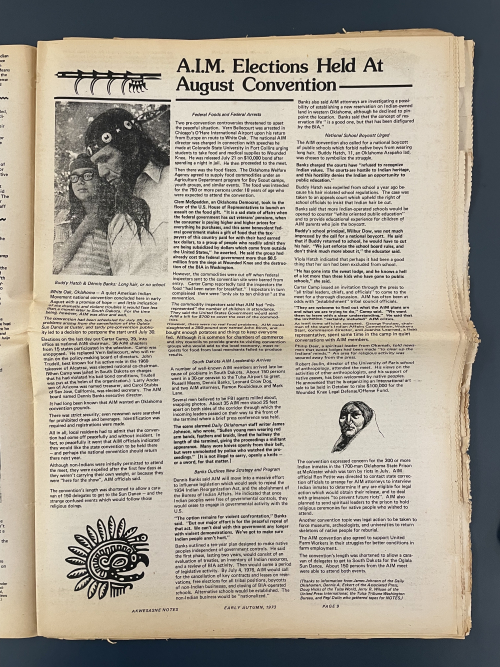 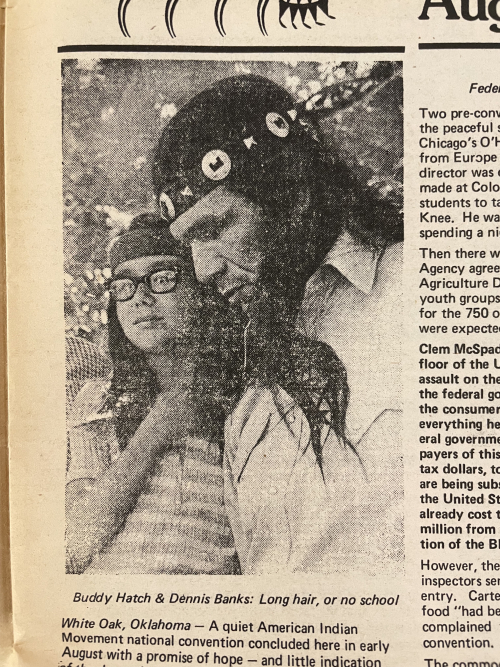 “Buddy Hatch, 11, an Oklahoma Arapaho lad, was chosen to symbolize the struggle. ... Hatch was expelled from school a year ago because his hair violated school regulations.”vi When an appeals court upheld the school’s regulations, AIM leader Dennis Banks (Ojibwe) deplored its refusal “to recognize Indian values. The courts are hostile to Indian heritage, and this hostility denies the Indian an opportunity to public education.”vii For Native people, regulations about hair length weren’t just about censoring individual self-expression. They represented centuries of colonial oppression, and therefore allowing one’s hair to grow long was a potent and highly visible symbol of political resistance. When he was recruited by AIM in 1969, Means “started growing his shoulder-length hair out so he could emulate others in AIM by wearing braids.”viii Similarly, an anonymous member described the moment in which he became involved with AIM: “I was assimilated into the mainstream of White America. And I was disenchanted. There was always an emptiness inside me. ... So I went up to Minnesota, and for about a week I visited with my brother and other people in the movement... Finally I got so involved I started letting my hair grow long, and I stopped wearing a tie and started to sort of deprogram myself, to become just a simple person, a simple man.”ix Although some participants later disavowed the stereotypical elements of AIM self-fashioning in this period, this desire to “deprogram” himself—today we might say decolonize— lends ideological weight to the self-transformation of AIM members across the board.

Louise Siddons is Professor of art history at Oklahoma State University and a Fulbright Scholar at the Eccles Centre for American Studies at the British Library. She is writing a book about the photographer Laura Gilpin that examines the intersection between mid-century lesbian liberation and Navajo sovereignty politics in Gilpin’s photographs and related visual culture.