The Masters of Margarita – Anglo-Spanish rivalry, treason and the slave trade

This blog by Rebecca Goetz (2018 Eccles Centre Visiting Fellow) is part of a special Summer Scholars blog series highlighting recent research across the British Library's Americas collections by scholars and creatives associated with the Eccles Centre, including those supported by the Centre's Awards.

In my work at the British Library in June and July 2019, I was particularly interested in documents from the late seventeenth-century Caribbean that might shed light on illegal and quasi-legal slave raiding and slave trading – moments when the evil but nonetheless completely legal (and indeed, highly regulated) trafficking in African and Indigenous American human life that we know as the Atlantic slave trades collided with the criminal or legal grey worlds of pirates and privateers. Jamaica was a particularly volatile meeting point between these different forms of maritime violence, trade and enterprise. The English seized Jamaica from the Spanish in 1655, and in the course of the next few decades, the newly-conquered island became a haven for pirates and privateers, and not coincidentally, a locus of the shadowy world of intra-European slave trading. I wanted to know how and where Europeans raided and traded for enslaved people, Indigenous and African alike. One paragraph in the records of the governor’s council of Jamaica caught my eye (Sloane MSS 1599). I had not expected to find such a vivid tale of extralegal slaving, Spanish-English rivalry, and treason against the English Crown in the British Library’s manuscripts collection – and yet here we were! 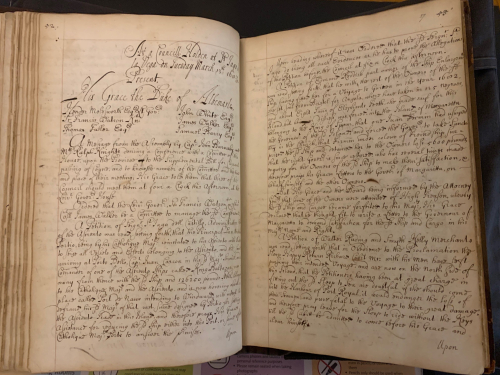 On 13 March 1688 , Captain Edward Reddish appeared before the council, asking for assistance in obtaining compensation from the governor of Margarita for the illegal seizure of his ship, the Inlargement, in 1682. The ship, which Reddish co-owned with several other business partners, was a slave ship carrying a cargo of 135 souls from Africa for sale in the English Caribbean. Reddish claimed he had difficulties with his ship, and so had put it at the island of Margarita to make repairs. The governor of Margarita, a man he named as Juan Fermín, seized the Inlargement and her cargo. Reddish told the council that “Firmin under the colour of freindship surprized the sd ship and detained her to owners loss of 5600 pounds.” Reddish went on to say that Fermín was not the legitimate governor of Margarita; Fermín had usurped that power from the duly appointed governor of the island and forced him to “take sanctuary in the Church.” Reddish understood that the rightful government on Margarita had been restored and wanted the council’s assistance in reclaiming his property or in winning restitution.

This short paragraph attracted my attention because I could not imagine what legitimate business an English captain might have on Margarita, a tiny island off the coast of what is now Venezuela, over 1,500 km away from Jamaica at completely the other end of the Caribbean Sea. The Spanish had claimed mastery of Margarita since the mid-1520s, when they were busily laying claim to the southern Caribbean and its rich pearl beds. Margarita and its sister islets, Coche and Cubagua, were centers of the Spanish pearling industry from the 1520s to the 1540s. Even as early as the first decade of the 1500s, Margarita, Coche, Cubagua, and the nearby mainland were also centers of Spanish slaving of Indigenous people. By the later sixteenth century, Margarita had reinvented itself not as a pearling space but as a locus of a vigorous, informal, and often illegal trade in enslaved Indigenous people from the interior of South America. Margarita was an entrepot providing extralegal and untaxed access to enslaved people to other Spanish islands as well as Cartagena and Spanish settlements in central America. In the 1590s, Walter Ralegh noted a well-established slave trade in the Orinoco River basin; he described canoes full of captive Indigenous women bound for sale as slaves on Margarita. Almost a century later, Margarita remained part of an informal trading and slaving network that included English settlements in Guyana, Dutch settlements at Essequibo, and Curaçao. It seems unlikely to me that Reddish had such serious trouble with the Inlargement that he ended up at Margarita by accident. Instead, I suspect Reddish thought he could get a higher price for his enslaved cargo in Margarita than in Jamaica and he could evade English regulations and taxes while he was at it. 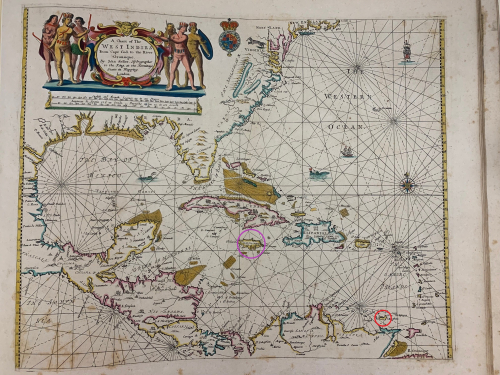 'A Chart of the West Indies, from Cape Cod to the River Oronoque', in J. Seller, Atlas Maritimus (London, 1675). Maps 7 TAB.77. Jamaica is circled in purple; Margarita is circled in red. 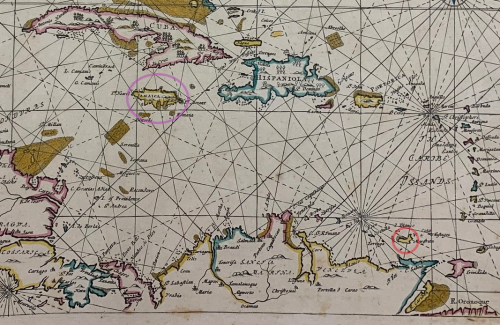 Detail of 'A Chart of the West Indies, from Cape Cod to the River Oronoque', in J. Seller, Atlas Maritimus (London, 1675). Maps 7 TAB.77. Jamaica is circled in purple; Margarita is circled in red

What Reddish did not expect was political chaos on Margarita. Juan Fermín de Huidobro was born on Margarita but had spent his career in various Spanish-controlled locales around the southern Caribbean, including posts on Trinidad and in Guyana. His varied career suggests to me he would have been broadly familiar with informal trade in enslaved people, foodstuffs, and commercially valuable products such as annatto (an orange-red condiment and natural dye derived from the seeds of the achiote tree), tobacco, and sugar around the southern rim of the Caribbean. In 1677 he was appointed military commander in charge of fortifying the island and the nearby mainland against attack from the Dutch, English, and the Kalinagos of the Lesser Antilles. Fermín had a falling out with the civil governor of the island, Juan Muñoz Gadea, and the two spent the decade of the 1680s sparring in court at the Audiencia of Santo Domingo, in the Council of the Indies, and periodically launching rebellions against one another on the island. The saga came to a conclusion finally in 1689 when Fermín died.

Reddish clearly believed he could get compensation for the cargo of enslaved people Fermín seized from Muñoz. But the English governor of Jamaica, Christopher Monck, Duke of Albemarle, had other ideas. When Reddish brought his petition to the Council, Albemarle pointed out that some of the owners of the Inlargement had been “attainted for treason whereby the sd ship and Cargoe became forfeited.” The Council voted to write to the governor of Margarita and ask for compensation in the King’s name instead of Reddish’s. I imagine that Reddish’s business partners might have been involved in Monmouth’s Rebellion in 1685, the unsuccessful uprising of several leading Protestant against the Catholic King James II, who was still on the throne at the time of Reddish’s petition (although I do not yet know for sure who they were). Reddish left the council empty-handed.

While I can flesh out the story of Reddish, the Inlargement, and political hijinks on Margarita, there is less I can say about the 135 enslaved people seized. Their “final passages,” as the historian Greg O’Malley would term them, were not recorded in the archives of Spain or of England. Illicit trading and tax evasion made it imperative for smugglers trading in enslaved people to avoid official notice—and thus details were not recorded in imperial archives. Some of these enslaved people might have remained on Margarita as pearl divers. Others might have been sold to planters in Cumaná’s nascent sugar economy. Some might have ended up in Cartagena, and others still might have been sold in Dutch, French, or English territories. Their voices and stories are lost amid tales of interimperial rivalry and treason.

Posted by jean.petrovic@bl.uk at 3:19 PM