The Eccles Centre at 30

The Eccles Centre for American Studies was formally opened in November 1991. In this blog its newest member of staff – Polly Russell, Head – and its most long-standing – Jean Petrovic, Bibliographical Editor – reflect on the Centre’s development over the past three decades.

Last month, in a meeting at the British Library, Catherine Eccles gave me a few papers she had discovered relating to the early years of the Eccles Centre. These included this copy of the speech given by David Eccles at the Centre’s official opening in November 1991: 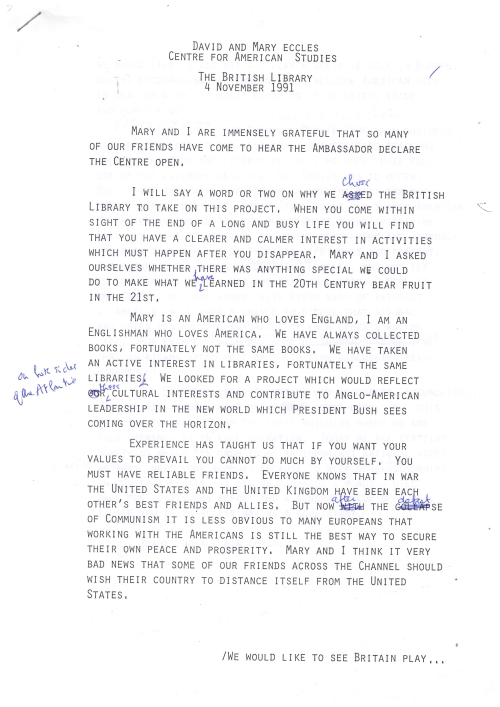 Notes for the speech by Viscount Eccles at the formal opening of the Eccles Centre on 4 November 1991; page 1. 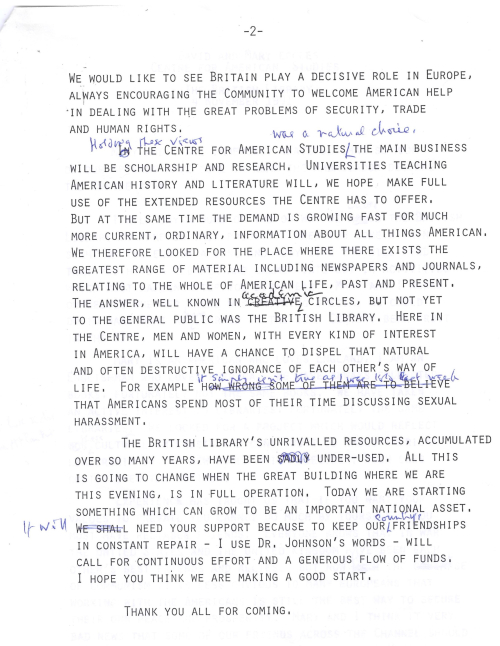 Notes for the speech by Viscount Eccles at the formal opening of the Eccles Centre on 4 November 1991; page 2.

The speech is a heartening reminder of the principles and ambitions which have underscored the three decades of the Centre’s existence. Although the Centre’s team and activities have expanded significantly, David and Mary Eccles’ commitment to partnership, exchange, scholarship and research remain at the heart of the work we do. Since Lord Eccles officially opened the Centre, surrounded by the scaffolding and building materials of the yet unfinished British Library, the scope of the Eccles Centre has expanded beyond the USA, but fostering better understanding of the Americas through the British Library’s unique collections remains at the heart of what we do. Indeed, it is arguably more urgent than ever. From the environmental crisis and the challenge to liberal democracy, to new historical understandings of race, colonialism, migration and global trade, the Americas play a key role. As the newest member of the Eccles Team – I started this time last year – I would like to take this opportunity to pay tribute to the Eccles family, colleagues past and present and our many friends, partners and stakeholders for building on the generous vision set out by David and Mary Eccles and for helping to keep the conversation about the Americas very much alive, vibrant and relevant at the British Library.

I love how David’s short but powerful speech so brilliantly captures the energy and vitality of David and Mary themselves. Both were well-advanced in years when I first met them in 1992, but their youthfulness of spirit – and their determination to make the most of every day – was inspirational. I quickly learned that David had proposed to Mary on his 80th birthday. And Mary’s ‘diary’ – which was in fact more like a wall-calendar – was enough to show anyone that life is for living. I initially caught a glimpse of it while we were planning what became the Bryant Lecture. Every day was divided into morning, afternoon and evening and each of these time-slots was packed with functions, meetings and activities. I was 27 at the time and such scheduling put my own life to shame!

I’m also struck by David’s comments about friendship and the need to work with others if we are to achieve anything of lasting value. From its inception, the Centre has reached out to other organisations and other people. Initially this outreach was limited to a couple of scholarly societies, the US Embassy and Canadian High Commission, the American Studies Library Group and our immediate curatorial colleagues. Slowly but surely, however, this network has grown deeper, broader and richer. It is not an exaggeration to say that almost all of the Centre’s work today is, in one way or another, the result of dialogues and exchanges, both with our generous and insightful internal colleagues – from Maps to Manuscripts, and Learning to Events and Research Engagement – and with our inspirational external partners, our Writers and Fellows, and a huge array of scholarly associations, research groups and interested individuals. 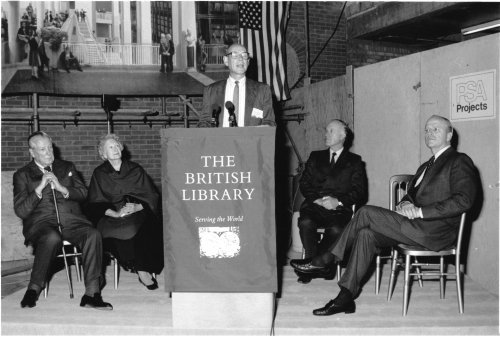 All of these collaborations would have delighted David and Mary, as would the Centre’s dedication both to its “main business” of scholarship and research as well as to sharing insights about “all things American” with the general public, including with school teachers and pupils. While Bob Burchell, the first Head, solidly committed the Centre to the former, it was Phil Davies, his successor, who ensured that non-academics – “men and women, with every kind of interest in America” – could benefit from Eccles activities. During Phil’s tenure, the Centre hosted hundreds of events on every aspect of American history, life and culture. And the Centre’s Congress to Campus programme – which Phil created and which is now in its 19th year – has brought around 20,000 A Level politics students into conversation with nearly 40 former Members of Congress.

Regarding the Library’s truly extraordinary Americas collections, David was absolutely correct to note in 1991 that these had been underutilised. Thankfully, this is no longer the case: partly due to the exceptional work of our Americas curatorial colleagues and the Centre’s bibliographic guides and research training sessions, but also to the ever-evolving programme of Eccles Fellowships and Awards. Under Phil Hatfield, the Centre’s third Head, not only did the Visiting Fellowships expand to include creative practitioners as well as scholars, but the Eccles Writer’s Award gained an amazing partner in Hay, thereby expanding its remit to include Latin America. Each of these steps has widened the network of those who know about – and can therefore benefit from – the Library’s holdings. 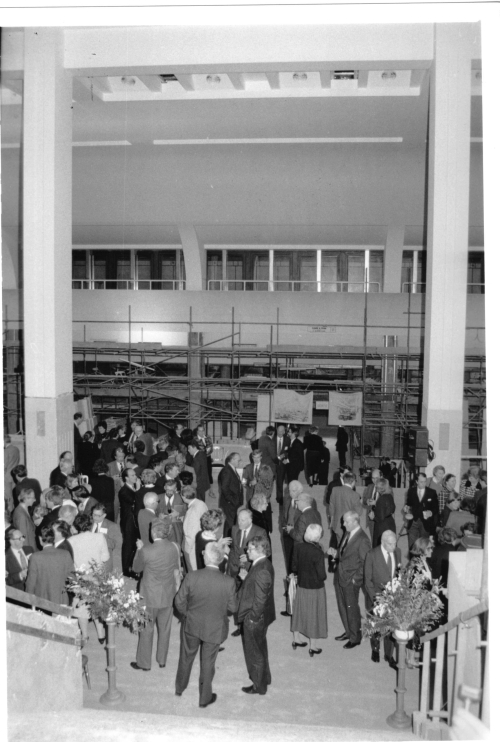 The formal opening of the Eccles Centre on 4 November 1991; the Library did not move into this building at St Pancras for another six years, so enormous heaters were hired in order to keep guests warm in the unfinished building!

As a slight aside to the work of the Centre – but still connected to David’s message – it is interesting, if somewhat depressing, to note that conversations about gender and sexual harassment – which in 1991 were prompted by the case of Anita Hill and Clarence Thomas – are still on-going, on both sides of the Atlantic. Likewise, Britain’s relationship with the United States, Europe, and the rest of the world is ever-changing and worthy of attention.

Finally, and on behalf of everyone connected with the Centre – past and present – I would like to pay tribute once again to the incredible energy and open-heartedness of David and Mary Eccles. We are truly grateful for their passion and generosity and for their determination to create something “special” that would bear fruit after their “disappearance.” We hope – and trust – we are making them proud.

Posted by jean.petrovic@bl.uk at 3:18 PM