With COP26 now over in Glasgow, I have looked to the Library’s Oceania collections for examples of book artists tackling some of the themes under discussion by world leaders during this crucial conference. The items selected use creative responses to recollect, witness, and foretell the impact of climate change in the Oceania region and beyond.

A primary goal of COP26 was to secure global net zero emissions by the middle of this century and keep the target of limiting global warming to 1.5 degrees. Getting anywhere near to achieving this aim will require radical change and commitments from countries around the world to limit deforestation, phase out coal for renewable energy, and switch from petrol and diesel to electric cars. Allan McDonald’s 2017 photobook, Carbon Empire (YD.2020.b.233), documents petrol stations across New Zealand in different stages of transition. The photographs capture the effect of a change in petroleum laws which forced many independent stations out of business - weeds flourish where petrol pumps once stood, for sale signs replace advertising logos, and a full car park is more reminiscent of a graveyard than a sign of prosperity. And so, the images also offer a vision of a world where petrol stations have fallen out of use and lie abandoned to become rusting monuments of the past. 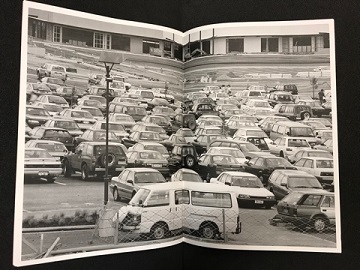 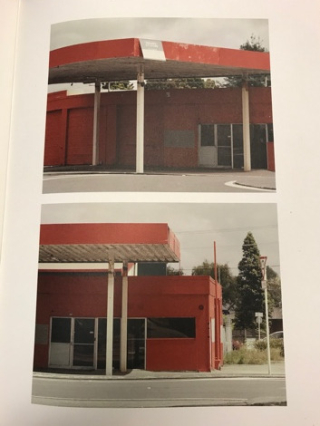 Our reliance on fossil fuels and its impact on Indigenous cultural heritage is explored in Clyde McGill’s monumental book, Witness (HS.74/2407). The Australian artist travelled to Murujuga (Burrup Peninsula), northern Western Australia to see the petroglyphs, or rock art, first created by the Aboriginal people of Murujuga over forty thousand years ago and added to continuously until the nineteenth century when this community of artists was eradicated through European colonisation. There are between 1-2 million petroglyphs depicting thylacines, megafauna, ceremonies, human faces, and geometrics on this site which is considered the largest continuous rock art gallery of its kind. Yet this part of northwest Australia is also home to massive iron ore, oil, coal, mineral and gas reserves, and when McGill visited prior to creating the book in 2016, this highly significant cultural heritage site was at risk of destruction from large-scale mining operations. Witness doesn’t attempt to document the petroglyphs, but rather records the artist’s experience of his visit to the sacred site through a collection of visceral and confronting paintings, handwritten notes, and performance. 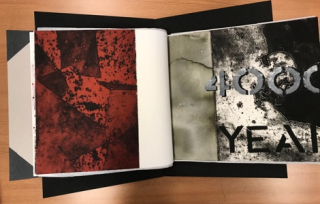 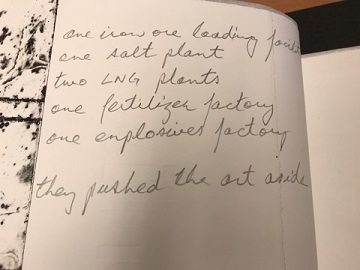 The damage wreaked by the extraction of fossil fuels is similarly interrogated in Stolen Waters (RF.2018.a.87), a collaboration between Australian book artists Marian Crawford and Peter Lyssiotis. This compact 2013 artists’ book examines the environmental damage to our waterways from mining. The names of major disasters are emblazoned on the pages including the BP Deepwater Horizon oil spill in the Gulf of Mexico in 2010, and the OK Tedi Mine disaster during the 1990s in Papua New Guinea. This accusatory typography is in stark contrast to the black and white images of a jellyfish suspended in a dark sea (or is it an oil slick?). 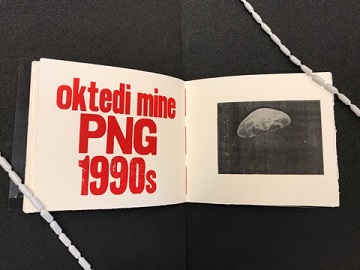 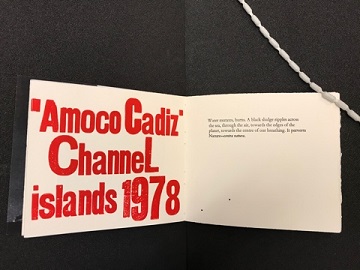 Picturing the Island by Marian Crawford

A further goal of COP26 was to protect the communities and ecosystems most affected by climate change, including the Pacific Island region; an early and increasingly visible victim of the climate crisis with much at stake in the outcome of COP26. Rising sea levels here are already contaminating fresh water supplies and agriculture, and threatening to engulf many of these small island nations, including Kiribati; a set of low-lying islands in the central Pacific Ocean. Artist Marion Crawford spent her childhood on the island of Banaba (previously Ocean Island), part of the nation of Kiribati where her parents worked for the British Phosphate Commission (BPC). The BPC managed the mining of the island’s phosphate resources until these were exhausted in 1979. The environmental impact of extensive mining has left the Banaba Islanders without fresh water sources and reliant on a desalination plant for clean water. Crawford’s 2016 photobook, Picturing the Island (RF.2017.b.99), uses colonial archival material, including text in Gilbertese and English and photopolymer prints, in juxtaposition with her own memories to reflect on the changes, including environmental damage, undergone by her childhood home. 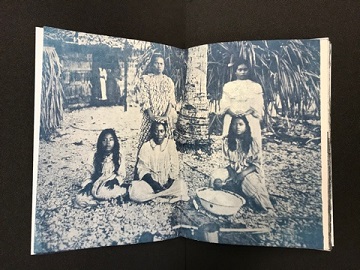 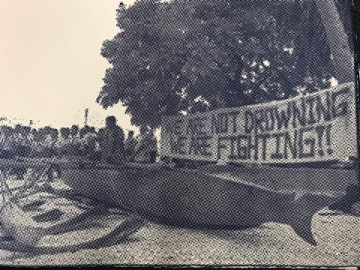 The topic of global warming and rising sea levels is similarly interrogated in Bronwyn Rees’ Miami Underwater. Rees is an Australian printmaker whose richly textured work explores landscape and wilderness, often depicting nature as an unforgiving force. Although her work is primarily focused on Australian landscapes, in 2014 she turned a city in the USA at the mercy of the encroaching sea to create Miami Underwater. This small handmade book has a strong environmental message and incorporates text extracts from Tony Davis’ Underwater Cities (2011). The varying sizes and texture of the pages require careful handling of this item by the reader, lending a feeling of vulnerability. The overall effect is of a portent; the book feels as if you have just retrieved it from floodwater. 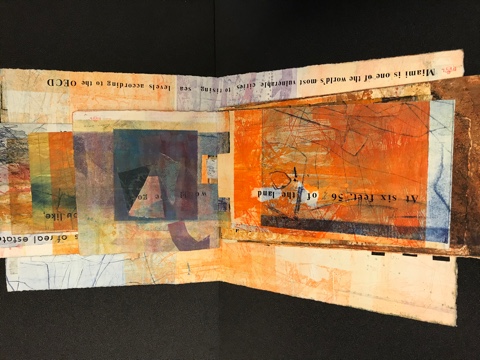 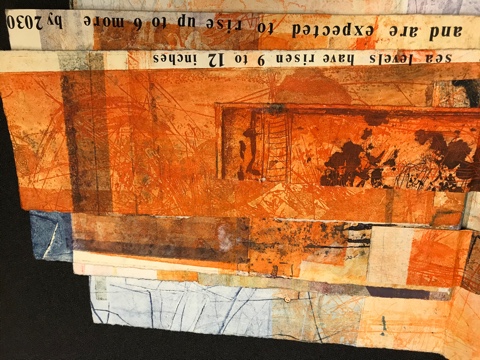 Posted by Americas Team at 9:19 AM