This autumn the Eccles Centre has been hosting a series of events and activities for researchers interested in gender and US politics. The programme will conclude with two days of activities this week, including a public, online event exploring the process of communicating women’s history through exhibitions, Staging Women’s History, on Thursday 16 December at 17.00 GMT, which is free to attend and open to all.

In previous events, the group has explored different aspects of the British Library’s collections, including sheet music, poetry, and fiction, which network member, Dr Eir-Anne Edgar, explores in more detail in this post.

In October 2021, thousands came out to protest a restrictive new anti-abortion law in Texas, which allows individuals to sue anyone suspected in assisting in or receiving an abortion after six weeks of pregnancy. Images of the protests capture the scene – some women in bright pink pussy hats, many protestors armed with homemade signs and banners, and some wearing long red cloaks and large white wimples or bonnets that conceal much of the wearer’s face – the costume made famous by the television adaptation of Margaret Atwood’s 1985 novel, The Handmaid’s Tale and worn by the Handmaids of the novel’s title. 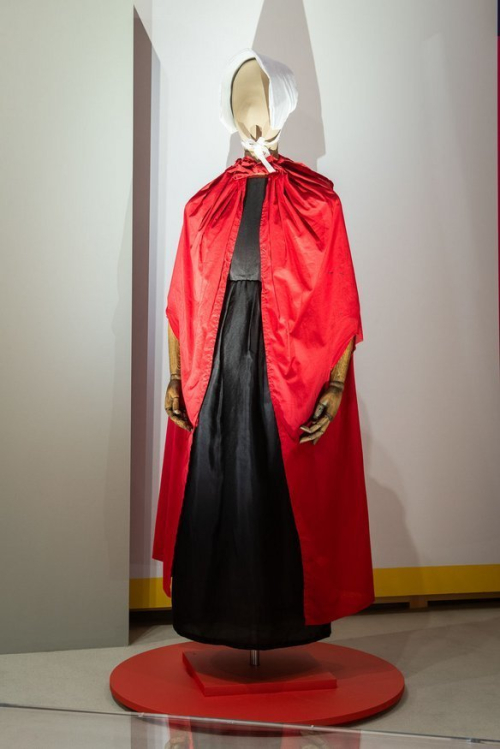 Culturally, the costumes have come to be synonymous with the oppression of women by a Christian, patriarchal society that restricts women’s political and individual freedoms and punishes rule-breakers with physical and emotional violence. Even more significantly, the costumes represent the bravery and cunning exercised by women who have had enough and push back against oppression, as protagonist June/Offred does, rescuing children and women tormented in Gilead’s society.

Atwood’s follow-up to The Handmaid’s Tale, the highly anticipated 2019 novel, The Testaments, captures the zeitgeist of the Trump presidency. Without revealing too many spoilers, readers see Offred’s legacy via the brave actions of a few young women – some in Gilead, some across the border in Canada – as well as a surprising twist from characters familiar to readers from The Handmaid’s Tale. Told in alternating perspectives from three different women, it seems that Atwood is underscoring the way in which women must work together to implement societal change. In particular, The Testaments illustrates the power that narrative has. A secret library, tucked deep in the recesses of Gilead, contains forbidden books that portray “problematic women” who deviate from their social norms. “Jane Eyre, Anna Karenina, Tess of the d’Urbervilles, Paradise Lost, Lives of Girls and Women – what a moral panic each one of them would cause if set loose among the Supplicants!” (Atwood, 35). 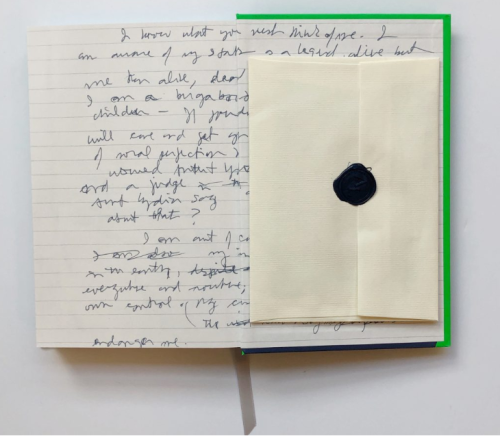 Special edition of The Testaments (2019) from Pelee Island Bird Observatory. Inside back cover showing envelop for bonus material. 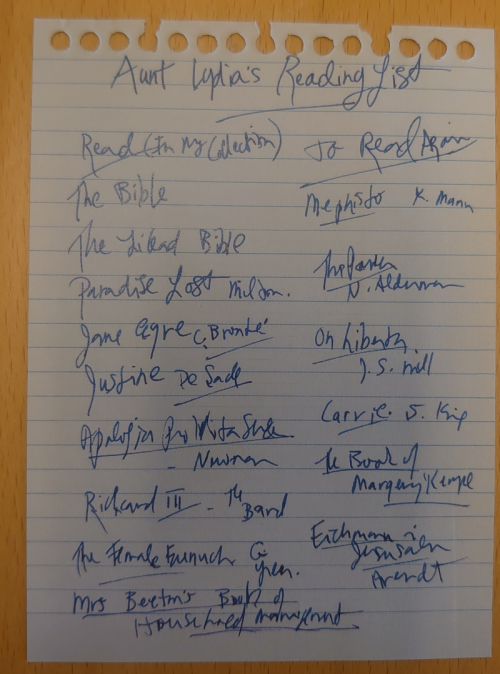 These books, like 'The Testaments' itself, have the power to impact culture and society. As Atwood herself has noted, the Trump administration’s attempts to limit the rights of immigrants, women, LGBTQI people, and other members of marginalized groups have inspired her work.

In my research, I examine how dystopian fiction such as Atwood’s novels addresses contemporary feminist political issues and movements, including the #metoo movement and the fourth wave feminist movement’s drive for reproductive justice. Although my project focuses on recent iterations of women’s writing and their corresponding political issues, it is important to note that there is a much longer history of feminist dystopian novels that imaginatively reframe contemporaneous social and political issues. We can also see this in the work of authors such as Charlotte Perkins Gilman, whose utopian trilogy (written in 1909, 1915, and 1916 – yet not published until the 1970’s) portrays a world without men, one in which women are breadwinners and are able to procreate without men, and emphasizes the necessity of community, education, and the malleability of gender roles. 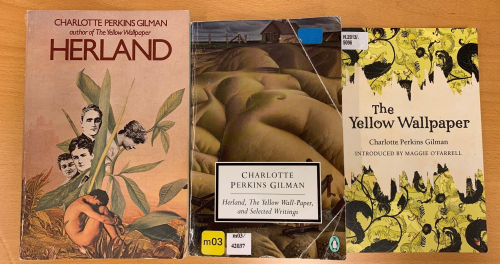 Gilman’s short story, “The Yellow Wallpaper,” arguably her most well-known story, was re-printed in 1973 by Feminist Press. Originally written in 1892 and, like her utopian trilogy, first published in her periodical The Forerunner, Gilman’s work was “rediscovered” by second wave feminists and struck a chord with a new generation of readers. The Yellow Wallpaper illustrates many 19th century women’s issues, such as the limitations of the domestic sphere, medical treatment for women’s mental and physical health issues, the pressures of motherhood and marriage, and more. For second wave feminist readers, the worlds that Gilman portrays in her work, imagined and real, resonate from the 19th century and into the 70’s, much in the same way that the Reagan-era issues captured in The Handmaid’s Tale reverberate in 2021.

The “Gender and US Politics” group discussed Gilman’s short story and Atwood’s latest novel during a meeting that focused on fiction. Given my current research project, I was very excited to discuss these materials with others. I am one of just a few literature scholars in the group, which is also composed of historians, political scientists, and members of diverse disciplines. Listening to those outside of my expertise was one of the most interesting (and inspiring) aspects of the meeting. For instance, several scholars research suffragism in the US and abroad, and their contributions shed light on new ways of thinking about the literature, particularly in considering Gilman’s work. The opportunity to be part of a transdisciplinary group of scholars with intersecting research interests has helped me “see” the literature I work with in new ways, such as making connections between Atwood’s novels and television adaptation with Gilman’s writing, first published almost one hundred years before. It has also helped me to see how literature resonates over time with readers and how political issues can morph or remain the same, despite the political progress women have made.

Dr Eir-Anne Edgar is Associate Professor of Literature in ILU at the Norwegian University of Science and Technology (NTNU) in Trondheim, Norway. She is currently at work on her research project, Women in the Wastelands: The World-Making of Feminist Critical Dystopian Fiction, which explores the recent explosion of transnational, feminist dystopian novels and the ways in which they “re-make” or “re-see” real-world issues. Though the Wasteland may seem like a strange place to locate hope, this project finds that women authors have long located frustrations with the limitations placed against gender and sexuality within the pages of dystopian and utopian novels.

The Gender and US Politics project, coordinated by Cara Rodway (Eccles Centre) and Robert Mason (University of Edinburgh) is supported by the British Association for American Studies and the US Embassy London.

Posted by jean.petrovic@bl.uk at 6:00 AM