It commemorates the 75th anniversary of Viola Desmond’s refusal to leave a whites-only section of a Nova Scotian movie theatre - an action that galvanised the modern civil rights movement in Canada. It celebrates the British Library's acquisition of a stamp commemorating the Canadian journalist and social activist Carrie Best. And it illuminates how these two wonderful women are connected. 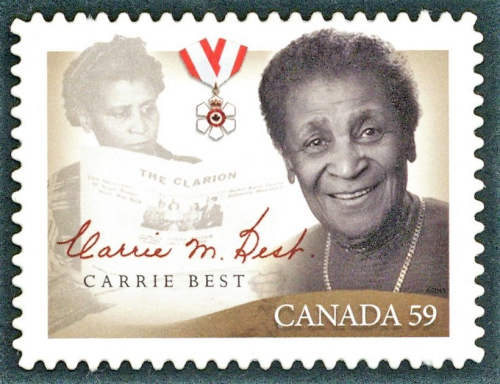 In the mid-1940s, Viola Desmond was a successful businesswoman and entrepreneur. As a young Black woman, she had been unable to train as a beautician in Halifax, Nova Scotia. After honing her craft elsewhere – including at Madame C.J. Walker’s beauty school in New York City – she had returned to Halifax and established a beauty salon, her own line of beauty products, and the Desmond School of Beauty Culture, which she hoped would prevent other Black women from facing similar obstacles to their training.

On 8 November 1946, Desmond was travelling on business when her car broke down in New Glasgow, Nova Scotia. Forced to stay overnight, she decided to see a movie. At that time, racial segregation in Canada varied according to place and context. After taking a seat in the Roseland Theatre’s 'Main' section, Desmond was informed that she could not remain there. Returning to the kiosk, she was told she could not purchase a ticket for this whites-only section. Rather than heading to the Blacks-only Balcony, however, Desmond chose to return to the Main section. She was then forcibly removed by a policeman and sent to jail overnight. The following morning, without being offered legal representation, she was tried and fined $20 for defrauding the government of one penny; the difference in Entertainment tax between the Main and Balcony sections. With the support of prominent members of Halifax’s Black community, Desmond fought this decision. Yet several months later, the Nova Scotia Supreme Court upheld the original verdict. 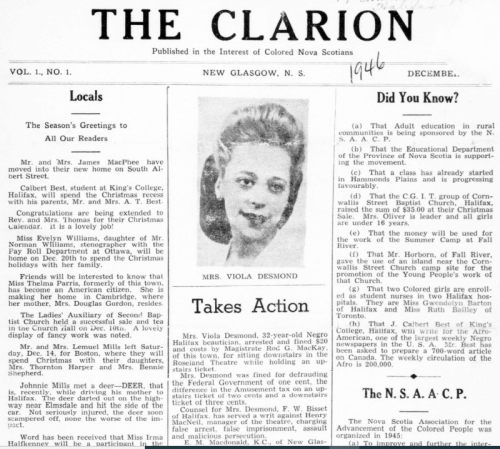 One of those who supported Desmond was Carrie Best. Three years earlier, Best – a life-long Black resident of New Glasgow – had bought tickets for the Roseland’s Main section for herself and her son. Like Desmond, they were arrested for attempting to watch a movie. They fought the charge in order to challenge the legal justification for the theatre's segregation, but their lawsuit was also unsuccessful. Best responded by establishing The Clarion, the first Black owned and published newspaper in Nova Scotia, which has now has been digitised by the Nova Scotia Archives. With its by-line 'Published in the Interest of Colored Nova Scotians', it was the very first issue of The Clarion that broke Viola Desmond’s story (Fig. 2).

Interest in Desmond’s case soon spread not only across Canada but also the United States; the article below, for example, was published in the Baltimore Afro-American on 1 February 1947:

Fig. 3: Article about Viola Desmond's case in The Baltimore Afro-American, 1 February 1947; this newspaper is available digitally to British Library Readers.

Interestingly, A. Ritchie Low, a reporter for the Baltimore Afro-American, had interviewed Carrie Best in the summer of 1946 while investigating the lives of Black Canadians in the Maritime Provinces (Fig. 4, below): 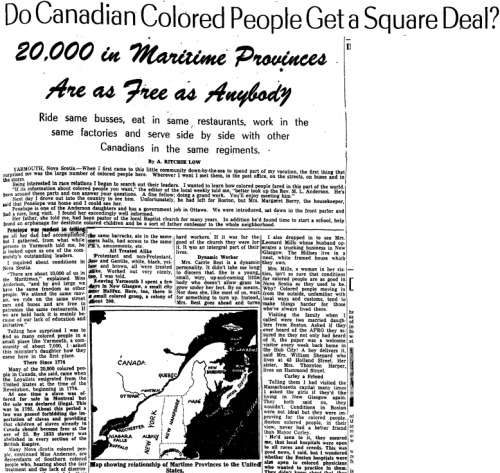 Fig. 4: Extract of an article from The Baltimore Afro-American, 14 September 1946; this newspaper is available digitally to British Library Readers.

Best had made it clear to Low that things were far from perfect for the Black community and had shared with him her experience at the Roseland as well as her plans for her newspaper. Low was clearly impressed with her, writing (in language somewhat of its time):

Mrs Carrie Best is a dynamic personality. It didn't take me long to discern that. She is a young, small, wiry, up-and-coming little body who doesn't allow the grass to grow under her feet. By no means. Nor does she, like most of us, wait for something to turn up. Instead, Mrs Best goes ahead and turns up something! For example, one of the local theaters forbade colored people to enter its downstairs section; they must go upstairs, insisted the manager. They didn't like it, but did nothing to express their disapproval, that is to say, all except Carrie Best.  She went in, sat downstairs and made a test case. She didn't win out, because of some technicality of the law, but she still has hopes of doing something. "I must show you a little paper I'm editing," she told me, excusing herself to go and fetch it. (Baltimore Afro-American, 14 September 1946)

Subsequently, Best started a radio show in 1952 which ran for twelve years, and between 1968-75 she was a columnist for The Pictou Advocate. Sadly, Desmond did not fulfil her dreams of opening a chain of beauty salons and would move away from Halifax. Yet her courageous actions are now credited with kickstarting the modern movement for civil rights and racial equality in Canada.

In recent decades, both women have been recognised and honoured. In an historic first, Viola Desmond was posthumously pardoned in 2010. The Crown-in-Right of Nova Scotia also apologised for prosecuting her for tax evasion and acknowledged that she was rightfully resisting racial discrimination. In 2018 she became the first Canadian woman to appear alone on a bank note.

Carrie Best was made an Officer of the Order of Canada in 1979 and posthumously awarded the Order of Nova Scotia in 2002. The 59c stamp commemorating Best (Fig. 1) was issued to mark Canada’s Black History Month in February 2011.1  We are hugely grateful to our Philatelic colleagues for acquiring this significant stamp on behalf of the British Library.

1. The stamp was designed by Laura Minja and manufactured by Lowe-Martin using a lithographic printing process.