Today we celebrate the 30th anniversary of Dr Roberta Bondar blasting off from the John F. Kennedy Space Center and becoming Canada’s first female astronaut and the world’s first neurologist in space!

Bondar had dreamt of this moment from an early age. As a child she showed an aptitude for science and when she was around 12 years old her father built her a laboratory in their basement. Following high school, she obtained a Bachelors degree in Zoology and Agriculture, a Masters degree in Experimental Pathology, and a PhD in Neurobiology. She became a medical doctor in 1977 and was admitted to the Royal College of Physicians and Surgeons of Canada (in neurology) in 1981.

When Canada's National Research Council set up the Canadian Astronaut Program, Bondar immediately signed up. She was selected in December 1983. In 1986 the Challenger disaster threatened the entire space shuttle programme. However, a three-year investigation resulted in its revival and in 1990 Bondar learned she would be the next Canadian astronaut to go into space. 1 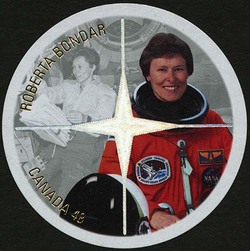 48c stamp by Canada Post celebrating astronaut Roberta Bodnar. It was issued in 2003 as part of a series of eight stamps honouring Canadian astronauts and the space programme that made their work possible. The British Library's Philatelic Collection: General Collection.

Along with six colleagues, Bondar was on board the Space Shuttle Discovery from 22 - 30 January 1992 as part of the first International Microgravity Laboratory mission - the precursor to the International Space Station. The main goal of the mission was to study the effects of microgravity on a variety of organisms and the physiological changes that occur in a weightless environment. As ‘Payload Specialist 1’, Bondar conducted over 40 advanced experiments for 14 countries. Many of these focused upon the effect of weightlessness on the human body - for example, on eye motion, the inner ear, the elongation of the spine and back pain, and energy expenditure during a spaceflight. Others explored the effects of microgravity on other life forms, including shrimp eggs, lentil seedlings, fruit fly eggs and bacteria. 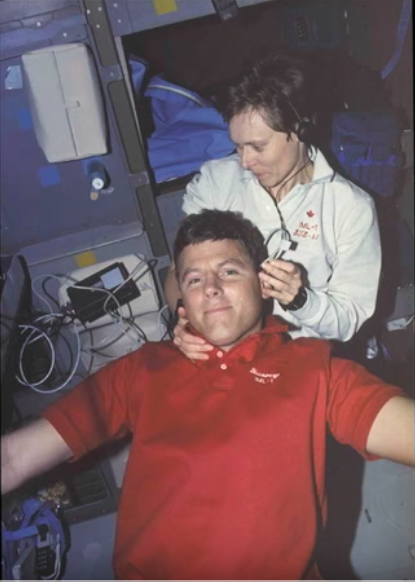 Dr Roberta Bondar using a Doppler ultrasound during her 1992 flight on board Space Shuttle Discovery; Stephen Oswald, the pilot, volunteered for this experiment for Bondar's own research into blood flow to the brain. Image courtesy robertabondar.com 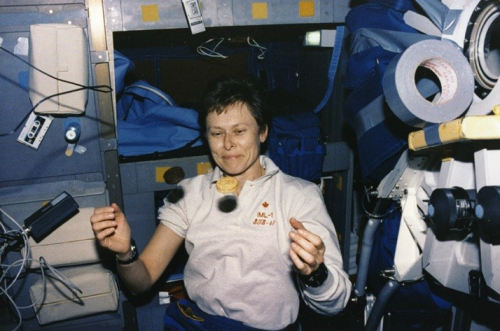 Bondar's ground-breaking work enabled NASA to better prepare its astronauts for long stays on the International Space Station. Following her career as an astronaut, she collaborated with NASA and led a space medicine research team investigating the neurological symptoms seen after spaceflight and their connections to neurological illnesses on Earth, including Parkinson’s disease and stroke.

After many years working as a scientist, Bondar forged a new path and became an Honours student in Professional Nature Photography at the Brooks Institute of Photography in California; here, she was profoundly influenced by the work of renowned American photographer, Ansel Adams. She later created the Roberta Bondar Foundation and writes of this transition:

It took time, considerable reflection and detailed planning to build a Foundation focused on two of my passions, the environment and education. Following the razor-sharp focus and discipline involved in being an astronaut and scientist, I chose to apply my love of photography to foster sustainable development. Few get to view our earth from space. It puts unimaginable perspective on life and our stewardship of the planet. I made it the catalyst to a new career. My camera lens is my way of giving back in exhibits, seminars, schools across Canada and overseas.

For her book Passionate Vision: Discovering Canada’s National Parks (Vancouver: Douglas & McIntyre, 2000; British Library shelfmark LB.31.b.21551), Bondar photographed Canada’s 41 national parks from Gwaii Haanas in the west to Terra Nova in the east, and Point Pelee in the south to Quttinirpaaq in the north; the book includes 100 of her photos as well as six images from space.

Now in her mid-70s, Roberta Bondar remains tireless in her commitment to environmental and scientific education and to deepening humanity's love for planet Earth. She is an Officer of the Order of Canada, a Specially Elected Fellow of the Royal Society of Canada, holds the NASA Space Medal and has her own star on Canada’s Walk of Fame. 1. On 5 October 1984, Marc Garneau became the first Canadian to go into space; he went on two further missions in 1996 and 2000. Roberta Bondar was the second Canadian in space.