In October 2021 the British Library was delighted to welcome – albeit virtually – Inuit Environment, Cultural and Human Rights Advocate Sheila Watt-Cloutier to an ‘In Conversation’ event with Polly Russell, Head of the Eccles Centre.

Watt-Cloutier’s account of the impact of climate change upon Inuit communities during her own lifetime was utterly compelling. Extraordinarily – and perhaps in defiance of audience expectations in the run-up to COP26 – her perspective on the future was startling optimistic, evincing as it did an absolute conviction in our capacity to bring about the necessary changes at this critical time.

This hour-long conversation, which includes a powerful contribution from proud Inuk youth, Ashley Cummings, can now be viewed in full on the British Library Player; please do take a look – it will leave you moved, informed and inspired.

Fuller details about Sheila, Ashley and Polly can be found below: 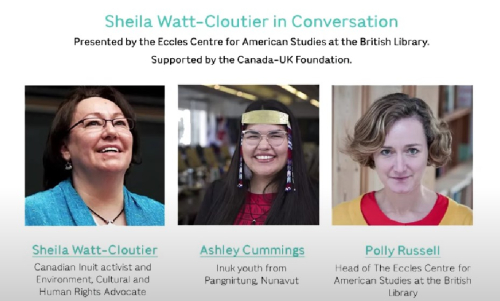 Sheila Watt-Cloutier was born in Nunavik, Québec, and has for decades represented the issues pertaining to the protection of Inuit culture and the Arctic. In 1995 she was elected President of the Inuit Circumpolar Council (ICC). As its spokesperson, she played a critical role in the UN negotiations to ban the use of Persistent Organic Pollutants which had been polluting the Arctic food chain. More recently, she has focused upon the impact of climate change on Inuit communities. As Chair of ICC representing the four countries of Canada, Alaska, USA, Greenland and Russia where 165,000 Inuit reside, in 2007 she launched the first legal petition to the Inter American Commission on Human Rights, linking climate change to human rights. That same year, Watt-Cloutier was nominated for the Nobel Peace Prize. In 2015 she received a 2015 Right Livelihood Award for her work on climate change in the Arctic and has been awarded the Aboriginal Achievement Award, the UN Champion of the Earth Award, and the prestigious Norwegian Sophie Medal. Her book The Right to be Cold: One Woman’s Story of Protecting Culture, the Arctic and the Whole Planet (Toronto: Allen Lane, 2015; British Library shelfmark YD.2016.a.285) was published in 2015.

Ashley Cummings (she/her) is from Pangnirtung, Nunavut and is currently living in Whitehorse, Yukon. She is working for the Training Policy Committee and studying Indigenous Governance at Yukon University. She is a graduate fellow with the North American and Arctic Defense and Security Network, and is a leading voice for climate advocacy. As a previous member of the Prime Minister’s Youth Council, Ashley advised the Prime Minister on issues that have included (but are not limited to) rural and northern health/well-being, supporting ethical and Indigenous-led tourism, mental health and other issues affecting youth across Canada. Her colourful background living in Nunavut, Yukon, Nova Scotia, Quebec and New Brunswick has given her a comprehensive perspective on life for Indigenous young people from coast to coast to coast.

Polly Russell is Head of the Eccles Centre for American Studies at the British Library. Polly read American & Commonwealth Arts at Exeter University, was awarded a Masters in Journalism at Louisiana State University and holds a PhD in Human Geography from the University of Sheffield. Her research focusses on twentieth century women’s activism and feminism as well as the history and politics of food. Since 2012 Polly has had a column in the Financial Times Saturday magazine, The History Cook and she is the historical presenter on the BBC2 history series Back in Time.

Posted by jean.petrovic@bl.uk at 3:12 PM