Slavery and the Sugar Trade: cataloguing five bills of lading

N.B. This article may contain descriptions which are outdated and/or culturally/racially insensitive 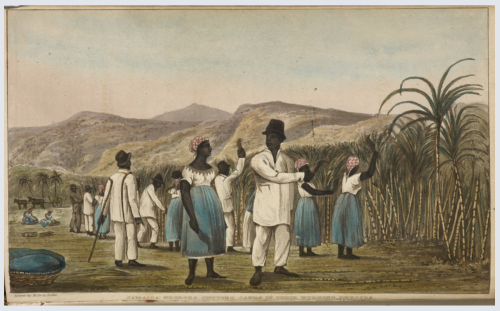 Slave sugar sweetened the British economy for over three hundred years. As abolitionist discourse grew over the course of the 18th century, the operations of British-owned Caribbean sugar plantations became a contentious subject. Even after abolition, the economics of the post-emancipation sugar trade remained a bitter question in British politics. In 1848, amidst revolutions and financial crises, it was sugar that dominated debate in the Commons, as Disraeli noted in his biography of Bentinck:

“Singular article of produce! What is the reason of this influence? It is that all considerations mingle in it; not merely commercial, but imperial, philanthropic, religious; confounding the legislature and the nation lost in a maze of conflicting interests and contending emotions”[1].

The library has recently acquired five bills of lading dating from 1714-1800.  They are printed forms recording the receipt of goods transported by sea, with gaps for the addition of specific information by hand.  In their printed contents alone, they are unassuming pieces of administrative ephemera. However, the devil is in the details. Three of the bills were completed by Dudley Woodbridge on behalf of the Society for the Propagation of the Gospel in Foreign Parts, an organisation that lobbied for the greater influence of the Church of England within Britain’s burgeoning empire.  The Society spanned the Atlantic, including Barbados, where it operated a slave-worked sugar plantation[2]. It is from this plantation that these bills originate.

They detail three separate shipments of sugar from Barbados to England from May 1714 to April 1715. Though all three are penned by Woodbridge, each bill lists a different ship and captain. More can be learned of these ships when cross-referenced with the Trans-Atlantic Slave Trade Database. For instance, one bill details a shipment transported upon the ship ‘Smith Frigate’, captained by John Riding, and signed in Barbados, 29th April 1715. When searching the database for ‘Smith Frigate’, one finds a detailed entry which tells the story of a 200 ton ship, responsible for carrying 287 enslaved people from Cape Coast Castle to Barbados in 1714. Fourteen people died during middle passage of this voyage[3]. The ship returned to England in 1715, taking the sugar with it. By presenting this information side-by-side, we can contextualise the sugar trade and its inextricable relationship with slavery in the 18th century. Image 1. One of the 'Three bills of lading' (processing shelfmark) 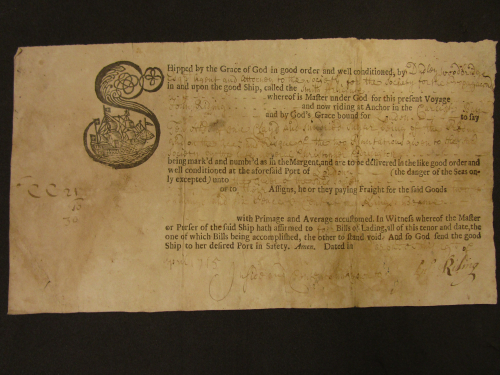 Image 2. One of the 'Three bills of lading' (processing shelfmark) 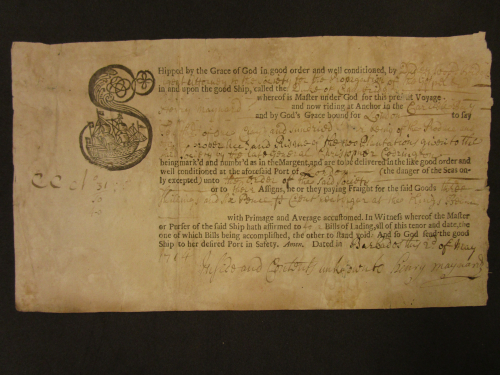 Image 3. One of the 'Three bills of lading' (processing shelfmark).
Images 1-3: Three bills of lading completed by Dudley Woodbridge on behalf of the Society for the Propagation of the Gospel in Foreign Parts. The bills refer to three separate shipments of sugar, sent from Barbados to England, between April 1714 and May 1715

Another bill details the transport of twenty hogsheads of sugar from Kingston to London in April 1778. It is signed by the carrier, Captain James Moore, and the form has been completed by the agent, Malcolm Laing. Once again, this document is enriched when compared against databases. Laing appears on the UCL Legacies of British Slavery database as a resident slave-owner from Kingston[4]. During probate of his estate in 1782, he owned 93 enslaved persons, 44 of which were male and 49 female. 30 were children. Unlike the other bills, this one survived with its original paper envelope. The envelope is addressed to William Philip Perrin, owner of five estates in Jamaica, inherited from his father[5]. Further archival evidence attests to the scale of Perrin’s operations in Jamaica, where enslaved persons were forced to labour on sugar plantations, further engorging Perrin’s healthy capital. The sale of sugar from these plantations turned a profit of £4,500 per annum, equivalent to approximately £400,000 today[6]. Perrin never visited Jamaica. 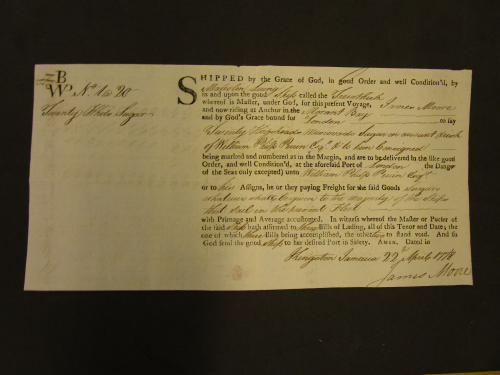 Recto of the bill of lading detailing the shipment of twenty hogsheads of sugar from Perrin's plantation in Jamaica, to England. Signed by Malcolm Laing. Verso of the bill of lading detailing the shipment of twenty hogsheads of sugar from Perrin's plantation in Jamaica, to England. Signed by Malcolm Laing 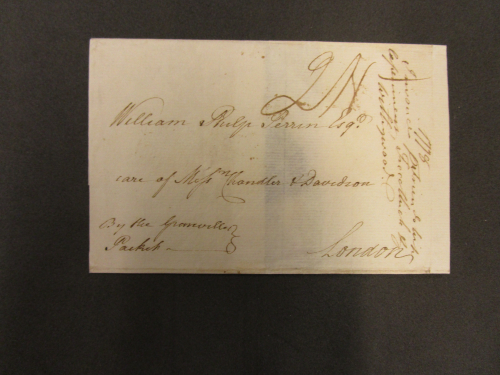 Envelope belonging to the above bill of lading, detailing the name of the recipient, William Philip Perrin (processing shelfmark)

Careful consideration has been given to how these items are catalogued. It was important to contextualise these items, using supporting information drawn from databases such as those mentioned above. Unsurprisingly, none of these refers to the individuals who were kidnapped, sold, and enslaved for the production of sugar. Yet, sugar and slavery are inextricably related, and to describe such resources without any indication of this association would be reductive. Subject headings related to slavery have been included alongside those of shipping and trade. Summary notes have been added to enhance the historical context of the documents, and citations refer to the databases where this information is collated. One inescapable tragedy is that the enslaved individuals from these plantations cannot be named, but their slavers can. For named individuals, such as William Philip Perrin and Malcolm Laing, authorised name entries have been created, with adequate biographical information detailing who they were and how they made their money. By linking our catalogue records with data from other sources, we are able to enrich our metadata to contextualise these documents, and provide a valuable description of what they are and what they represent.

[2] The Society for the Propagation of the Gospel in Foreign Parts in obo in Atlantic History (Accessed  December 2021).

Posted by Annalisa Ricciardi at 4:37 PM