The Advent of a Newspaper

This is the first of a series of blogs looking at Cherokee language printing.

Whilst exploring the British Library’s North American Indigenous language materials as part of my PhD research, I came across Frank Brannon's Cherokee Phoenix, Advent of a Newspaper: the print shop of the Cherokee Nation 1828-1834 (Fig 1, below). The book tells the fascinating story of the first newspaper printed in an Indigenous language at the Cherokee Nation's capital of New Echota (near what is now Calhoun, Georgia). As a papermaker, printer and book artist from Knoxville in East Tennessee, Frank grew up not far from both the birthplace of Sequoyah (the Cherokee inventor of the syllabary that enabled printing in the Cherokee language) and the papermill that supplied the paper for the first edition of the Cherokee Phoenix. 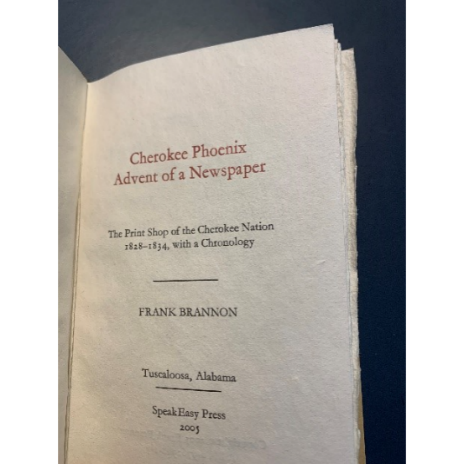 In 1809 Cherokee speaker Sequoyah embarked on committing the Cherokee language to paper. He was fascinated by books (or 'talking leaves') and the power of the written word, but not all shared in this fascination. On the 18th of August 1828, the Cherokee Phoenix reported that Sequoyah had been 'strenuously opposed by all his friends and neighbours' in his task. In response, 'he would listen to the expostulations of his friends and then deliberately light his pipe, pull his spectacles over his eyes, and sit down to his work, without attempting to vindicate his conduct', an account that wonderfully evokes the famous image of him (Fig 2, below). 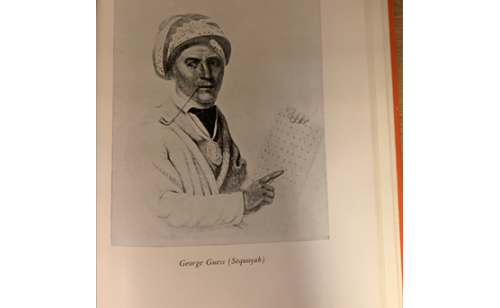 Sequoyah initially created a character for every word in Cherokee. He may have been influenced by other alphabets and reportedly had an English spelling book in his possession. Finding that this yielded too many characters, he separated the words into parts and assigned a character to each component: hence, a syllabary (Fig 3, below).

Sequoyah listened, remembered and added, and in 1821 he completed his 86-character invention. It took some effort to convince Cherokee speakers to use it, but learning was quick once persuaded. This was because it was made by and for native speakers (unlike the Roman orthographies imposed by missionaries at the time), and once a speaker learnt 'the alphabet', they could read. Within seven years, Cherokee literacy had accelerated, and a national press had been established. Even before the characters appeared in print, they became a tangible part of life and the landscape. An observer in a later newspaper, the Cherokee Advocate, wrote that when travelling through the Cherokee Nation in 1828 'I frequently saw as I rode from place to place, Cherokee letters painted or cut on the trees by the roadside, on fences, houses and often on pieces of bark or board, lying about the houses.' Whilst Sequoyah was not directly involved with the Cherokee Phoenix, he would regularly travel to the Dwight Mission in Oklahoma to collect the latest issue sent to him from Georgia. 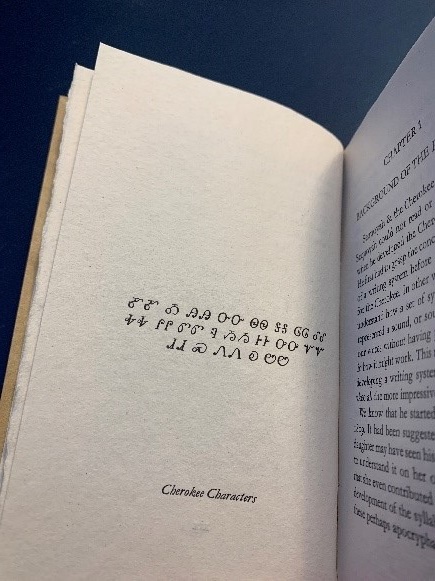 In Frank’s book, we follow printers John Foster Wheeler and Isaac Harris as they journeyed together in 1827 from Jasper, Tennessee to the printing office made of 'hewed logs' in New Echota. There, they met editor and Cherokee Elias Boudinot and missionary Samuel Worcester. The materials - the paper, typecast and press - arrived from Boston in early 1828 and the first edition appeared on 21st February 1828. A fifth of the four-page newspaper was printed in Cherokee, reflecting the difficulties of translating and printing between English and Cherokee.

The potential input of US type casters and Worcester in designing the typecast alters how the characters appear in print. Worcester also re-arranged Sequoyah’s characters to reflect the sounds expressed through Roman letters (Fig 4, see below). Despite this, the syllabary was a Cherokee initiative in its creation and use. Frank writes that "the complexities in the purpose of the newspaper should connotate the difficulties of the era: a true crucible where no one purpose may be clearly stated". This captures the turbulent history the newspaper shared in, seen through its engagement with debates on forced removal and Cherokee sovereignty, and in the newspapers eventual demise. Frank’s quote also captures the complex context of print as a technology tied to the ‘civilising’ mantra of colonialism. Through the story of the Phoenix however, we can understand how print also existed (and exists) as a tool of Indigenous agency, used and expanded to meet Indigenous motives and intellectual traditions.

The last edition of the Phoenix appeared on the 31st of May 1834. In the following year the printers moved westward, the State of Georgia, at the behest of the US Federal Government, seized the printing press and the editor of the newspaper, Elias Boudinot, signed the controversial 1835 Treaty of New Echota - the precursor to the mass forced removal of Cherokees in the 1838 Trail of Tears. 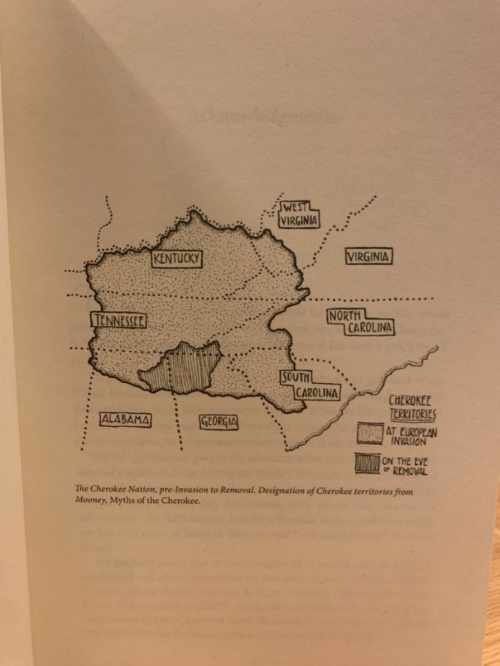 In 1954, the typecast was excavated from a well nearby to the original printing office. Frank’s work includes reproductions of hand impressions of this type which he uses to make conclusions on printing activities at New Echota in the early nineteenth century (Fig 5, see below). 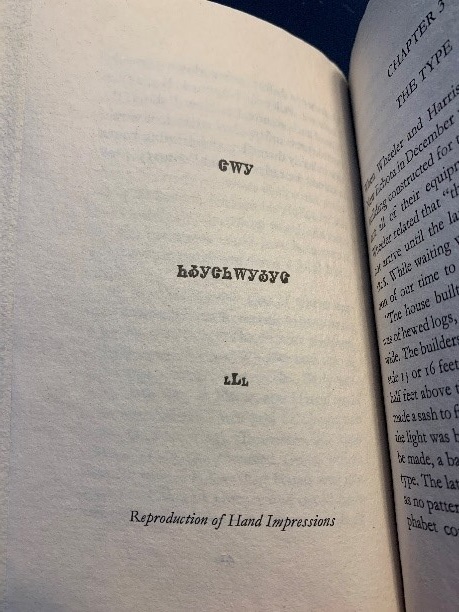 Frank’s book brings together the history of the materials and people joined in the creation of the Cherokee Phoenix and uses those historic materials within its own creation. Through it, we encounter a handmade letterpress book that both emulates and extends the story of the historical materials used to print the Cherokee Phoenix. It is form and content connecting and reaching back through time, speaking to the afterlives of those materials and extending the story of Cherokee language printing.

Posted by Francisca Fuentes Rettig at 9:34 AM