The Value of Libraries: a report from the Hay Festival, Cartagena, Colombia

Catherine Eccles is an international literary scout and council member of the Eccles Centre.

'Every library is a journey; every book is a passport without an expiry date.'
Irene Vallejo

It was through the good fortune of my involvement with the Eccles Centre that last month I found myself sitting in the arcaded courtyard of the Santa Clara Hotel – originally built as a convent in 1621 - in Cartagena, Colombia. Tall palm trees and an array of the healthiest tropical plants crowded the central space, while a variety of birdsong reminded me that I was in one of the most biodiverse countries in the world.

I was there to attend the Hay Festival, which through the year holds three Latin American book festivals – one in this fortressed former colonial port town on the Caribbean coast, the others in Peru and Mexico. More specifically, I was there to talk about the Eccles Centre Hay Festival Writer’s Award. 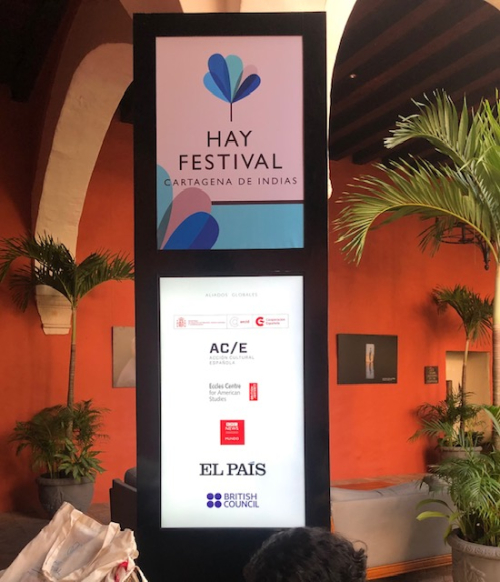 Signage for the Hay Festival, Cartagena, Colombia, 2022. Image, author's own.

The award was established ten years ago, set up for authors whose works-in-progress would benefit from research in the British Library’s American collections. Initially the focus was on the North American and Caribbean collections. Then, three years ago, we journeyed south - heralded, as it turned out, by previous winner Andrea Wulf’s prize-winning biography of Alexander Humboldt - to include Spanish language writers and research in the library’s Latin American collections.1 Along with running the Writer’s Award, the Eccles Centre sponsors an event at each Latin American Hay Festival. This year the topic across the Eccles’ sponsored festivals is ‘The Value of Libraries’ - in a time when libraries have never been more relevant across the world. 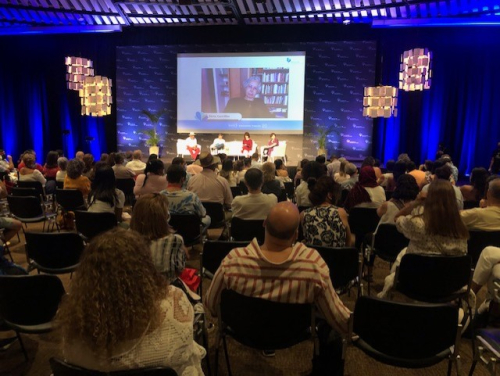 'The Value of Libraries' - the Eccles sponsored event at the Hay Festival, Cartagena, Colombia, 2022. Image, author's own.

The event in Cartagena took place just outside the walls of the old town of narrow streets and whitewashed houses with colourful balconies drooping with bougainvillea, in the Sala Barahona at the Centro de Convención. Cartagena is known as a party town, but at ten o’clock on a Sunday morning the room was full. Many in the audience were librarians, keen to hear from the panellists: Irene Vallejo, author of El infinito en un junco (Infinity in a Reed), and librarians and campaigners Martín Murillo, Silvia Castrillon and Luis Bernado Yepes. Murillo is a cult figure in Colombia, famous for taking books to the people in the streets in a cart similar to those used by the country’s fruit sellers. Yepes grew up in a large family in the barrios of Medellin and says books saved him from a life of crime and violence; and Castrillon creates book clubs to transform how people read. The discussion was moderated by famous children’s author and journalist, Yolanda Reyes. 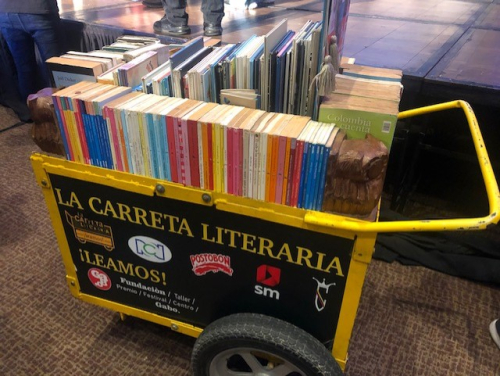 Over the four-day festival I learnt there cannot be a discussion on any subject without taking into account the legacy of decades of violence suffered by the Colombian people and the sociopolitical landscape that has emerged since peace agreement was signed in 2016. Books might be seen as a privilege, but the panel at Cartagena discussed them as something essential: a tool to save the world, a reminder of humanity especially in a time of violence and a gateway to knowledge that will help close the inequality gap. There was a suggestion that access to books and libraries should be a human right and there have been attempts to legislate for this in Colombia, so far unsuccessful. The work of libraries is an ethical as well as a political responsibility. Revolution is not always dramatic. It can be slow and writers and libraries can play a part in that, gradually changing the world. Libraries hold and keep knowledge safe, persevering history and memory and serving to thwart the circle of violence. Another event I attended at the festival was a discussion about the degradation of war and the importance of breaking silence and bearing witness in order to move on without forgetting for communities caught in the crossfire of warring factions. This is at the centre of a reconciliation process that in Colombia remains fragile

While I was there I read two books to help me understand this captivating but troubled country, one fiction and one non-fiction. The first was Evelio Rosero’s hallucinatory novel Los ejércitos (The Armies).2 This is set in a community beset by violence and is narrated by an old man whose grip on the horrific reality being played out on the streets of his town is slipping. The other was honorary Colombian Wade Davis’ Magdalena: River of Dreams, a journey down the great river that runs from south to north of the country.3 The book encompasses a history from pre-Colombian times, through Spanish occupation, independence and recent times. If there is one book to read to comprehend Colombia, Magdalena is a very good bet, but it was the searing ending of Los ejércitos that reminded me of how vital fiction can be in exploring difficult subjects in a way non-fiction cannot. Each has its essential role, which is reflected in the fact that the Writer’s Award is open to both. Writers and librarians are the custodians of narratives and testimony as well as ideas for the future across the world. Books indeed can save and transform lives.

Posted by jean.petrovic@bl.uk at 4:12 PM